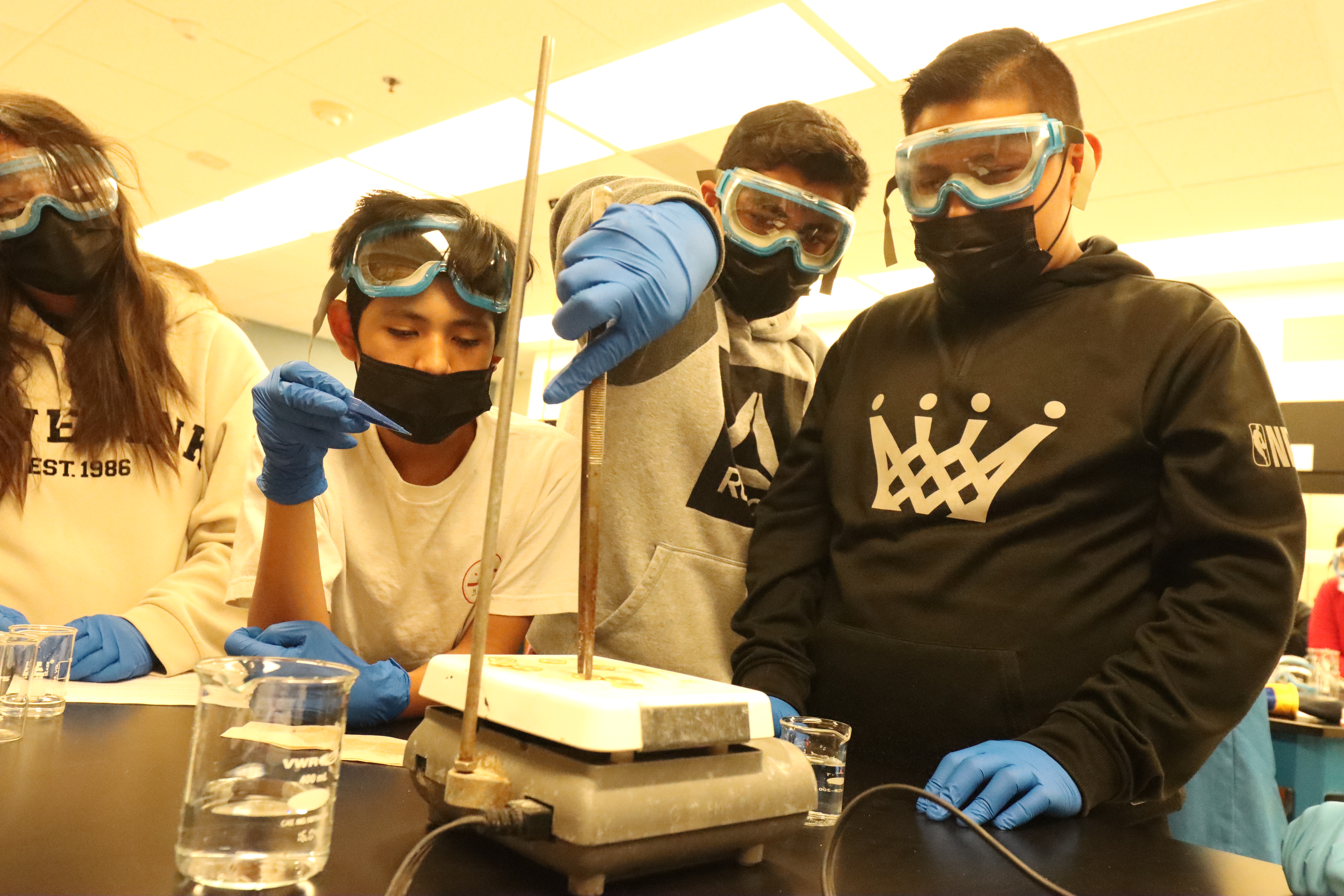 On March 1, about 40 students from Santa Ana’s Sierra Preparatory Academy visited UCI as part of the Laboratory Experiments and Activities in the Physical Sciences (LEAPS) outreach program, which aims to bring Santa Ana students from underprivileged schools to the four Physical Sciences departments so they can, perhaps for the first time in their lives, see science in action — as well as a career path they may have never known existed.

“I think middle school is an optimal time to increase interest in STEM as students begin to develop career aspirations — and being able to offer this experience to students at schools with limited facilities for STEM education reinforces its importance,” said Kara Ward, who’s the Program Coordinator for the Office of Access, Outreach and Inclusion and who’s the person who made this LEAPS event happen.

During the visit, Professor Maxx Arguilla, who’s one of the newest professors in the UCI Department of Chemistry, stood in his lab on the fifth floor of Frederick Reines Hall. He wore his blue UCI lab coat, and in a raised hand he held a pencil.

Arguilla, whose lab studies the quantum behavior of matter at subatomic scales, handed the pencil to one of his Ph.D. students, Steve Allison, who gathered the Sierra Prep kids around him. “We’re gunna see how we can turn this pencil lead into a single layer of carbon atoms,” said Allison. The idea: by sticking a piece of tape to the lead at the tip of the pencil, the students could — and did — remove a single layer of carbon atoms with just a flick of the wrist. “You’re like Superman!” Allison said as the kids did the same science that played a part in helping scientists win a Nobel prize in physics back in 2010.

Across the Physical Sciences quad, in Rowland Hall 261, grad students Lucas Johnson of Professor Chris Vanderwal’s group and Leah Salituro from Professor Scott Rychnovsky’s lab helped a group of students perform chemical reactions that, once upon a time, inspired one of our professors, James Nowick in the UCI Department of Chemistry, to pursue chemistry. The experiment involved putting copper pennies in a solution that helped turn the pennies other colors, like silver and gold.

The reaction conjured something else: laughter and whoops from the kids.

Then came a pronouncement: “We only have five minutes left, and we’re going to light things on fire,” said Salituro, who led the students to a fume hood in the lab, turned off the lights, and lit chemicals that burned different colors, like a green that Johnson described to the students as “very Slytherin” — a nod to a boarding house in the boy-wizard Harry Potter book and movie series where the mascot is a snake and the fires in the house glow green.

The flames died down, and a few minutes later across the quad in Croul Hall students gathered in the lab of Professor Eric Saltzman of the UCI Department of Earth System Science. Saltzman’s lab researches ancient cores of ice, and associate researcher Murat Aydin held up a piece of ice core for the students that he helped recover from Antarctica. “Did you see penguins?” One student asked. Aydin said that he hadn’t, that penguins in Antarctica only live near the coast and that this ice was from deep inside the continent’s interior. Aydin had the students hold the ice up to the light so they could see what the Saltzman lab is after: not penguins, but preserved air bubbles, which formed thousands of years ago, and which contain samples of the ancient atmosphere that scientists like Saltzman study to reconstruct the composition of the planet’s atmosphere over the ages.

“It was so exciting to see the students from Sierra take in all the day had to offer them,” said Ward. “I’m looking forward to the next LEAPS on May 13 with Mendez Middle School, and to ways this program can be expanded in the future to involve more UCI faculty, students and other middle schools.”

After the tour of Physical Sciences, the students gathered in front of the new Interdisciplinary Science and Engineering Building for boxed lunches and lemonade. Asked which of the experiments was their favorite, one group of kids simultaneously said “the coin one!” And almost immediately one of them pulled gold and silver coins from their pocket — souvenirs they’ll look to days and even months from now to remember their day of science and magic.