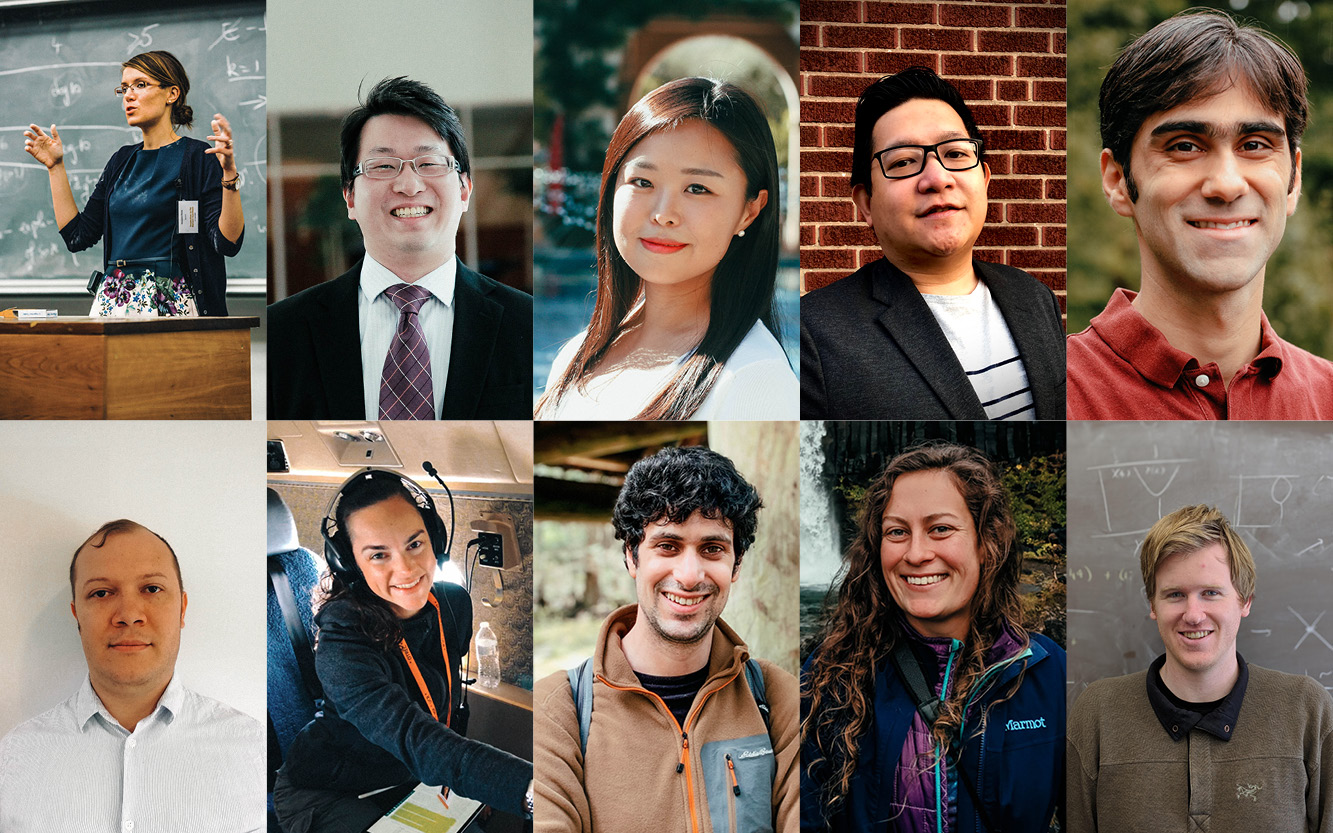 One flies through clouds so she can collect data useful for understanding climate change. Another uses cells to synthesize artificial materials, while yet another wants to discover geometric shapes no-one ever knew existed. These are just some of the ways the UCI School of Physical Sciences’ 10 new faculty do their work. Each looks at the physical universe through a different lens, but they’re all united in their common drive to extend their fields into uncharted latitudes.

Jane Baldwin, who’ll join the Department of Earth System Science in July of 2021, is a climate scientist who wants to understand how hazards like hurricanes and wildfires are going to change — and also amplify — as climate change unfurls. Baldwin explained that most of her work is computational, and that she doesn’t get into the field very often — but she once boarded a plane as part of the Organization of Tropical East Pacific Convection, which is a field research program that aims to uncover what drives the formation of deep clouds in the tropics. “I was one of the scientists there who helped provide guidance on what the weather reports were showing, and what would be interesting to investigate given existing theory about how the atmosphere circulates,” said Baldwin, who also sent weather balloons up into the atmosphere to collect data for the field campaign. The data Baldwin and others in the field campaign collected helps inform computer models that simulate Earth’s climate; the models, based on real-world observations like Baldwin’s, mimic everything from the way the oceans circulate to how clouds reflect sunlight back out into space. But Earth is complex, and there are many things scientists like Baldwin need to account for when they model it on computers. For that reason, getting the models to work properly can be a slow, incremental process. “A philosophical challenge of my work that I think about a lot is balancing the often-incremental pace of fundamental scientific discovery with the only too-immediate need for understanding climate risks in the face of global warming,” said Baldwin.

In July, Maxx Arguilla moved to Irvine from a postdoctoral position at MIT to start a faculty position in the UCI Department of Chemistry. Arguilla’s research happens at the three-way intersection between chemistry, physics and nanoscience. In that space, Arguilla and his research group explore the properties of materials that exist in a solid state — an effort that requires insights from a diverse array of scientists. “The most challenging, but, at the same time, very rewarding aspect of building and pursuing an interdisciplinary and materials-focused research program is the establishment of meaningful and mutual scientific collaborations,” said Arguilla, who received his Ph.D. from The Ohio State University in 2017. At UCI, Arguilla will be able to draw from a diverse pool of research talent from across multiple disciplines — and also physical spaces, including “the excellent infrastructure and user facilities geared towards materials-focused research, such as the Irvine Materials Research Institute and the Integrated Nanosystems Research Facility,” he said.

Sim is a chemist who uses a plethora of disciplines to do her research; Sim and her team use a mixture of chemistry, bioengineering and materials science to, for example, create artificial soft materials using living cells. “The effort to include living cells as a part of materials has been attempted before, but my laboratory will view this challenge quite differently than others,” said Sim, who got her Ph.D. from the University of Tokyo, and who started at UCI on July 1 of this year. “We’ll explore strategies to employ engineering of living microbial cells to function as active components of 3D-printed materials.” Such a multidisciplinary approach is hard, Sim explained, as it can be tricky to align different disciplines and aim them at the same research target. “But, at the same time, it’s the most fun part of our research, just like stepping in fresh snow,” said Sim.

Kenneth “Kenny” Ascher will join the UCI Department of Mathematics in July of 2021. Ascher grew up in New York, went to Brown University for his Ph.D., and then went to MIT and to Princeton for postdoctoral work. If Ascher saw a map showing the path he took from city to city over the course of his studies, odds are decent that he could tell you what kind of shape his path created. That’s because Ascher’s research goal is to classify new geometric shapes. His work dances around the line between shapes and algebraic equations called polynomial equations; “there’s a rich interplay between the algebra and the geometry,” Ascher said. “My research aims to classify these geometric shapes, while also trying to understand what the geometry of the shapes can tell us about specific solutions to these polynomial questions.” The hard part of the work, Ascher explained, can be figuring out the right kinds of problems to solve. “The problems have to be interesting, but at the same time tractable,” he said.

Alexandra Florea’s a mathematician who got her Ph.D. at Stanford University in 2017. Now an NSF Postdoctoral Fellow at Columbia University, Florea will join the Department of Mathematics in July of 2021, and when she arrives she’ll be bringing some questions with her. “I’m working in an area of math called analytic number theory,” Florea said. “The questions we study in the field concern prime numbers — those numbers which are only divisible by one and themselves.” Prime numbers, Florea explained, are not just a curiosity confined to academic circles and high school textbooks — understanding their distributions can inform cryptography, or codebreaking and code solving. At UCI, Florea said that she’ll be continuing collaborations with Mathematics faculty that are already happening, as well as possibly starting new collaborations with UCI faculty who work in number theory. “Towards the beginning of your career, you tend to spend a lot of time thinking about problems by yourself, which can be a lonely experience for some people,” Florea said. “If you’re working alone and get stuck, it can be quite discouraging. But as you start collaborating more, that feeling starts to fade, and the collaboration process can be very enjoyable.”

Manuel “Manny” Reyes started at UCI last month. A mathematician with a Ph.D. from UC Berkeley, Reyes studies algebra, and the ways in which the usual rules of algebra can break down. One area where those rules upend is the quantum world, which, concerned with the behavior of atomic-scale particles, is a realm where typical physical laws no longer seem to be at work. Understanding how algebraic rules change in the quantum world may be one way for scientists to understand “what makes the quantum world so strange,” said Reyes, who added that, despite their complexity, he finds inspiration in tackling big-picture questions like these. “My initial questions are often vague enough that a lot of work is needed to refine them into precise mathematical questions,” said Reyes. “It’s a challenge to constantly rethink a problem at its most fundamental level.”

For applied physicist Howard Lee, the most irksome thing about studying things like optical fibers at nano scales is the unpredictability of what he might find. “It happens often that we are doubtful about our understanding on a science a topic, or whether we are working in the right direction or not,” said Lee, who got his Ph.D. at the Max Planck Institute for the Science of Light in Germany. “But this is also why we love to do science, since we can proof the theory or prediction in the lab as experimentalists.” Lee’s coming to UCI in October of this year, and one thing he and his research team will be studying when he gets here are ultra-thin optical films. Such films are surfaces that are about 1,000 times thinner than the width of a human hair, and they can alter light in different ways, from absorbing almost all of the light that hits them, to filtering out select colors of light. The films may one day lead to the mass production of things like “metalenses” — flat lenses bearing light-altering nano-structures that might replace conventional (and bulkier) curved lenses. Because Lee’s group is at the frontier of its field, he’s expecting to find some unpredictable things. "To be creative, we sometimes need to be a little bit crazy and not pay too much attention to what other people say'," Lee recalled his former Ph.D. advisor, physicist Philip Russel at Max Plank, telling him.

Ian Moult, a theoretical physicist, traverses the space between what’s theoretical and what’s observable. “My primary research interests lie in the development of techniques for connecting quantum field theory with particle physics experiments,” said Moult, who received his Ph.D. in 2016 from MIT. Quantum field theory is an area of science concerned with understanding the physics of elementary particles like protons and electrons, and Moult works to connect abstract ideas in that field to what researchers measure in the real world by creating mathematical descriptions, or “formalisms,” Moult explained. Like many in our School, Moult uses the Large Hadron Collider, which, found at the European Organization for Nuclear Research in France and Switzerland, is a 17-mile-long machine that smashes particles together so scientists can study those particles’ properties. “The most difficult aspect of this type of work is that there can often be a long time between the development of a formalism, and seeing its impact on the understanding of the experiment,” Moult said. “Patience is therefore required, particularly for longer scale projects.”

Stephanie “Steph” Sallum’s an astronomer who came to UCI by way of UC Santa Cruz, where she just finished a postdoctoral position. Sallum started her professorship on July 1, and she’s part of a cluster of astronomers who scan the night sky for planets that exist beyond the orbit of our sun. “We now know of thousands of exoplanets — planets around stars other than our own sun — but we still know remarkably little about how they form and evolve,” said Sallum, who received her Ph.D. from the University of Arizona in 2017. “At UCI, I’ll be using the Keck telescopes to search for and characterize planets around young stars.” The Keck telescopes, run by the University of California and Caltech, sit atop Hawaii’s Mauna Kea volcano, and Sallum’s using them to, among other things, look for young stars that might have planets orbiting them that are still in the process of forming. If she can spot the planets, it’ll help her and other astronomers better understand the rate at which planetary formation happens.

Inti Sodemann, a condensed matter physicist who’ll start his faculty position in the Department of Physics & Astronomy in July of 2021, studies behavior. Not the behavior of animals like giraffes or humans, but the behavior of things like electrons, atoms and photons. Sodemann studies emergent behavior — he wants to discover what phenomena emerge when things like electrons and photons interact with one another. Just as collective behaviors can emerge within a group of organisms, so, too, can emergent behaviors arise from physical systems. “Some of the systems I focus on are called fractionalized states of matter,” Sodemann said. “These are systems made from ordinary elementary quantum particles like electrons, but which can have emergent fractionalized particles which are astonishingly different from the ordinary particles we find in the vacuum of our universe.” The collaborations Sodemann builds at UCI will, he explained, combine theory, experimentation and computation. Within this space, he hopes to unearth new emergent behaviors, because “every now and then, a really beautiful stone is found,” Sodemann said.