The fellows are the faces of the DEI efforts in each of the school’s four departments.
Lucas Van Wyk Joel
UCI Physical Sciences Communications 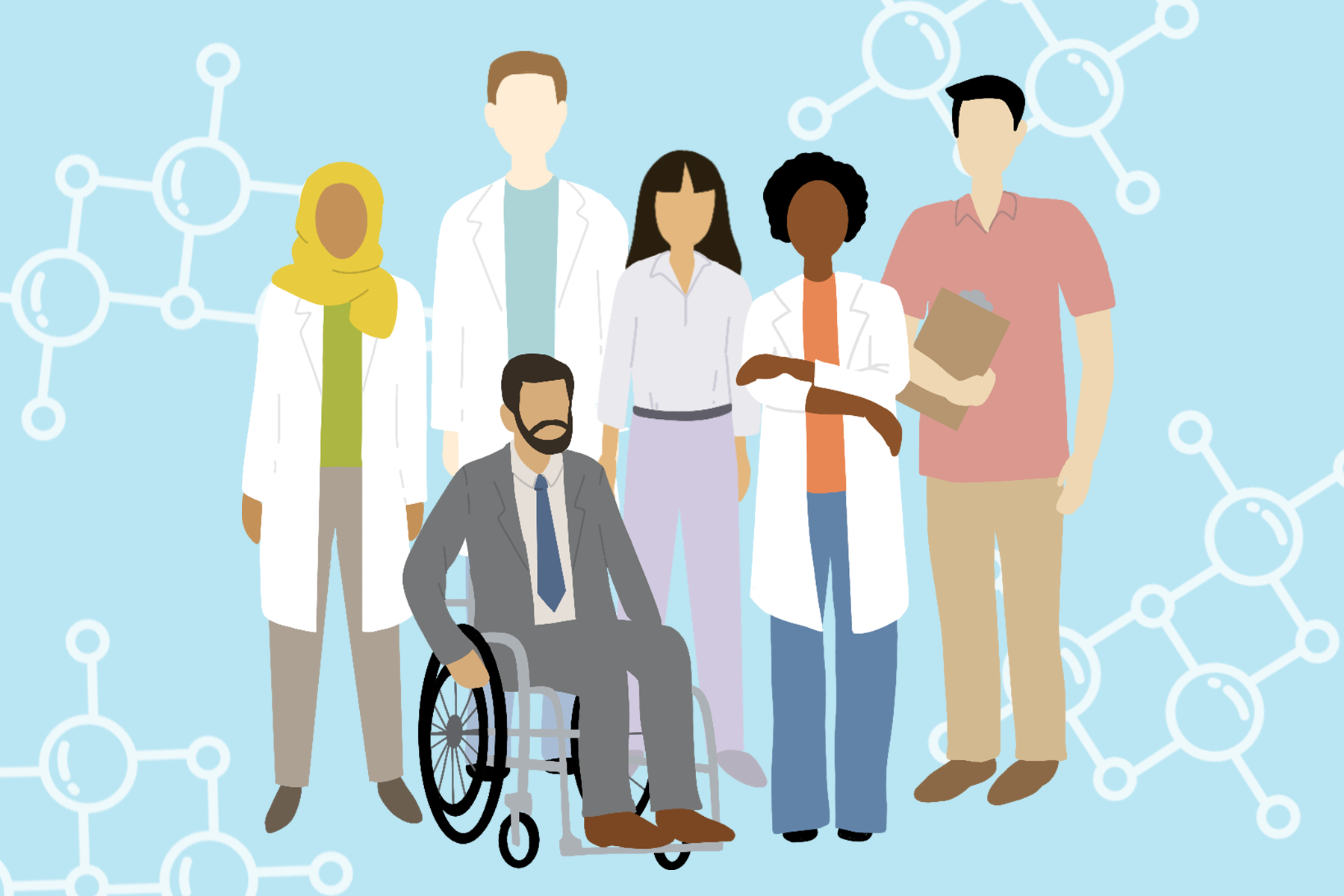 The fellows aim to foster cultures of belonging.

The graduate student Diversity Fellows in the four departments in the UCI School of Physical Sciences are ambassadors of change. Their aim is to create a sense of belonging at our school — something that can be elusive for students who come here from underrepresented groups. They advocate for and lead DEI initiatives in their departments and also collaborate with other diversity fellows, the Physical Sciences Access, Outreach and Inclusion Program Coordinator, Kara Ward, and Associate Dean for Diversity, Equity and Inclusion, Mu-Chun Chen to advance inclusive excellence within the school. They coordinate with the School’s Science Communication Fellows so they can spread the word about their ongoing work, and also with their department DECADE (Diverse Educational Community and Doctoral Experience) representatives, who provide guidance on improving the DEI climate in their departments.

Ada Na’bila is a Ph.D. student in the lab of Professor Benis Egoh in the UCI Department of Earth System Science (ESS). Originally from Cameroon, Na’bila’s research focuses on how human activities, specifically the production of palm oil, impacts things like climate change. As the diversity fellow for her department, “my aim is to celebrate and raise more awareness to the rich life and cultural diversity in the department and the School of Physical Sciences,” she said. To that end, she intends to create safe spaces for Black, Indigenous and People of Color (BIPOC) so they can share experiences and create community in ESS.

Jenny Pi is a Ph.D. student in the UCI Department of Mathematics who works on the application of logical rules in math, and as the math diversity fellow she aims to bolster the educational outreach programs already at work in her department, like MATH CEO. “I’m really passionate about changing the dialogue surrounding math for young and underserved students,” said Pi. “I think seeing math as an unfolding story, and finding the beauty in uncovering meaningful connections, is an important aspect that often doesn’t get included in early math education — or any math education, for that matter.” By introducing play into math learning, Pi hopes to help make the pursuit of math more inclusive.

Manuel Paul is studying astrophysics for his Ph.D., and for his diversity fellow he continued working with the School of Physical Sciences’ UCI LEADS program, which functions as a bridge program that helps UC undergraduates apply for STEM Ph.D. programs. Paul’s also the outreach coordinator and graduate advisor for the UCI astronomy club.

Ph.D. student Stephanie Stawinski hunts for distant galaxies using the University of California’s Keck telescopes in Hawaii and, soon, the just-launched James Webb Space Telescope. In the UCI Department of Physics & Astronomy, she helps lead Physics & Astronomy Community Excellence (PACE)  — a program aimed at providing mentoring support for new graduate students in the department. As a fellow, Stawinski will continue, and improve upon, her PACE work. “PACE helps foster a sense of community in the department and provides students with the tools needed to thrive,” Stawinski said. “What I do for PACE is help train graduate student mentors, prepare and run group sessions, and organize and create workshops.”

Brooke Payne Carpenter grew up in Mississippi, where she studied polymer science and chemistry at the University of Southern Mississippi. She works in the Professor Joe Patterson group in Chemistry, and, as a chemist and a new mother, “I am passionate about spreading awareness on how to safely handle chemicals while pregnant and lactating,” she said. “My overall goal is to reduce stress to birthing persons, and to encourage them that having a family in graduate school is possible.”

Rakia Dhaoui hails from the San Francisco Bay Area, where she grew up and went to UC Berkeley. She graduated in 2019 with a B.S. in chemistry, and now she’s working with UCI’s Professor Joe Patterson as an NSF GRFP fellow studying ways of making industrial practices greener. “My own struggles with feeling a sense of belonging in STEM courses has pushed me to identify ways in which I can help make the scientific community more inclusive,” Dhaoui said. “As a diversity fellow for the chemistry department, I hope to work with the other four fellows to take our communal experiences as graduate students and use our collective insights to push for a more inclusive and equitable environment in our department.” To this end, Dhaoui plans to examine DEI barriers unique to chemistry, and then to develop programs that work to address them.

Alissa Matus is a fourth-year Ph.D. student in the lab of Professor Jenny Yang, where, as an NSF GRFP fellow, she’s researching how to capture Earth-warming carbon dioxide out of the air. As a fellow, “the two major things I want to do for the department are to ensure that students from historically excluded backgrounds have adequate networks of support via peer mentorship, in-lab mentorship, and safe spaces that foster a sense of belonging,” she said. “And to help lay a foundation for the diversity fellowship within our departments so future diversity fellows can have the tools they need to hold faculty members accountable, and uplift their fellow students.”

Wong’s a fourth-year graduate student who’s studying atmospheric chemistry. She grew up in Los Angeles and graduated from UC San Diego in 2018, where she studied environmental chemistry. Now, in the lab of Professor Sergey Nizkorodov, she’s working to understand the role of aerosols in climate change, and as a fellow “I hope to foster a community with a culture of inclusion where students have a network of support and they feel more connected,” she said. “I also aim to increase the faculty’s awareness of the issues and challenges that students face today along with working closely with staff to make resources readily available and accessible to students.”

Also an NSF GRFP fellow, Ali Younis is from south Florida where he earned his bachelor’s degree in chemistry from the University of Central Florida in 2019. At UCI he works in the lab of Professor Andy Borovick, working on proteins that can store clean energy. “As a Black first-generation student, I believe that carving out a more equitable space for underrepresented students in science is just as important as publishing papers,” Younis said. “As a diversity fellow, I hope to get faculty in the department to understand and adopt this sentiment so that future students feel more supported and fulfill their true potential.”