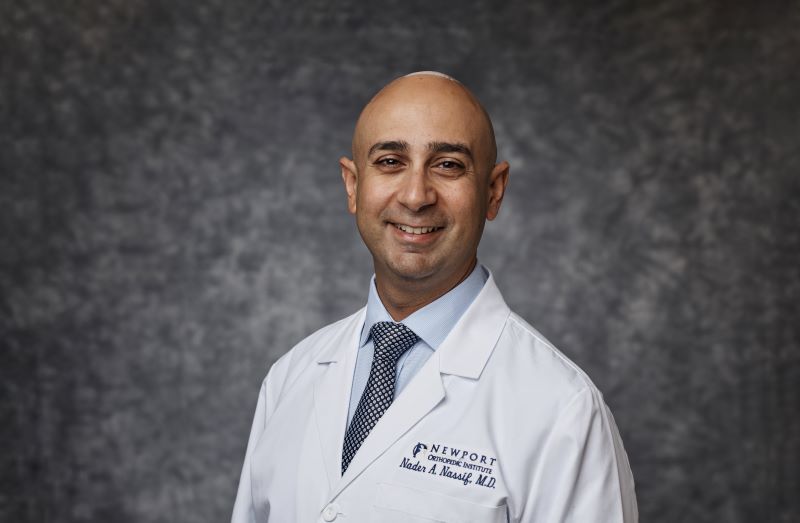 Today, Doctor Nader Nassif works in the operating room, replacing hips and knees — a skill that started taking root in the physics classrooms of UCI professors like Gary Chanan.

Doctor Nader Nassif ‘02 likes to ride his bike. The orthopedic surgeon and Southern Californian lives in Orange County, and he’ll ride his bike around the Upper Newport Bay Nature Preserve in Newport Beach, seaward of UCI. He rode a lot during the pandemic, so much so that it started to become a habit. By Nassif’s own admission, it was during the pandemic — when he wasn’t performing as many surgeries because, for a time, all non-elective surgeries stopped — that he got into the best shape of his life. “I have too much pent-up energy,” he said in the half-hour window that he had for an interview between surgeries at Hoag Orthopedic Institute.

During the pandemic Nassif also got into perhaps the best literary shape of his life. He did a lot of reading, and one of the books he read — or listened to — while riding his bike around the bay is a book called Atomic Habits by James Clear. It’s a book about the tiny things that form the foundations of bigger habits that you want to build. It reminds you that you build a house brick by brick, or that you write a story letter by letter — that you build any habit, good or bad, one atom-sized piece at a time. Riding his bike and listening to the book at the same time, Nassif rode atop one habit while learning how to build others. And in speaking with him and hearing about his life during and after his time at UCI, the picture of a tapestry of habits working their way into who he is today started to take shape.

Take his time as a physics major in the Department of Physics & Astronomy at UCI. It was in that department that he learned about concepts like free body diagrams, material properties, force and torque. Nassif spent long hours in the UCI Science Library learning about these concepts until they became their own ingrained habits — which grew from other habits that seem to’ve been there from the start. “I was just a math and science kid,” Nassif said as he pondered a question about where the pull into physics  started for him.

Today, the habits of forces, vectors and Newton’s laws return to Nassif not in the physics classrooms of professors like Gary Chanan, who Nassif took introductory physics classes from and who Nassif recalls as someone who could turn any physics concept into a story that stuck with you — a story you remembered and which became fertilizer for remembering concepts like free body diagrams — but in the operating room, where today he works as an orthopedic surgeon, replacing hips and knees. He’s applying fundamental physics principles in real life. “Joint reconstruction and replacement boils down to putting my physics classes into practice,” Nassif said. “When performing a joint replacement surgery, I am constantly trying to balance forces, optimize positioning to minimize stresses on the bone in order to provide a superior clinical outcome.”

Nassif went to Harvard Medical School, and he thinks he got into that school thanks to yet another habit that he started at UCI. Not only was he spending hours in the Science Library learning the tools of his trade, he was also applying them by becoming involved as an undergraduate research assistant at the Beckman Laser Institute. Such involvement in research was still a relatively rare thing for an undergraduate to do back in the early 2000s, and Nassif credits that early involvement with helping open the door to medical school.

Not all habits arise by design; some arise unexpectedly. For Nassif one such unexpected habit — patience — arose when he started teaching Orthopedic Surgery fellows at Hoag. “It just takes them longer to do things that you’ve done thousands of times,” he said. But his patience has paid off, because Hoag is also involved in clinical research, and by taking the time to train his fellows Nassif is able to do research that focuses on clinical outcomes and value-based care. One such project involves optimization of post-operative protocols in hip and knee replacement surgery to allow patients to go home on the same day of their procedure.

And it’s all a tapestry of evolving habits, one that sees Nassif getting up around 5:30 a.m. each morning, exercising or helping his wife get their kids ready for school, and then going to the operating room where he works until around 3 p.m. or so in the afternoon, followed by meetings — and the occasional interview with a writer — and then going home where he spends time with his kids, hearing about the habits they’re busy picking up at school.

As time at home lessens, Nassif, who was just elected to the Physical Sciences Hall of Fame, isn’t reading as many books as he did during the pandemic. But like a bike that you already know how to ride, the books he read and the things he learned from them will help him build whatever atomic habits he wants to build next.