Valentine’s candy stores at the bottom of the ocean 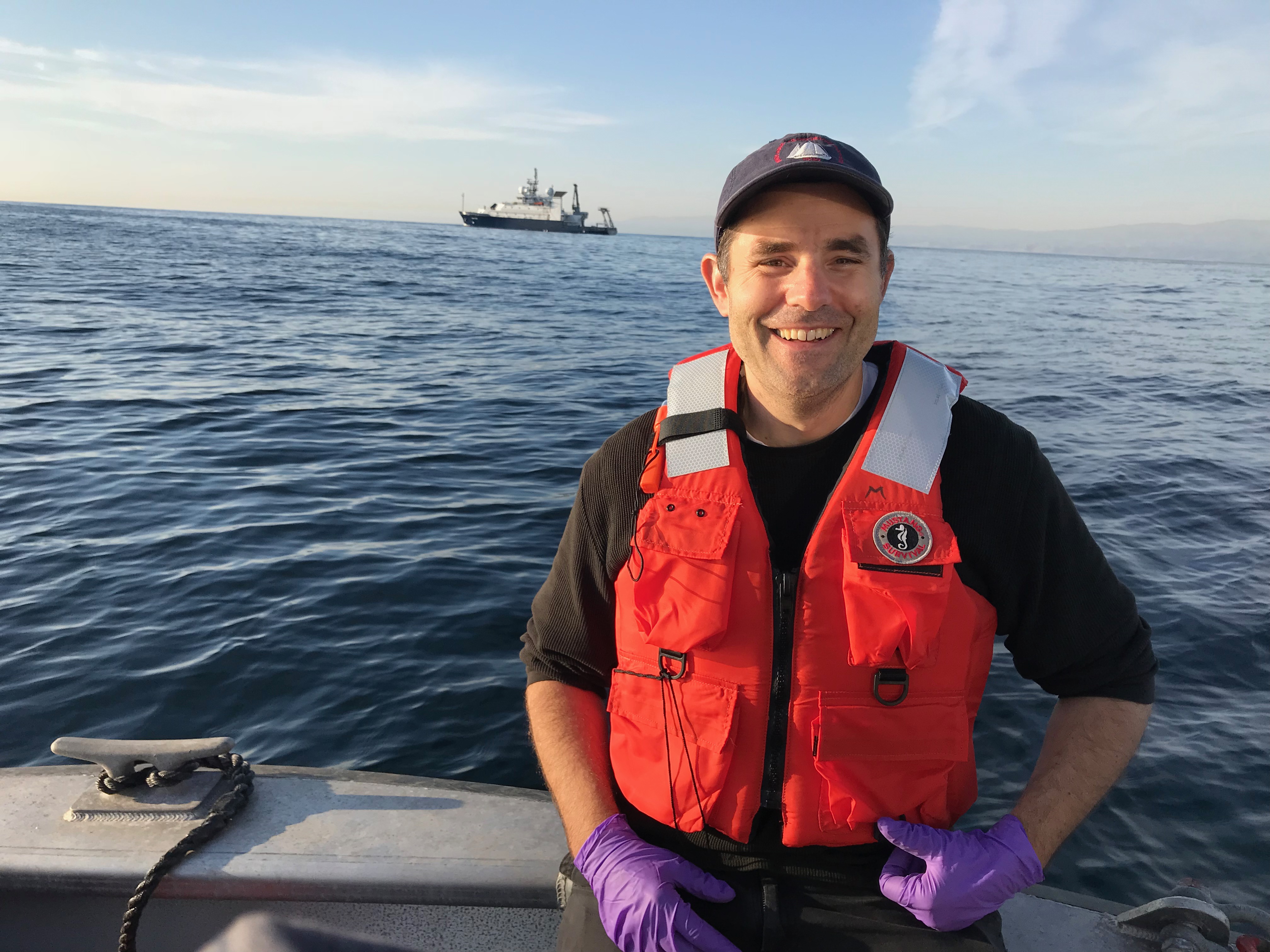 Professor Dave Valentine at UC Santa Barbara started exploring the ocean for his research alongside his former advisor at UC Irvine, the late Professor Bill Reeburgh.

And like that I was the only one left in the Zoom room. Not many people get urgent calls from “submarine people,” and when I heard those two words — “submarine people” — they conjured in me visions of a kind of lost tribe of people who only live on submarines, and I thought that calls from them must be quite special.

But the people who called only live on submarines some of the time; the people are scientists, and the person who needed to take the call from them at the end of my interview with him was Dave Valentine, a curly-haired marine microbiologist who, when we spoke, sported a black t-shirt with a stylized U.S. flag printed on it, and who had behind him a stuffed bookshelf that held three books he wrote with his microbiologist father. Valentine holds the Norris endowed professorship at UC Santa Barbara, but long before he was a professor he was one of the first graduate students to earn their Ph.D. from the UC Irvine Department of Earth System Science (ESS). He applied to ESS in 1996 just one year after that department formed as the first department in the world dedicated to studying how Earth processes — including climate change — can evolve on human timescales.

The submarine people are important, and they’re worth leaving a Zoom call for because they’re the ones who can get Valentine to the places on the planet where, he told me with a boyish grin, “I’m like a kid in a candy store.”

Valentine’s candy stores, though, don’t sound very sweet. They’re just mounds of goo on the seafloor — mounds shaped like any hill you might see here on land, and “stinky like rotten eggs,” Valentine said. But for the kind of person who gets calls from submarine people — for someone like Valentine — the mounds, which can be 60 feet high and hundreds of feet wide, are candy stores if candy stores are the kinds of places that, after you visit them and indulge in their tasty delights, reveal to you long-kept secrets about life itself. They’re candy stores where the line between life and geology is thin, because what makes the mounds is life. Microbial organisms deep beneath the sea floor produce methane gas that travels along oceanic faults and solidifies, causing the seafloor in the area to bulge. Simultaneously, other microbial organisms eat that methane and, over the centuries, they produce mineral crusts that coat the growing mounds, creating what Valentine himself coined to be “microbial terranes.”

Microbes that live on the seafloor can persist for millions of years and not die, and so basic questions about how the mound microbes live are the kinds of mystery candies that Valentine wants to sample. “What’s life and death like for these organisms?” Valentine posed. “Their biology has been really challenging because no one can culture them in the lab."

One challenge with having candy stores that’re underwater is that, well, they’re underwater. Many of the mounds are over 3,000 feet below the surface of the water, and pressures at that depth are about 100 times the amount of atmospheric pressure at sea level, and so getting samples Valentine and his lab can study can, and do, like this one time in his lab, make for gooey messes.

The fuse leading to one of those messes stretches back to Valentine’s time at UCI, where he studied because his then-advisor, Professor Bill Reeburgh, who just passed away in July, recruited him with the promise of studying methane gas. Valentine aimed to do work that stood to help inform environmental policy, and working on methane — one of the top three greenhouse gases alongside carbon dioxide and nitrous oxide — fit that bill.

Croul Hall on campus now houses ESS, but Valentine was at UCI long before that building existed. Reeburgh was there, of course — and so was Jorg Meyer, the glassblower for the UCI Department of Chemistry, who also passed away this year back in May.

Reeburgh and Meyer are gone, but their memories live on in the stories and work of people like Valentine. Back then Meyer would go to Valentine with questions. The questions weren’t for Valentine himself — they were for Valentine’s wife, who at the time was in medical school, and Meyer knew it. Valentine made me promise not to repeat the two words Meyer used — Meyer used them to describe a medical issue involving a motorboat — but when Valentine said them I laughed hard and came to know Meyer and the mythology surrounding Physical Sciences a bit more.

Valentine and Myer had a rapport because it was Meyer who made the glassware Valentine used to run his methane experiments. Those experiments built off the work of Reeburgh, who, among many other things, discovered that microbes could digest methane without the presence of oxygen — which was once thought to be an essential ingredient in microbial metabolic processes.

One night Valentine did an experiment in the High Bay Physics Building, which once housed the entire ESS Department. The experiment took weeks to set up, and Valentine hoped it would give him data that would make its way into his doctoral thesis — but there was a power outage. At the time, Meyer’s glassblowing shop was right across Ring Road in Rowland Hall, and that night — close to midnight — Valentine snaked a 300-foot extension cord from Reeburgh’s lab across the road, broke into Meyer’s shop, and plugged in the cord and restored power to his lab and his experiment. “Jorg was not happy,” Valentine said. “But we had to.”

They had to because Valentine’s research was already orbiting around the sweet secrets the deep-sea microbes he still studies can hold. In his research, “we’re trying to understand the rates at which processes happen in those environments,” Valentine said. “And leveraging those insights to expand our understanding of how life functions at the extremes.”

One such extreme: living 3,000 feet under the ocean.

Which can lead to another extreme: gooey messes.

Valentine remembers walking into his lab at UCSB, and one of his grad students turned to him and said “don’t look up, we shat the ceiling.” Valentine looked up, “and it’s like high velocity blood splatter at a crime scene — just mud-splattered,” he said; like a firehose the mound sample shot out of its canister with the errant turn of a valve and deposited itself all over the the ceiling.

It was a gooey, rotten mess, but lurking withing the mound-turned-stalactite oozing on Valentine’s lab ceiling was a discovery waiting to happen; “We discovered a new virus, one that infects methane-eating microbes,” Valentine said.

The microbes in question are part of a branch of life called the Archaea. It’s a branch that includes microbes that can live in some of the most hostile conditions on Earth, from boiling hot springs in places like Yellowstone National Park to supersaline brines like those in Southern California’s Salton Sea. The Archaea are particularly good at evolving traits that enable them to survive the extremes.

Valentine’s deep-sea research makes headlines and you may have inadvertently seen or heard him in any of the 500 or so interviews he has given in the past decade. In 2020, outlets like the LA Times, CBS and PBS covered he and his lab’s submarine people-enabled dives to uncover what could be one of the most polluting toxic dump sites off the coastline of Southern California. While the importance of the dump site is clear, what they found in the new virus they discovered is a much sweeter discovery — at least for Valentine.

It’s a virus called ANMV-1 (for ANaerobic Methane Virus - 1) that can do something that no other known archaeal virus can do, and which may be a major cause of mortality for the terrain-forming microbes. The virus infects methane oxidizing microbes, and when it encounters a strong anti-viral defense, it can edit its own DNA with the precision of a surgeon and give itself the ability to bypass defenses the microbes have. It “allows the virus to rewrite its genetic code but target it to specific regions — it’s an offensive countermeasure against host defense,” said Valentine. It’s a discovery Valentine and his lab reported on in a Nature Communications paper, and it’s a find that inspired him and his lab to look at the genetic code of the microbes themselves, where they discovered that many lineages of ultra-small microbes have the exact same ability as the virus.

Discovering a gene-editing trait like this is the equivalent of a human having the ability to change its eye color from blue to, well, whatever it needs and wants. It’s the latest in a list of traits in the Archaea that would impress any science fiction writer, and it’s something that opens the door to new delectable questions, like how it is the microbes acquired the same trait as the virus that attacks them and how ecological pressures within a microbial terrain drive only select genes to be edited. These new questions alone make Valentine’s candy stores at the bottom of the ocean worth a return visit alongside the submarine people.