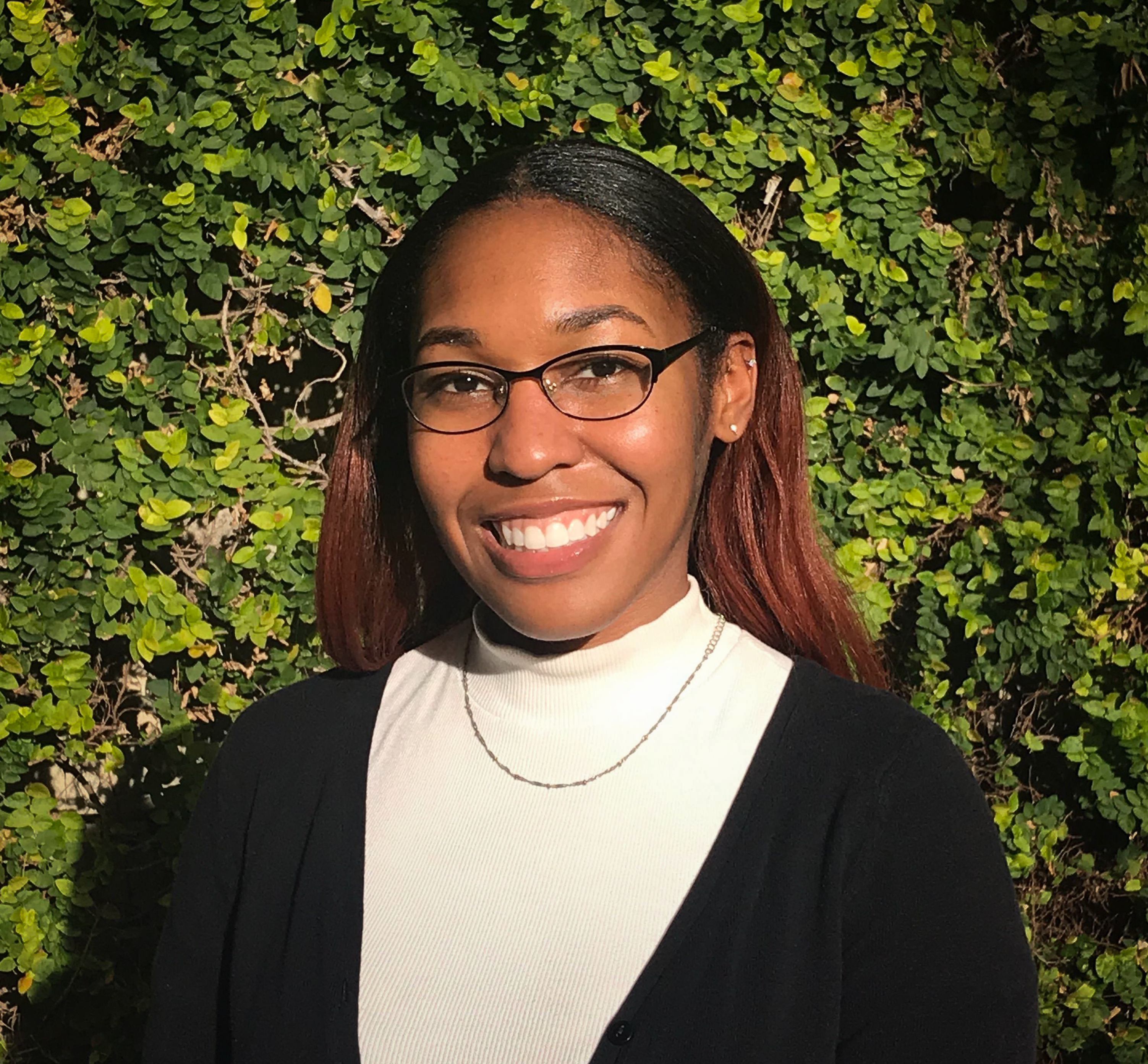 Sierra Williams followed the glowing fireflies of her childhood streets into science and into the lab of Professor Jenn Prescher at UCI.

In a freezer in a chemistry lab on the third floor of Natural Sciences 1 at UC Irvine, there rest things that used to be alive, and which, when they were alive, not only lived, but glowed.

The things are fireflies.

No fireflies live out here in the West, but if you trek east, by the time you reach the forests of Kentucky fireflies twinkle in the night and make you think you’re in a stadium all aglitter with the flashes of cameras. Fireflies keep up the show until you reach the eastern seaboard, including in Capitol Heights, Maryland, which is where Sierra Williams, a Ph.D. student in Professor Jennifer Prescher’s lab in the UC Irvine Department of Chemistry, grew up.

Williams remembers the fireflies on her streets.

“I just love things that glow,” said Williams, who herself shone brighter and dimmer as she sat in the oscillating sunlight and shade outside Natural Sciences 1, where she recounted the story of her doctoral career. Williams is a fifth-year who’s graduating this summer, and who in August will start a chemistry professorship at the Claremont Colleges in Claremont, California, just up the highway.

Nature’s bedecked with organisms that glow, or luminesce, from fireflies to certain species of mushrooms and fishes and shrimp. There’re even marine bacteria that glow and which can make the surf at the beach glow greens and blues. Williams knew early on that she wanted to follow her love of bioluminescence into science — but the path ahead was, when she was an undergraduate, ironically dark. Coming from an underrepresented background, Williams didn’t think chemistry was a path someone like her could take, and when she started school as an undergraduate at State University of New York College of Environmental Science and Forestry in Syracuse, New York, she started out majoring in environmental science because it somehow seemed more appropriate. But after transferring to Temple University in Philadelphia and joining the lab of Professor Bill Wuest — now at Emory University — who introduced her to research in organic chemistry and helped her apply to graduate schools, Williams’ path illuminated before her.

And now, you don’t have to trek east to find firefly light, because Williams and Prescher are synthesizing the lightning bugs’ glow in their lab.

The part of a firefly that glows is the abdomen. It glows thanks to a reaction involving an enzyme and another chemical, and Williams’ research orbits around making synthetic versions of both components so that they can, when introduced into animal cells, glow as they do in fireflies. It’s almost like learning how to bottle light itself, and then uncorking the bottle in a cell.

Scientists using highly sensitive cameras can then track the light emitting from within a cell, almost as though the cells are reporters broadcasting news of their whereabouts and goings-on. For a disease like cancer, where cells divide in out-of-control ways as they spread throughout a body, the ability to chart the cells' path in a way that doesn’t require traumatic procedures can be a boon for patients and the doctors alike. “It’s a non-invasive way to monitor cell processes,” Williams said.

One limitation to the work is that, until recently, researchers were only able to spy on one kind of cell at a time, which casts light on how just one biological process is working, but leaves others that might be related to that process in the dark. In a paper published in 2019 in Accounts of Chemical Research, Williams and Prescher discuss a kind of lock-and-key technique that involves making unique chemicals that match with unique, genetically engineered enzymes in cells. The work promises to help researchers tell the difference between different glowing cells based on specific cells’ characteristic locks and keys.

Williams also works to pass on the glow that Wuest helped her find at Temple. When she started at UCI, she become a mentor for undergraduates through DECADE PLUS on campus, and she’s guided students working in Prescher's lab over the last few years. Listening to Williams remember her mentoring work, it sounded like more than one key found its lock, and it’s her mentoring work that moved her to accept a professorship at the Claremont Colleges where, come August, she’ll continue working closely with undergraduates. “The thing I love the most is seeing how much they’ve grown,” she said.