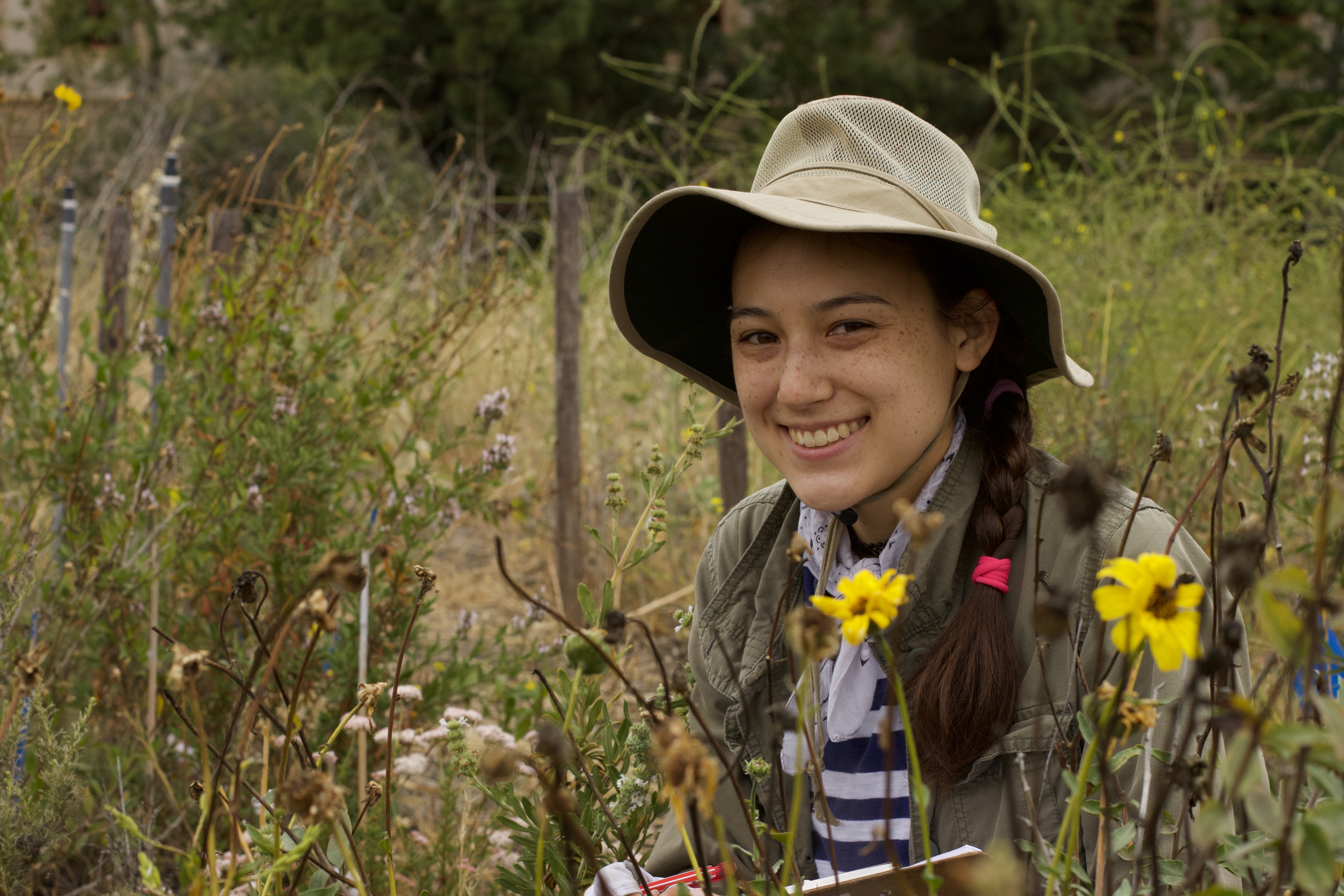 This time of year, it’s impossible not to notice the yellow. It comes from the flowers of the invasive black mustard plant, and at UCI, if you’re traveling on East Peltason toward the School of Physical Sciences, you’ll see the black mustard in full bloom on the road’s shoulder. It’s all just a blur of yellow if you’re driving, and if you stop and smell the flowers, you’ll see that the flowers sit on tall stems, and that there doesn’t seem to be anything else growing around those stems.

For a junior field tech like Kylie McGuire, who just graduated from UCI with her B.S. in Earth System Science, the flowers are more than a paintbrush stroke coloring our view of the world. They’re players in a drama that started hundreds of years ago when colonists brought the first mustard seeds with them to the West, and the plant started subjugating native California plants, pushing them to the edge of non-existence.

At UCI, the natives exist on a literal edge: at the edge of the UCI Ecological Preserve off East Peltason. The preserve has the familiar yellow blur, and it’s at the edge of the blur that you’ll find a managed plot of land filled with native plants. McGuire helped build the plot when she was an intern at the Center for Environmental Biology. The plot’s part of UCI’s DroughtNet program, and the plot has awnings built in such a way that some parts of the plot receive more or less precipitation than others; it’s an effort to simulate how drought-tolerant the plants are as climate change makes rain patterns more chaotic.

I found McGuire in that plot, which felt like a sanctuary, or a kind of museum of natural history where you go and stand and muse at a diorama that shows what life was like in the not-so-far-away past, like the first-but-still-faint burst of an echo.

These plants are survivors.

It was a Tuesday, and the sky was grey and McGuire, through a face mask she made with her sewing machine using fabric bespeckled with ladybugs, recited for me the dramatis personae — or the dramatis plantae — of the plants in residence there.

There’s California sage brush, which McGuire told me isn’t true sage, but which has the name because when you pinch some off and smell it, it smells like the sage you might find in a spice rack. There’s California bush sunflower, whose stems stand proud and tipped with small sunflowers bursting horizontally with yellow petals around a dark brown pupil. There’s black sage, which is a true sage, and it’s the kind you’d use in cooking.

Also rooted here is a question, one that grows in the metaphorical soil made by the invasion of mustard: can these refugee plants, pushed to the edge by relentless selective pressure from the mustard, come back?

Though not visible or tangible here like the sage or the mustard, it’s the question that guides McGuire’s work. On that Tuesday she was busy counting the flowers on plants like California buckwheat, because, she explained, counting flowers can give researchers a sense for how reproductively successful the plants are in the plot, and, in that way, see if an answer to the question guiding the work is also taking root.

“That sort of thing is what I love most about this work,” McGuire said. “We’re learning and doing new science, and we’re restoring the ecosystem.”

McGuire, when she’s not at the reserve, cultivates something else: stories. She’s taking science writing classes through UC San Diego Extension, and she’s a regular at UCI Physical Sciences’ Story Hour, which gives people a chance to perform their science communication work for an audience. McGuire, who’ll soon start a position as a summer researcher at UC San Diego’s Center for Aerosol Impacts on Chemistry of the Environment studying the role aerosols play in climate change, wrote about her fieldwork:

“I think at the end of the day, something about it just sits well with you and makes you feel good. Well, something about the call of the gnatcatchers, the aroma of the Artemisia, and the squish of the soil under my feet never fail to give me a much-needed serotonin boost.”

In her prose, McGuire described a study she and her team did that they plan to publish that takes a look at whether sowing coastal sage scrub shrub seeds is a better way to help establish the plant than actually planting seedlings in the ground. They’re still analyzing their data, but they suspect that sowing seeds could be the more effective method, as it’s both less expensive and labor intensive than cultivating seedlings.

The inspiration for the method work has its roots in experience. “Let me just say this,” wrote McGuire. “Take a walk through a naturally vegetated park or open space. Listen to the birds. Stop and smell the sage. To me, those experiences are some of the most valuable things that we gain in doing ecological restoration. And I hope that you can take the time and find the value in them, too.”