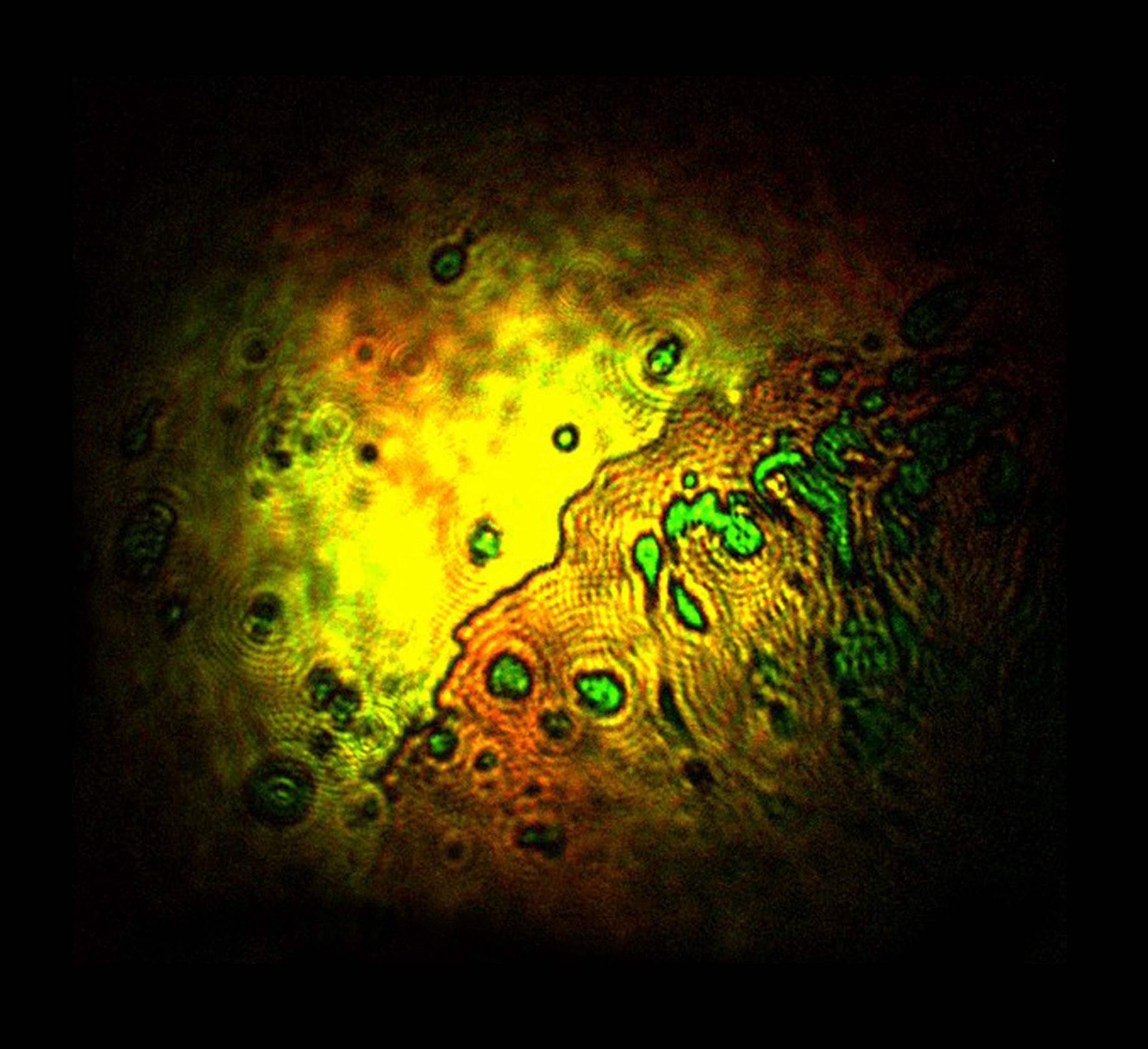 This high-definition infrared spectral image of a composite polymer was displayed on the cover of Sciences Advances, along with a paper by UCI researchers on a new materials visualization technology. Measured in under a second, the different colors correspond to different chemical compounds. Spectral imaging is an indispensable tool for the chemical and medical fields. Dave Knez, a UCI Ph.D. candidate in chemistry, introduced an imaging technique that enables high-speed visualizations of the molecular composition of different materials.

Irvine, Calif., Jan. 4, 2023 – A new visualization technology that captures spectral images of materials in the mid-infrared part of the electromagnetic spectrum has been developed by scientists at the University of California, Irvine.

The discovery, which was recently featured on the cover of the journal Science Advances, promises to help researchers and industries across many fields, including medical and tech, quickly visualize the chemical composition of various materials or tissues.

“Mid-IR light is associated with chemical bonds,” said Dave Knez, a Ph.D. candidate in the UCI Department of Chemistry and the lead author of the journal paper. “With this technology, we can more confidently say there's a particular chemical, or a given chemical bond, in a sample.”

The key to developing the method was being able to quickly capture and differentiate the infrared wavelengths needed to compose images. It’s similar to how smartphone cameras record different colors – and thus different wavelengths – in the visible light spectrum to create photographs, said Dmitry Fishman, director of the Laser Spectroscopy Labs and an associate adjunct chemistry professor at UCI.

Chemical bonds, Fishman explained, only vibrate and absorb light in the infrared part of the spectrum. Until now, it hasn’t been easy to produce an image with good definition. The new technology “sees ‘colors’ in infrared,” he said. “And colors reveal spectroscopic lines, which, in turn, provide a chemical ‘fingerprint.’”

That makes it much easier to accurately assess “the composition of materials that you’re looking at, including human tissues,” said Eric Potma, a UCI chemistry professor and a co-author of the paper.

In the medical field, the most likely applications will be in analyzing tissues afflicted by disease, Potma said, explaining that the method can dramatically speed up and improve such tests.

The technology can also detect changes in chemical composition over time –which would be helpful when tracking chemical reactions and processes.

The work is the next stage in research that the same team reported recently in the journals Nature’s Light: Science and Applications and Optica. Their first prototype, though, wasn’t able to capture the full mid-IR spectrum. Rather, it could only deliver individual image frames of a particular color.

The new development enabled the team to rapidly capture images in which each pixel of the video frame also contains full spectral information.

“It’s the difference between a black-and-white television and a color TV,” said Potma, who noted that’s one reason the previous technology wasn’t ready for deployment in industries like medicine.

Now, Knez and his team hope to devise practical uses for their discovery. “We have plans to employ this technology for solving real problems, from visualization of fundamental chemical processes to cancer research, histopathology, tissue dynamics and a vast number of industry applications – everywhere the ability to see chemistry in real time is critical.”