The UCI story behind a top carbon capture company 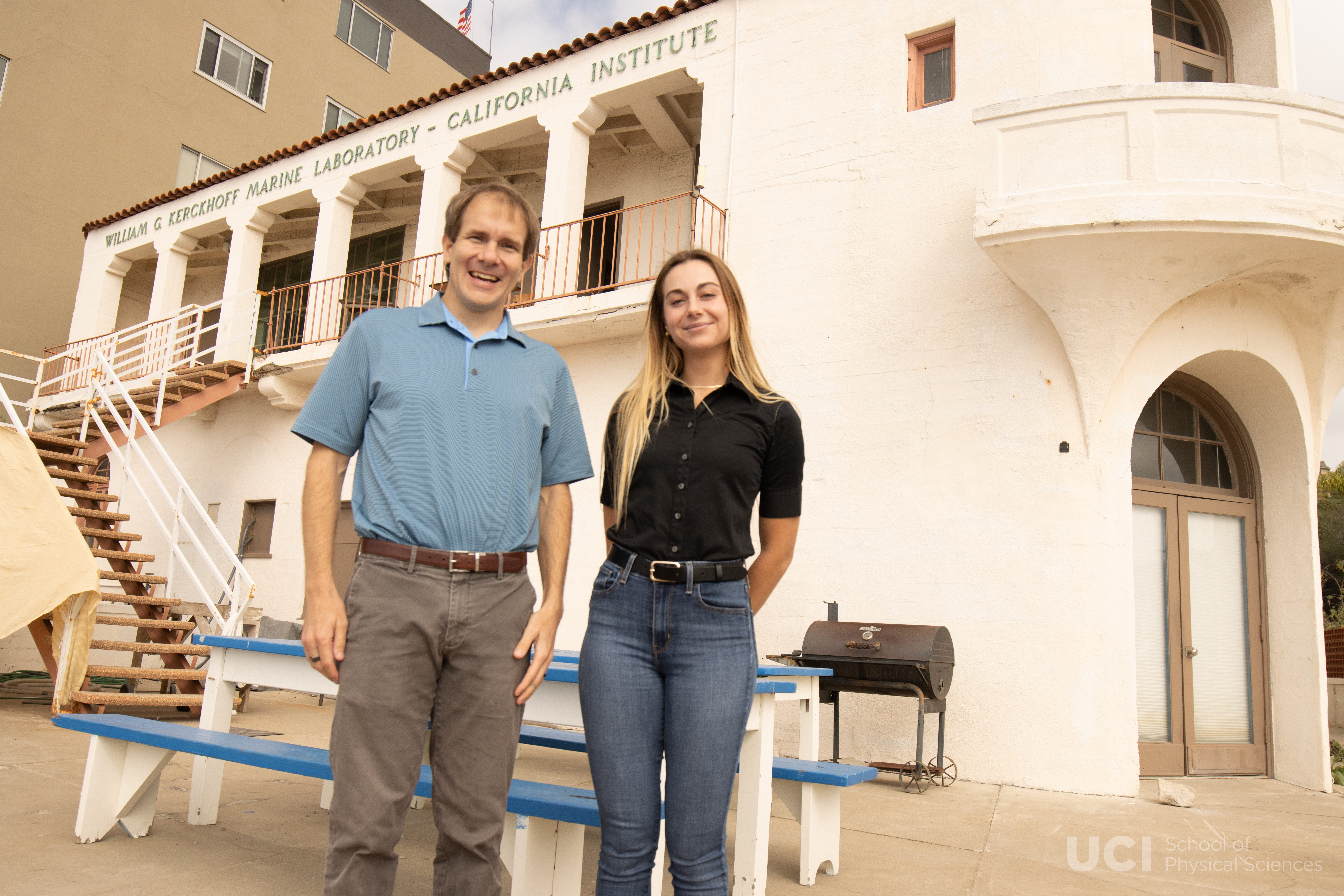 Top: A concept illustration showing a carbon sequestration platform in the open ocean.

Professor Shane Ardo of the UC Irvine Department of Chemistry did his postdoctoral research at Caltech back in the early 2010s, and he recalls spending many late nights back then in basement labs alongside fellow postdoc and UCI Physics & Astronomy Ph.D. alumnus Chengxiang “CX” Xiang.

The two anteaters would tinker with experiments involving the chemistry of things like artificial photosynthesis and hydrogen fuel.

Neither knew it back then, but those nights were the start of a decades-spanning collaboration that led to their involvement in a company called Captura – a startup that aims to sequester planet-warming carbon dioxide from ocean water at a scale of around 10 gigatons of CO2 each year. Currently, Ardo serves as a scientific advisor for Captura, which Xiang founded in 2021 with fellow Caltech professor Harry Atwater.

Captura’s vision seems like science fiction: Xiang worked with an artist to create an illustration that shows a giant machine-laden platform floating in the open ocean encased inside a transparent glass dome.

“I’m pretty happy with that illustration,” said Xiang. “It’s actually quite realistic in the way that it captures the many important features of carbon capture plants at large scale.”

In the illustration, machinery takes ocean water in from one side, processes it, captures pure CO2 out from the water and then puts the ocean water back with no byproducts.

As for the captured CO2, the plan is to store it deep under the ocean floor in depleted oil reservoirs or to create new uses for it. A large part of Captura’s mission involves fostering an emerging carbon economy wherein carbon dioxide removed from the climate system acquires new life by becoming an ingredient in consumer products like concrete.

It’s a simple concept, but it’s in the details that Ardo's lab is working on that stand to define the future of Captura, including research that Ardo and one of his graduate students, Anastasiya Bender, are actively doing.

You can find a prototype of the company’s sequestration machine a short distance from UCI at Caltech’s Kerkhoff Marine Laboratory (KML) in Corona Del Mar. KML looks out over the ocean, and it has a pier with pipes running along it that snake from the ocean up into the lab. The pipes run through a hallway to a small room where there are whirring pipes and motors that are busy processing ocean water and capturing its CO2. The prototype removes about six pounds of CO2 from the climate system in a day and about one ton of CO2 in a year.

But the hurdle facing Captura is to grow the company’s operations to a scale that can actually make a dent in atmospheric CO2 concentrations.

“One of the challenges and opportunities is to really try to scale as quickly as you can,” said Xiang. “You’re not going to make a difference if you’re doing tens or 100s or even 1,000s of tons of CO2 per year. You really need to get to millions of tons of CO2 per year for each plant, and then deploy multiple plants to make an impact. Billions of tons per year of CO2 will be required in the next few decades based on a lot of scientific consensus.”

For context, Xiang added, the average American emits about 15 or 16 tons of carbon dioxide per year.

And then there are the operating costs. Captura sequesters CO2 out of the ocean using electricity – a resource that may not be much of an issue at the relatively small scale of the KML system, but which, at a scale of 10 gigatons of CO2 a year, could significantly impact operating expenses.

“How cheap can you get CO2 from the atmosphere or ocean?” asked Shannon Boettcher, a chemist at the University of Oregon who isn’t involved in Captura. “Current technology requires too much energy, and innovation is needed for this type of technology to work at scale.”

That’s where the Ardo lab comes in.

“The efficiency of the reactions will ultimately dictate electricity needs and overall CO2 cost,” said Ardo, whose carbon capture research is supported by a Department of Energy (DOE) Advanced Research Projects Agency-Energy (ARPA-E) grant he received in 2021.

Nowadays, instead of tinkering in a basement, you can find Ardo in his fifth-floor lab in UCI’s Interdisciplinary Science and Engineering building. There, he and Bender are working to make the chemical reactions involved in ocean water carbon sequestration systems like Captura’s more efficient.

Bender, like her advisor before her, spends her days and nights testing a range of different materials that, she explained, can remove CO2 without needing to lower the acidity of incoming ocean water. Lowering ocean acidity is a key – albeit electricity-intensive – step that Captura’s current machinery does to remove CO2, and Bender and Ardo found that altering the salt content of the synthetic seawater that she cycles through her experimental setup can influence the efficiency of CO2 capture.

“We get a lot of results. We definitely see a lot of failures, but we use them to inform new ideas and experiments that ultimately guide our efforts,” said Bender.

It’s work that could one day help a company like Captura cut its energy costs – and, ideally, soon. According to the the Intergovernmental Panel on Climate Change (IPCC), in order for the world to avoid the worst impacts of human-driven climate change humanity needs to not only curb its emissions, it also needs to develop technology like Captura’s to help stave off the worst impacts of climate change.

“We don’t have a lot of time, right?” Ardo said. “That’s what we’re told, so we need to work fast and innovate quickly, and even fail quickly so we can identify successes.”

“The collaborative work with Shane’s team on catalyzing the CO2 removal from oceanwater with new materials and new concepts is very important to address the energy use of the technology,” said Xiang. “We brainstorm and work on a lot of wild ideas that can potentially bring us to a new cost curve and significantly reduce the cost of carbon removal.”

Xiang was a graduate student in the lab of UCI Chemistry’s Professor Reg Penner. He received his doctorate in 2009, and, using the tools of electrochemistry, he focused his research on developming nanomaterials. Xiang’s research has since evolved in different directions, but you can find the same fundamental electrochemical concepts he mastered at UCI – where he was one of the first student’s in the Chemical, Applied and Materials Physics (ChAMP) graduate program – at work in the reactions fueling Captura.

Xiang said that in a more ideal world, where the IPCC did not cite the need for carbon capture in the struggle against human-driven climate change, he might’ve founded a company more in line with what he and Ardo experimented with all those years ago at Caltech: hydrogen fuel.

“Hydrogen is another thing that I’m very passionate about,” Xiang said. “I think hydrogen will play a very big role in decarbonizing the entire economy. My team at Caltech is working on some really interesting hydrogen projects with DOE.”

Ardo’s also jumping on the hydrogen-fueled bandwagon. Earlier this year, he received a roughly $10 million grant from the Department of Energy to fund the Ensembles of Photosynthetic Nanoreactors Center – a DOE Energy Frontier Research Center at UCI that aims to perform fundamental research into nanomaterials that could in turn help make hydrogen a mainstream fuel in the U.S.

“Be it removing carbon dioxide from the climate system or making the fuels of the future the fuels of today,” Ardo said, “it seems to all stems from the same place: an excitement to try new things, which was there in the air in the Caltech basement lab all those years ago.”