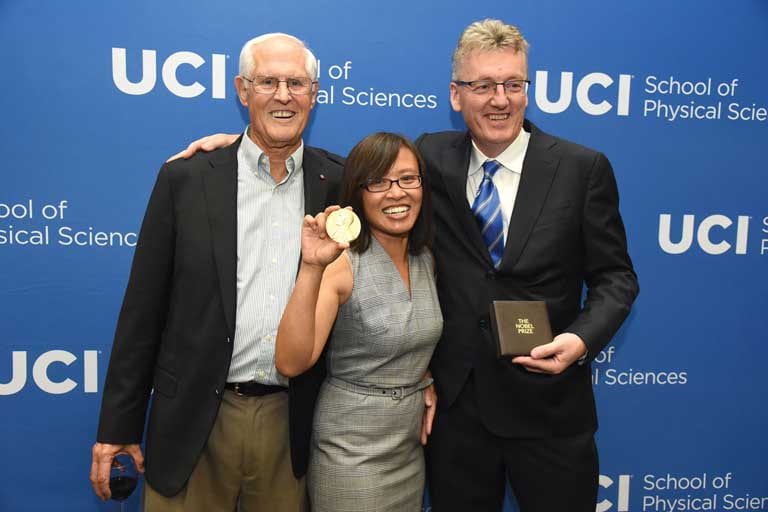 Nobel laureate David MacMillan, Ph.D. ’96, (right) visits UCI in May, enabling a reunion with his Ph.D. advisor Larry Overman, UCI Distinguished Professor emeritus, and Vy Dong, UCI professor of chemistry, who was advised by MacMillan at UC Berkeley and the California Institute of Technology.

In late autumn of 1976, my older brother, Iain MacMillan, did something quite remarkable. He applied to, and was accepted into, Strathclyde University. While most Americans might not think this unusual for a young, working-class boy from a steelworking town in Scotland, this was like landing the first man on the moon. It was news! And it was also controversial. Many in my family thought he was just trying to avoid having to do an honest day’s work (which, in retrospect, could be true).

However, when he graduated four years later with an honors degree in physics, he found a job that paid more than my father, Billy, a steelworker who’d never missed a day of work in 30 years, had ever earned. Right there, right then, my fate was sealed. “Look, son,” my father told me, “you’re going to the uni.”

Fast-forward 13 years to the spring of 1989, when I was in the second-to-last semester of my own B.S. in chemistry at the University of Glasgow and loving every minute of it. I was learning about my favorite topic in the world, organic chemistry; but more importantly, I was part of an amazing class of students from all backgrounds and all walks of life. My undergraduate education in science and society could not have been better. But what next?

Like my brother before me, I wanted to do something different. Given my love of the NFL, American TV shows and all the amazing U.S. indie bands, I thought, “How about a Ph.D. in America? That sounds cool!” And to this day, this completely whimsical notion remains the most foundational idea of my life.

“UCI would change, shape and amplify my life in so many measurable and immeasurable ways.”

Back in the late ’80s in the U.K., to apply for graduate school, you simply wrote directly to a professor you were interested in working with. Being wide-eyed and generally clueless, I assumed that the same must be true for the U.S. So I saved what money I had for airmail stamps and wrote to 19 different professors at 19 different schools. Four months later, I received exactly one reply. It was from Professor Hal Moore at UCI, a truly brilliant chemist and a wonderful, generous and deadpan-funny guy. He sent me a handwritten letter that effectively said, “You are a moron. You can’t just send a letter to apply for graduate school in the States. Here is an application – use it!” A few months later, I was accepted to UCI and on my way to the United States of America.

I don’t think I can describe what it was like to leave a small steelworking town in Scotland on a Tuesday and arrive in sunny Southern California on a Wednesday. To say it was a culture shock might be the understatement of understatements. I remember feeling completely dehydrated for about two weeks as I dried out from my first 21 years of life in Scotland! But it was also an exceptionally exciting, truly mesmerizing experience.

Over the next five years, UCI would change, shape and amplify my life in so many measurable and immeasurable ways. Without question, the most important moment was when I joined the lab of Professor Larry E. Overman. Larry is one of the world’s greatest authorities in organic chemistry. At the same time, he’s just an exceptional educator: a deeply caring individual who works intensely to elevate all his lab cohort, regardless of their innate talent or intellect. More generally, he’s an all-around great Midwestern guy and exactly the right mentor for a “rough around the edges” student like yours truly.

Of course, the academic standards in Larry’s lab were remarkable. It was my first real taste of how exacting scientific research had to be. In Larry’s group, the overarching goal was to attempt to build almost any molecule that exists in nature, despite its complexity, by dreaming up new and hopefully valuable chemical  reactions. The task itself can take many years, but really beneficial outcomes often spring forth, such as: 1) new chemical reactions that are useful for medicines, materials, agriculture, etc.; and 2) the immersive training that Ph.D. students go through. I can say from my own experience that it was chemistry boot camp.

A key component of Larry’s research was creating and exploiting a type of reactive functional group in chemistry known as iminium ions. Indeed, all of his graduate students and postdocs became experts in this type of chemistry. It’s no accident, therefore, that when I started my own independent career at UC Berkeley in 1998, I started thinking about novel ways of harnessing these same “Irvine iminium ions” for new catalytic processes. Indeed, it’s possible to draw a straight line from my education in Larry’s lab directly to my group’s “eureka” moment on asymmetric organocatalysis, for which I received the 2021 Nobel Prize in chemistry. In science, we always say that all discoveries are made on the shoulder of giants. I can say that the invention of organocatalysis was made on the shoulders, back and spine of research born at UCI.

As I began my career at Berkeley, I was also immensely fortunate to recruit an exceptional incoming class of young chemists. The seminal experiments noted in our Nobel Prize citation were performed entirely by first-year grad students who had joined my lab only months before. One of them was Vy Dong, a remarkably talented young woman who had just graduated with a B.S. in chemistry from UCI (where, in fact, she conducted undergrad research in Overman’s lab). Vy was a superstar from day one and quickly demonstrated that she had the makings to become a force in academia.

“Given the many serious global challenges we face at the present time, it looks like we might have to do just that: change the world overnight. And to do that, we need chemistry.”

Today, Vy is an independent professor in her own right (back at UCI), and her research program is as impactful as it is innovative. She has now won as many national and international awards in chemistry as any colleague in her age group. Moreover, she represents one of the modern leaders of the field of organic chemistry. While I am immensely proud of my many associations with Irvine, none of them match my pride in watching Vy’s career soar.

From the day I won the Nobel Prize, it has been a whirlwind of new experiences – from interviews with William Shatner to meetings with senators and presidents to being knighted by Queen Elizabeth II to lecturing displaced students in Ukraine to being on national TV here in the States and abroad to being an answer on “Jeopardy!” to receiving season tickets for my favorite soccer team to visiting with students at my hometown grade school … the list goes on and on.

But at the end of the day, you start to realize that these are just experiences – wonderful in many ways but still just experiences. A wise man at UCI once told me that the better you are at something, the more people will pull you away from what you enjoy most. The main thing I have learned over the last 10 months is that I truly love and enjoy chemistry. It has enriched my life yet remains a never-ending puzzle, an unsatisfied intellectual obsession and a workshop for invention that can realistically change the world overnight.

Given the many serious global challenges we face at the present time, it looks like we might have to do just that: change the world overnight. And to do that, we need chemistry.

I went back to UCI in May of this year and was reunited with Larry, Vy, and the wonderful faculty and students on campus. It was an incredibly emotional time for me and not something that I can easily articulate. What I can say is that UCI changed my life in many ways, not least of which was setting me on a path to winning a Nobel Prize. But more importantly, it helped create a life for me, professionally and personally, that I could never have imagined when I first showed up as a naive 21-year-old from Scotland.

UCI gave me a passport to the world, and for that I could not be more grateful.

MacMillan, who won the 2021 Nobel Prize in chemistry, earned a Ph.D. in chemistry at UCI in 1996. He is currently the James S. McDonnell Distinguished University Professor of Chemistry at Princeton University.