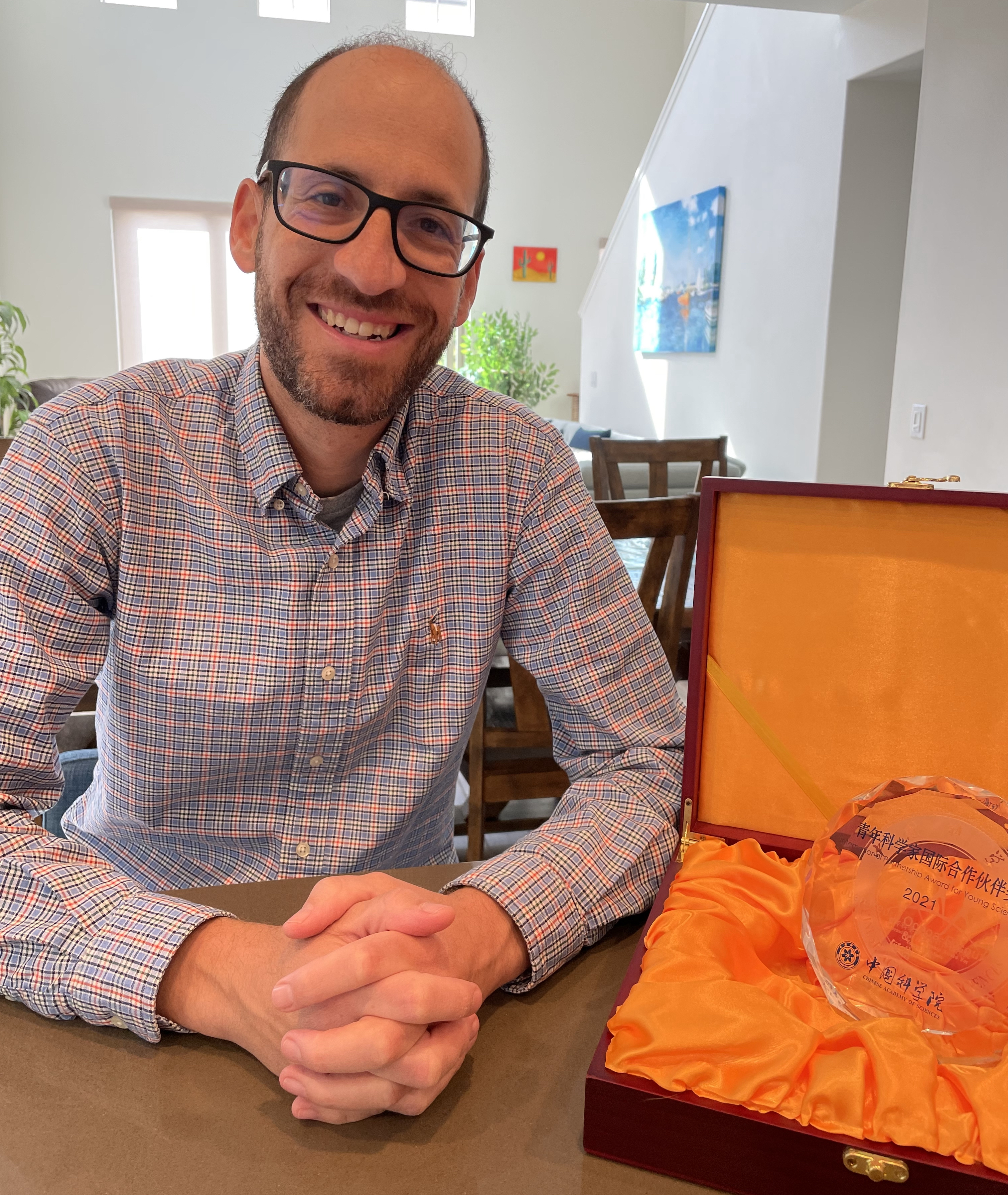 Professor Ochoa-Ricoux poses with his award, which he found out about late one Friday night while doing what he described as "neutrino work."

Physicist Juan Pedro Ochoa-Ricoux, who is an associate professor in the UCI Department of Physics & Astronomy, studies subatomic particles called neutrinos. Ochoa-Ricoux describes neutrinos as the “cousins” of electrons, and he studies them as a collaborator in the Daya Bay and the Jiangmen Underground Neutrino Observatory (JUNO) experiments in China. For his contributions to the experiments — which stand to help physicists precisely measure some critical properties of neutrinos and, by extension, their role in the workings, composition and evolution of the universe — Ochoa-Ricoux recently received the International Partnership Prize for Young Scientists award from the Chinese Academy of Sciences. “I am a very active collaborator in both projects,” said Ochoa-Ricoux. “For Daya Bay, I started out when I was a postdoc as one of the people in charge of installation and commissioning of the experiment.” Ochoa-Ricoux has served in leadership positions, including as one of the two people in charge of calibration for the experiment and one of the analysis coordinators. Daya Bay’s scientific contributions received wide recognition from the scientific community, including the Breakthrough Prize in Fundamental Physics 2016, for which Ochoa-Ricoux is a co-recipient. And for the JUNO experiment, Ochoa-Ricoux is partly responsible for building a subsystem of the detector that consists of 25,600 three-inch tubes and all the associated electronics. These are very sensitive light sensors that will “see the light emitted by neutrino interactions in the detector,” said Ochoa-Ricoux, who’s been elected three times to Daya Bay’s and JUNO’s executive boards, and who’s the co-chair that selects speakers within the JUNO project to go speak at conferences. Ochoa-Ricoux received the prize alongside a Chinese colleague, Dr. Miao He of the Institute of High-Energy Physics in Beijing, who’s been working closely with Ochoa-Ricoux for more than a decade. “It was a wonderful feeling,” Ochoa-Ricoux said about receiving the honor. “I was doing ‘neutrino work’ late on a Friday night when suddenly an email came in from China announcing the prize. It was the cherry on the cake for what has been a wonderful decade of working with Miao and my other colleagues on what is my passion.”