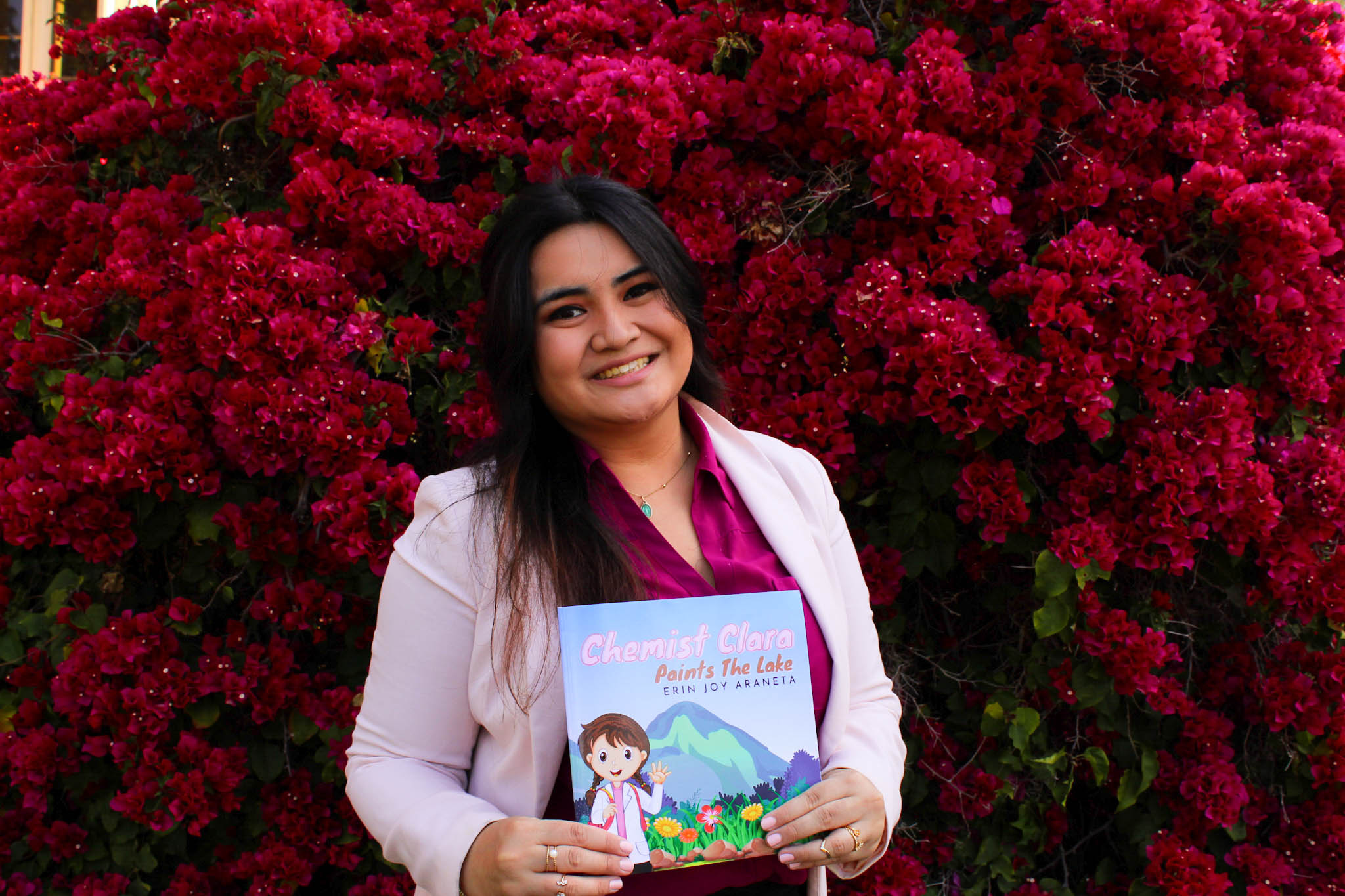 UCI undergraduate Erin Joy Araneta once dreamt of flowers, and then followed those flowers into reality in her new book, Chemist Clara Paints the Lake.

Erin Joy Araneta’s an undergraduate in the UCI Department of Chemistry, and she recently wrote a children’s book called Chemist Clara Paints the Lake. The story starts with these words: “Chemist Clara is a creative and curious scientist. She loves painting and chemical reactions!” This love moves Clara one morning upon waking to trek to a lake called Lake Ester so she can, of course, paint it.

In the book Clara’s eyes are bright, her view of Lake Ester is perfect, and already one feels an itch they didn’t know they had to go out and paint something. Yes, I’d like to paint the lake, too, one thinks.

Araneta likes to go hiking, just as Clara does; “I think I’m Clara,” Araneta said, when asked if she sees herself in her protagonist. In her own story, Araneta moved four years ago from the Philippines, which is where she grew up, to California, where she started studying chemistry at Golden West College in Huntington Beach before coming to UCI and joining the lab of Professor Jenny Yang, where she now helps with research into how to take carbon dioxide out of the air. “We make crystals that capture CO2,” she said.

The idea for her book, like most ideas, has its origin in more than one place. The idea sparked when Araneta wanted to give her 5-year-old cousin a birthday present — but the idea had its roots in the work Araneta does in the Philippines, where she founded a nonprofit called Theory of Joy that aims to give an education to underprivileged members of the Aeta tribe in Zambales in the Philippines. “Their school’s made of bamboo sticks,” Araneta said. Since the nonprofit’s founding just last year, she’s raised enough money to fund construction of a new study center and a water well in Zambales, as well enough to give over 32,000 meals to 65 families.

Then, in her book, Araneta wanted to show students like the one Theory of Joy helps fund what learning about science can do for them.

In the book, Clara, dressed in a white lab coat and sporting and sporting a painter’s palette, tells her mom about the chemistry class she’s taking at school. She then goes on a hike to Lake Ester. She passes a bunny who looks at you like it can see you, and Clara gets to the lake only to discover a plot twist: she doesn’t have any red paint to help her paint the red flowers that surround her.

But she remembers something from her chemistry class: “…in a chemical reaction, we can mix two things together to make something new! Clara crushed some red flowers, mixed them together with water from the lake, and created a new substance, red paint!”

Araneta’s telling a story about how discovering a new bit of knowledge sets the stage for inspiration to strike and for Clara to see something like flowers in a new light. It’s a children’s book, and because of that it reminds one clearly and simply of how knowing anything — even one thing, like how to combine two things to make a new thing — can change a day for you and help you paint a lake.

When you combine two other things — tea and tapioca balls – you get something Araneta loves: boba. She loves going to 7 Leaves boba store in Huntington Beach and ordering Matcha soy with sea cream and boba.

Araneta loves boba, but in 2020 she gave up buying it for over half a year. At the same time, she started selling the jackets she’d wear when she’d go hiking. She gave up her favorite drink and her jackets so she could finance her book.

She gave up those two things because she knew that if she did she could then combine two other things — her love and a little funding — to make something new.

“I was trying to recreate the flowers of my dreams,” she said.