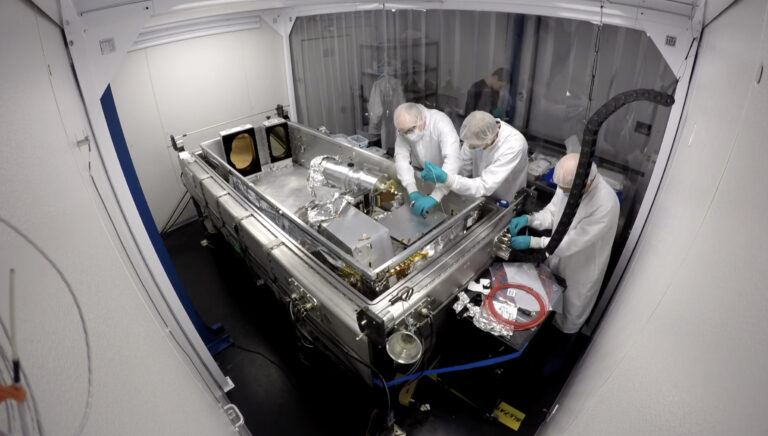 Team members install components on the Habitable-Zone Planet Finder, a spectroscopic instrument attached to the Hobby-Eberly Telescope at McDonald Observatory in Texas. The HPF was designed discover exoplanets orbiting dim M dwarf stars, which are plentiful in the Milky Way galaxy, but in a recent project, it was used to dispute the existence of a planet in the Barnard’s star system.

Irvine, Calif., May 18, 2021 – In 2018, astronomers announced that they had discovered an exoplanet orbiting Barnard’s star, our solar system’s second-closest stellar neighbor, but further analysis by an international group of researchers headed by a graduate student at the University of California, Irvine has cast doubt on the finding.

In a paper accepted for publication in The Astronomical Journal and posted today on the arXiv open-access server, the UCI-led team reports that archival data and new observations from the Habitable-Zone Planet Finder – an exoplanet-hunting instrument attached to the 10-meter Hobby-Eberly Telescope at McDonald Observatory in Texas – do not show signs of a planet in the Barnard’s star system.

Instead, the astronomers suggest that signals initially appearing to be from a “super Earth” measuring 3.3 times the size of our home planet are more likely the result of aliasing from an incomplete sampling of stellar activity bearing similarity to the spots on our own sun.

“Around the time of the 2018 exoplanet announcement, our team was actually observing Barnard’s star as part of a commissioning operation for the new Habitable-Zone Planet Finder,” said lead author Jack Lubin, a physics Ph.D. student at UCI. “But the more data we collected with the HPF and the closer we looked, the more convinced we became that the proposed planet candidate is a false positive.”

The 2018 discovery drew a lot of attention because of the cultural lore and scientific fascination around Barnard’s star, which – because of its supposed relative lack of magnetic activity that varies its signal when observed through astronomical instruments – is thought to be a “Doppler standard” by astronomers. While the finding was not universally accepted at the time, the international collaborative that made the announcement of the proposed exoplanet based its determination on more than 700 observations over 23 years with seven instruments, and its results were published in Nature.

But, according to Lubin, the HPF team had some questions about the relationship between the rotation period of Barnard’s star, which is around 145 days, and the proposed exoplanet’s 233-day orbit. “They are very close to one-year aliases of each other, so what we think has happened is that the rotation of Barnard’s star was sampled in a way that produced a signal at a different period,” he said. “That signal was ascribed to an exoplanet that we now think is not there.”

Furthermore, features on the surface of stars, such as star spots, can cause signals in astronomical observations that mimic a planet’s orbit, causing a false positive exoplanet detection.

The HPF researchers drew their conclusions after testing three different models of the Barnard’s star system. In the first run, they analyzed for a single planet with the same characteristics as those in the 2018 paper with no stellar activity. Next, they ran the experiment accounting for the planet plus an additional signal of activity from the star. Then they conducted a test with no planet but with stellar activity.

“We found that the model that only accounts for stellar activity fits the data the best,” Lubin said.

The team subsequently performed a year-by-year analysis of the signaling data from Barnard’s star. It revealed that the data suggesting the presence of a planet was strongest around the middle of the dataset but weak at other times.

“Stellar activity signals can be transient, while you would expect planetary signals to be persistent,” said co-author Suvrath Mahadevan, professor of astronomy & astrophysics at Pennsylvania State University and HPF principal investigator. “These results show how tricky it can be to distinguish a planet signal from stellar activity but also show us areas where our understanding of stars needs to improve in order for us to find their low-mass planets.”

Co-author Paul Robertson, UCI assistant professor of physics & astronomy and HPF project scientist, said: “There is some irony in this finding, because the main purpose of the Habitable-Zone Planet Finder is to discover exoplanets. But we’re still encouraged by this work, because the instrument’s outstanding measurement precision is what gives us such confidence that no such signal exists.”

This is not the first time a Barnard’s star exoplanet discovery has been called into question. In 1963, astronomer Peter van de Kamp believed that he had detected a wobble of the star, which he attributed to a planet; he later updated his findings to add a second planet to the system. But in 1973, astronomer John Hershey studied the same photographic plates used by Van de Kamp and determined that the movement was caused by a flaw from an upgrade to the telescope equipment used in the initial observation. Van de Kamp’s planets were not supported by more recent studies with state-of-the-art instruments.

This HPF project was funded by the National Science Foundation, NASA, the Heising-Simons Foundation and the Center for Exoplanets and Habitable Worlds at Penn State.

The Hobby-Eberly Telescope is a joint project of the University of Texas at Austin, Penn State, and Germany’s Ludwig Maximilian University of Munich and Georg August University of Göttingen. The telescope is named in honor of its principal benefactors, William P. Hobby and Robert E. Eberly.