Lifting up a generation of Native American geoscientists 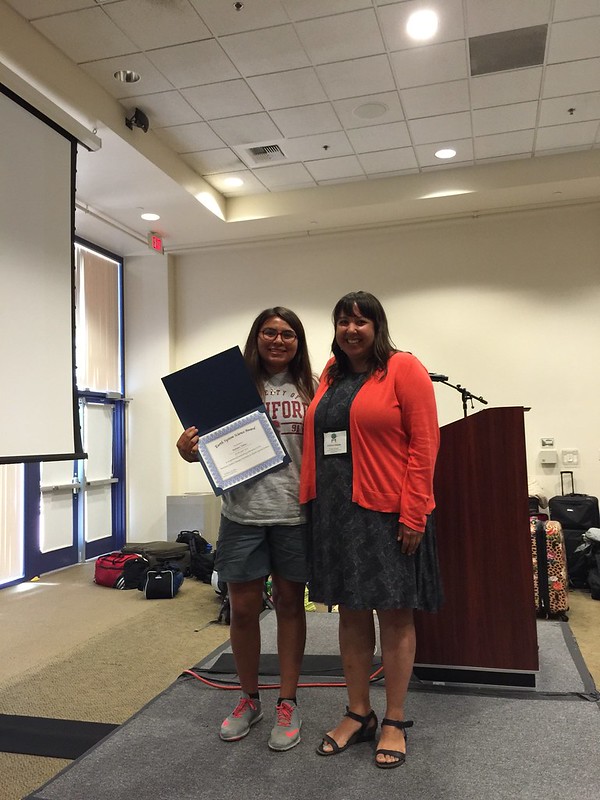 Top: The AISIESS class of 2016 poses for a photograph Bottom: Nizhoni Tallas, an alumna of AISIESS, poses with program-runner Kathleen Johnson.

Native Americans live in some of the most rural parts of the United States. The Navajo Nation extends across the deserts of northeastern Arizona with extensions into southern Utah and western New Mexico, and, due in part to its remoteness and also the harshness of the terrain that defines it, the tribe faces unique environmental problems.

Those problems, including struggles to find and maintain access to clean, potable water — a problem exacerbated by a multi-year drought and climate change — as well as hazards associated with uranium mining, demand complex solutions informed by an understanding of the scientific issues at hand.

But, according to Kathleen Johnson, a professor in the UCI Department of Earth System Science, many of the people tasked with imagining solutions to these problems do not have the kind of scientific training that would position them to make the best decisions they can. “Native Americans are often not geoscientists, and yet they’re tasked with addressing a huge number of environmental challenges,” Johnson said, who added that Native Americans are the most underrepresented population in the geosciences.

What’s more is that “a lot of tribes have environmental offices led by non-native people,” Johnson said, which can present a challenge when it comes to understanding which environmental solutions are the best fit for a particular tribe.

This gap is part of what spurred Johnson to create the American Indian Summer Institute in Earth System Science (AISIESS) which ran from 2012 to 2017, and which brought over 130 Native American teen students from across the U.S. to UCI to learn about the science behind the environmental problems facing them. The program included a one week camping trip to the La Jolla Band of Luiseño Indians reservation in San Diego County, where the students conducted field projects with faculty, graduate students and Tribal environmental staff. The second week of the program happened at UCI, where students got a taste of college life and did research on topics affecting their own Tribal communities. AISIESS wove Native studies and cultural activities throughout the activities, and encouraged students to bring their “whole selves to the program and to draw from both western science and Indigenous knowledge in their research,” Johnson said.

One of those students was Nizhoni Tallas, who grew up in Rough Rock, Arizona, a Navajo community that, according to the recent census, is home to just 429 people. One of the things Tallas remembers most of all is the land around Rough Rock. “There’s a mesa right by my house, and there’s a canyon in my backyard,” she said. Tallas has six siblings — all brothers, and she’s the only girl. She would tag along with her brothers and go on hikes. “Just growing up in the environment opened my eyes to how important it is to serve and also protect these areas. That enhanced my understanding of the amount of respect and care we should have for Mother Earth just like how my ancestors did and how we should carry on that knowledge,” Tallas said.

When Tallas came to AISIESS, she was a junior in high school, and it was during AISIESS, she explained, that she did a project focusing on the drought facing the Navajo Nation, as well as how climate change-driven sea level rise is affecting coastal Native American communities in Alaska.

The idea was to help Native Americans like Tallas develop a sense of pride in their Native identity and to help them envision themselves as scientists — two things they may not have had before, explained Johnson, who, herself a member of the Grand Traverse Band of Ottawa and Chippewa Indians, hopes to one day resurrect AISIESS, which no longer exists due to a lack of funding.

And the efforts seem to be working.

“Even though I was just in high school, it was a major point in helping me see there are a lot of big issues happening to tribal communities in terms of environmental problems, Tallas said. “And I was very passionate about bringing awareness to those issues.”

Tallas took that passion with her to college, where, at Virginia Tech, she majored in natural resources and conservation. Soon she’ll be a Ph.D. student at the University of Arizona, where she plans to work to understand how traditional tribal knowledge of land in the Navajo Nation can inform everything from solutions to the environmental problems facing her tribe to building out recreational infrastructure like public trails on Navajo land.

“It’s been a wild ride, learning about all the different ways of knowing,” she said. “I really want to go even more into and learn more about is traditional ecological knowledge, for sure, and how that plays a key role in natural resource management, and just the way people interact with land and the environment. Because I think that will be a big influence on how people kind of think of land — how they feel when they’re hiking — so trying to capture those ways of knowing and also implementing plans that also include Indigenous people, their knowledge, and how they would like these plans to be managed.”

Tallas underscored that she wants those who manage lands to be aware that Native Americans need to have a seat at the table when decisions happen and that they shouldn’t have to fight for that seat.

“Natives aren’t of the past,” she said. We’re still here, and we’re thriving.”