Understanding how HIV propagates in the body could help with the development of new treatments for the disease it causes — AIDS.
Lucas Joel
UCI Physical Sciences Communications 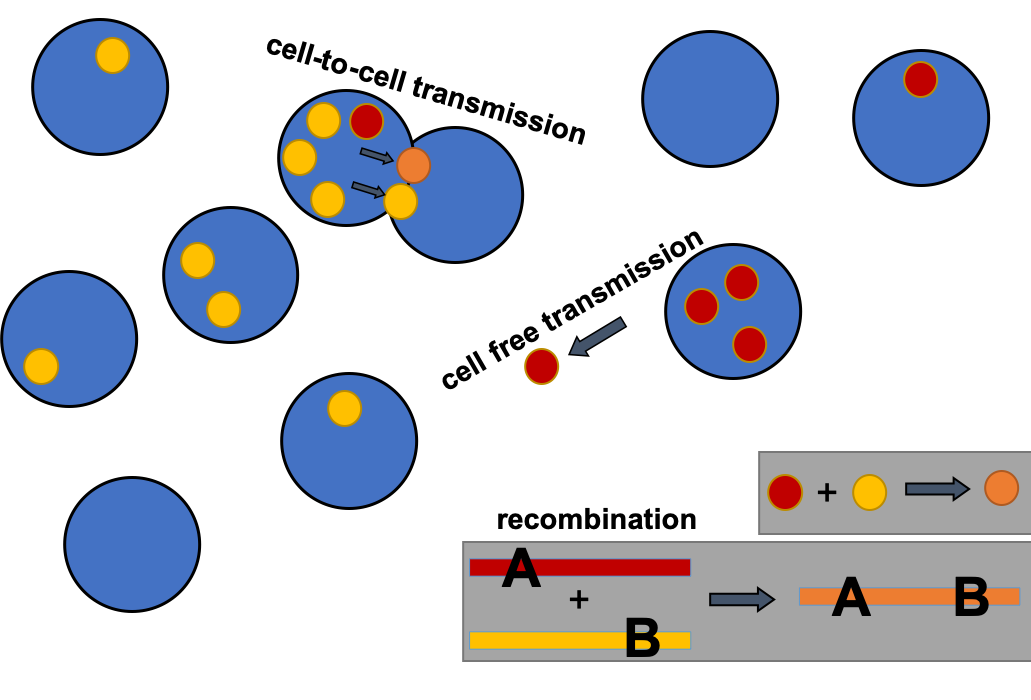 A graphic that shows the cells (blue circles) of a patient infected by HIV (yellow, red and orange circles). Here, a red and yellow HIV strain can combine to form a hybrid orange strain that can be even more deadly than its predecessors. The strains then travel from one cell to the next either by free-floating between two cells, or by entering a new cell when two cells connect through a process called "synaptic transmission."

The coronavirus/COVID-19 pandemic is still raging, but a year on the scourge is finally showing the first signs of waning. The HIV/AIDS pandemic, on the other hand, which officially began in 1981, is now 40 years old and scientists are no closer to developing a vaccine for the virus than they were when the virus first emerged.

Part of the reason is that HIV evolves at a much faster pace than coronavirus does, and researchers developing treatments have a hard time keeping pace.

But effective treatments for HIV/AIDS do exist, and their development comes from an ever-deepening understanding of how HIV spreads around the body. In new research from a team led by mathematicians from the University of California, Irvine, researchers describe just how important two HIV transmission pathways are — a finding that could lead to better treatment strategies.

One of the propagation pathways HIV takes is when one infected cell in your body bumps into and infects another, uninfected cell. This, the researchers report in Virus Evolution, accounts for about half the paths that HIV takes to spread.

The other main avenue by which HIV propagates is when free-floating virus particles encounter and then infect a cell.

“In this paper, we worked with experimental collaborators that had developed this really cool experimental method to isolate different pathways by which HIV transmits,” said the lead author behind the work, Jesse Kreger, who will soon receive his Ph.D. from the UC Irvine Department of Mathematics.

“Our job is to take the data from these experiments and build a mathematical model that explains the data,” Kreger said.

Like pirates boarding a besieged vessel, two cells will form a bridge and HIV particles will traverse the bridge and infect a new cell in a process called “synaptic transmission.” Though widely known about since the early 2000s, it wasn’t clear until now to what extent the virus used synaptic transmission to get around.

But from the mathematical modeling work, Kreger and his team found that, on average, three different copies of HIV will successfully transmit from one cell to the next during a synaptic event. This makes synaptic transmission potentially more harmful than the free virus transmission route because, with three different HIV strains infecting a cell — each with slightly different genetic makeups, and, thus, different strengths and weaknesses — odds are higher that one of those particles will be able to resist the effects of drug treatments.

“I’m hopeful that a better understanding of synaptic transmissions and how it can lead to more powerful HIV transmission will allow us to develop new treatments,” said Kreger.

The team also characterized another, less obvious HIV transmission pathway, one called “latent transmission,” wherein a free-floating virus particle will infect a cell — but then, instead of working to reproduce itself within the cell, the virus lays dormant. Kreger and his team discovered that latent transmissions account for about 40% of free virus transmissions. Such latently infected cells, Kreger explained, are the reason no-body’s ever been truly “cured” of HIV before, as such cells are impossible to detect.

The hope is that, as with synaptic transmission, a clearer picture of the routes HIV follows as it courses through a patient will give researchers the information they need to develop more finely-tuned treatments.