Better Batteries for a Greener Tomorrow 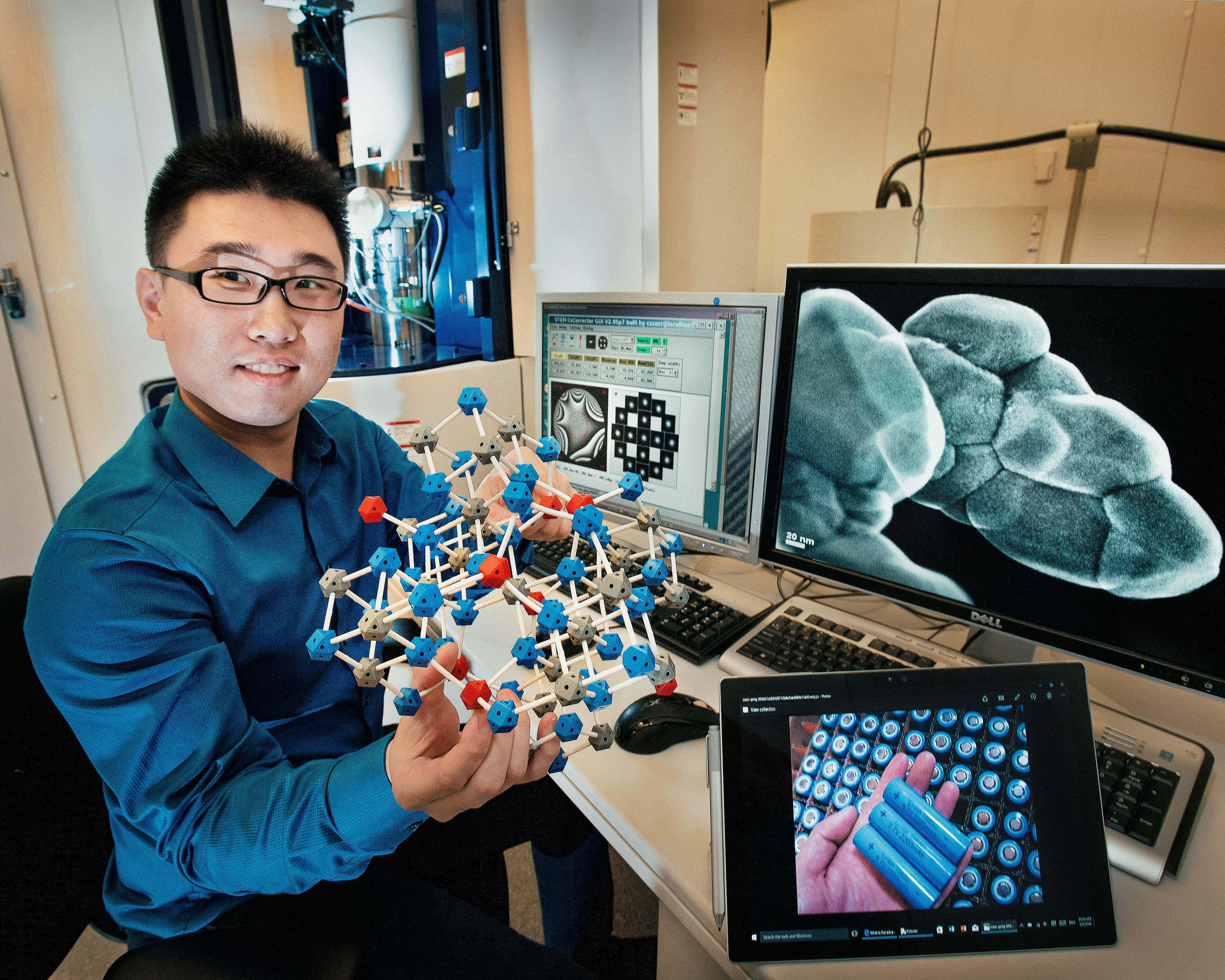 Professor Xin shows off a model of the crystal structure chemicals inside the lithium-ion batteries that go in your phones and electric cars.

Imagine boarding an airplane in the future. If, in your imagination, the plane’s powered by jet fuel, you might be right. But Huolin Xin, a professor in the UCI Department of Physics & Astronomy, wants you to be wrong, because he and his research group see a future — maybe only a couple decades away — where airplanes are completely electrified thanks to what he anticipates will be quantum leaps in battery technology in labs like his that’ll allow the aviation industry to ditch fossil fuels and go fully electric.

The aviation industry emits about 918 million metric tons of carbon dioxide into the atmosphere each year — a staggering number, but one that’s still only about 2.4% of all greenhouse gas emissions. Still, according to the United Nations’ International Civil Aviation Organization, aviation greenhouse gas emissions are set to magnify as demand magnifies, and, by 2050, could triple. In Xin’s lab, he and his group are developing materials that promise to make batteries better to the point where the jet fuel era can finally become a historical footnote.

This interview’s been edited for clarity and brevity.

LJ: I’ve read about what you do, from the Mars work to better batteries. Could you tell me a bit about what drives you to do this kind of research?

HX: One of the things that I really care about is energy. I think the first half of the 21st century is about quantum science, and it’s about energy, and it’s also about sustainable energy.

LJ: Is the push for a greener future a big driver for you — or is it more about basic intellectual curiosity?

HX: Both are important. If you were to only to address the very fundamental problem, that’s good. That’s what research in the university is about: we want to understand how each reaction works and how it works. But some are useful in our daily lives, and some are useful for driving future innovations. So, and specifically for me, I tend to work on the fundamental problems in the domain where it will drive society into a more sustainable future.

LJ: What do you see as the ideal, ultimate goal of your research?

HX: That the future of aviation will be fully electric. That would be the next mark to make. And that requires a quantum change, a quantum leap in battery technology, meaning that you need to double or triple the energy densities of batteries, and you need to make it safer. That’s what I’m working on.

LJ: Listening to you talk, it sounds like you see this as a real possibility and not just science fiction.

HX: It’s possible. Between the research in my lab to having something that can be commercialized, that can be on the shelf, it could take 20 years. It could take shorter if there’s a huge investment from private and the government sectors. What private sector is good at — they’re super good at engineering. Tweaking processes, making it cheaper, making larger-scale manufacturing, improving all the solutions in real application conditions. However, what they’re not good at is fundamentally changing the chemistry that could double or triple it. Their improvement is less than 10% per year. The research in the university labs is really where the innovations happen that could provide these quantum leaps. We’re constantly thinking about new materials that could double, triple, even quadruple the energy densities of today’s batteries.

LJ: What does it look like moving research results from the lab to industry?

HX: My lab has invented what’s called a UCI-Gen2 lithium-ion battery chemistry that has zero reliance on cobalt — the ‘blood diamond’ in the electric vehicle industry, as much of it comes from the war-torn regions in the Democratic Republic of Congo. It outperforms the state-of-the-art lithium nickel-cobalt-manganese oxide chemistry in terms of cycle life, price and safety. We’re working with the entrepreneurs in UCI Beall Innovation to commercialize this chemistry. If successful, your future electric vehicles will run with UCI chemistry.

LJ: Planes seem like a tougher nut to crack than cars, though. No? Planes are just so much bigger.

HX: I’m an optimistic person. In my opinion, there’s nothing that can’t be solved. We used to think that you could never have a computer program that could beat a Go master, right? And it happened two years ago. It’s just a matter of time.