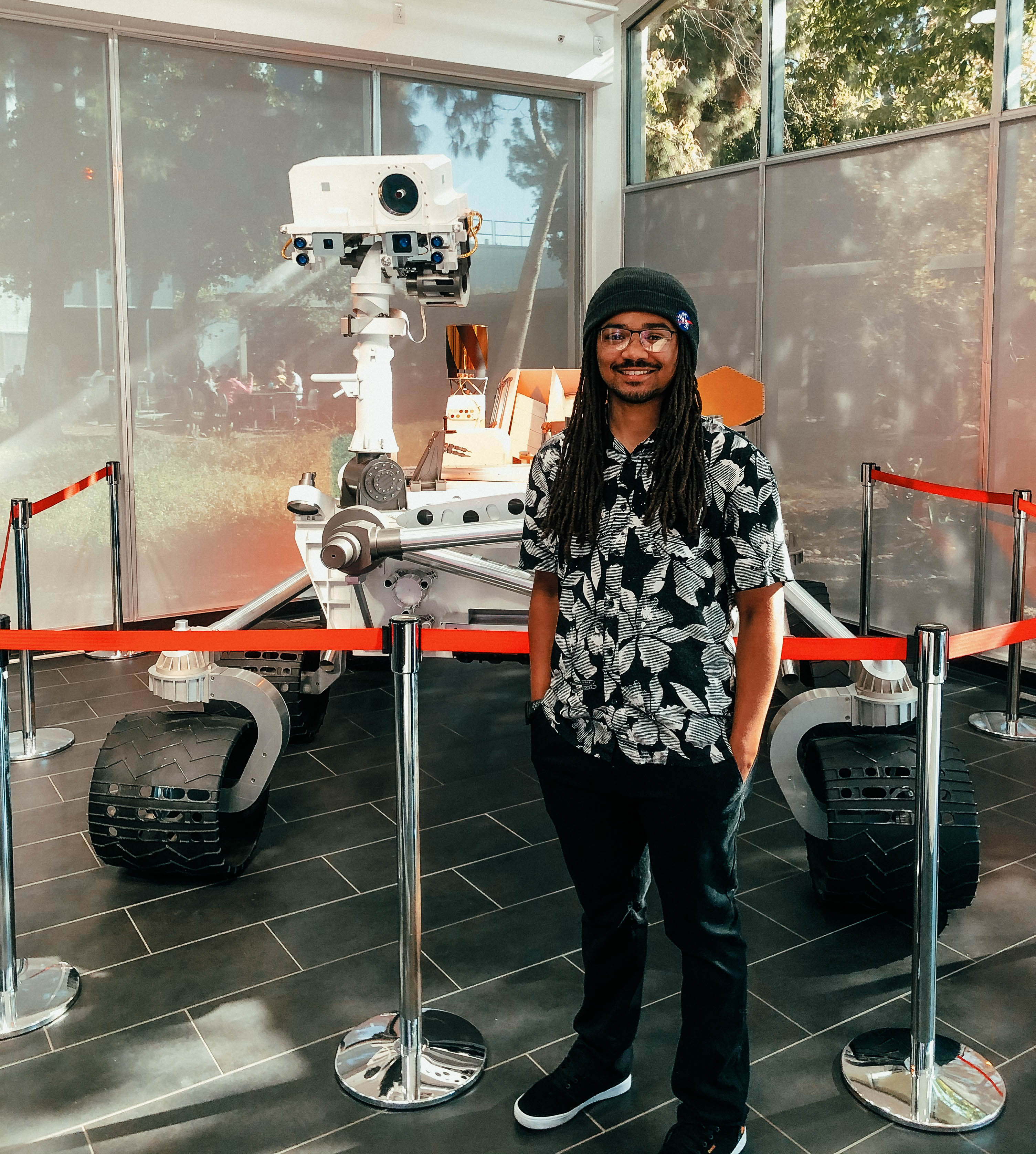 Baxter poses in front of a model of NASA's new Mars Perseverance rover. Baxter got to see testing of the rover in action.

Before Devontae “Tae” Baxter found his way to UCI and started studying galaxies — before he started wondering about why it is many of the galaxies that you might see peering through a telescope aren’t forming any new stars — he liked to skateboard the streets of Atlanta, Georgia. The galaxies he studies these days as a Ph.D. student working with Professor Michael Cooper in the Department of Physics & Astronomy were in the sky over his head as he did tricks on the streets — but they weren’t on his mind. Not yet, at least.

“I’d always been interested in science as a kid — but I was never an academic,” Baxter said over a Zoom chat while sporting a beanie with a NASA logo on it  — their famous meatball logo — and with a Zoom background featuring a scene from an extraterrestrial planet from the Japanese animé show Dragon Ball Z. “I was more interested in spending time with my friends,” he said.

Baxter, though, remembers having a teenage fascination with NASA, one fostered by a high school math teacher named Carl Lashley, who’d been a NASA aerospace engineer. Lashley told Baxter about “the importance of being scientifically literate,” Baxter said. “His passion for STEM inspired me and his recognition of my potential provided me with the confidence and encouragement that I needed to eventually pursue a career as a scientist.”

Later, after he finished high school and after he’d finish working his construction job as a brick mason building mostly residential homes, "I started going to libraries,” Baxter said. After getting to a library in Stockbridge, Georgia, driven perhaps by Mr. Lashley’s words, he gravitated toward the space science section, and it was there that he met, in the pages of books and on DVDs, one of science and astronomy’s chief popularizers: Carl Sagan. Baxter watched Sagan’s famous COSMOS series, which first aired on PBS in 1980.

“I mostly remember being fascinated by the theory of relativity, dark matter, the origins of the Universe and the formation of galaxies,” Baxter said. “The ‘big picture’ questions left me fascinated and itching to learn more so much so that I wanted to contribute to humanity’s understanding of life, the nature of reality and the Universe.”

Baxter enrolled at his local community college, Georgia Perimeter College, where he started taking physics classes. “I fell in love,” he said.

He went on to Georgia Tech, and then, in 2017, to UCI, where he’s now trying to understand what might be suppressing star formation — a process called “quenching” — in low-mass galaxies that exist in groups and clusters, and which orbit around more massive “central” galaxies some galaxies. There’re ideas about what might be causing this, Baxter explained, but no single trigger is a clear culprit.

Stars form from coalescing gas, and a quenched galaxy doesn’t have the gas it needs to make new stars. How the gas gets away is the question on Baxter’s mind: It could be tidal forces, he explained, wherein gravitational pushes and tugs from the most massive galaxy in the group or cluster strip a galaxy of the gas it needs to make new stars. Or, “as a galaxy moves through the hot and dense medium of the central galaxy, the drag force encountered steadily depletes its gas reservoir,” Baxter said. A satellite galaxy may also just not be able to acquire more gas in the part of space it’s in. “It becomes starved,” said Baxter.

Each of these quenching mechanisms requires unique amounts of time, explained Baxter, and, knowing that, and after figuring out how long the galaxy’s been quenching, he can constrain which exact mechanism’s probably at work.

“This information will help improve galaxy formation models such that we can have a more complete understanding of the physical mechanisms that dominate in different environments and mass regimes,” said Baxter.

Before the stars were on his mind, Baxter thoughts gravitated toward skateboarding — which he still does — and also art. He was a sculptor, and he’d sculpt things like kangaroos and bears out of clay. Looking back at his story, at the uncertainty he may've felt about a career as an astrophysicist, when we spoke he sculpted some advice for anyone feeling similarly torn: “Never give up, and never stop believing.”