Before she was a UCI Ph.D. student in Earth System Science studying marine microorganisms, she played in steelpan bands and ran a theatre company in Jamaica.
Lucas Joel
UCI Physical Sciences Communications 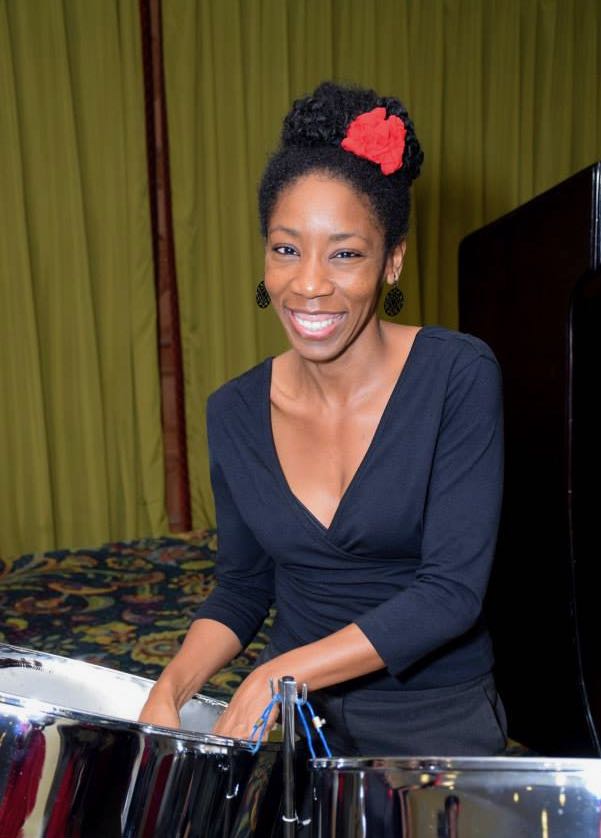 Before she ever thought about getting a Ph.D., Raisha Lovindeer ran a theater company called Backstory. The company produced plays and musicals, including a historical play about four friends at the Myrtle Bank Hotel in 1949 Jamaica.

Lovindeer, who hails from Jamaica, is an Earth System Science Ph.D. student at UCI. She studies the oceans, which she grew to love as a child growing up on Jamaica’s shores. Nowadays, she lives just outside New York City with her husband; she moved to New York from UCI to live with him after the pandemic hit, because much of the marine microorganism research she does nowadays can be done on a computer, and she doesn’t need to be on campus in a lab, which is where she was for most of her graduate work. “It’s one of the silver linings of the pandemic,” Lovindeer said.

She hasn’t been back to Jamaica since coronavirus came, but Lovindeer often remembers the white sandy shorelines of her home island and the warm ocean waves that crash there. “I spent a lot of time on the beach,” she said. She also spent a lot of time playing in a steelpan band, even winning 3rd place at the World Steelband Music Festival in Trinidad & Tobago in 2000, and managing the 40-member band’s participation in International Panorama in Trinidad & Tobago in 2015.

She remembers the beaches and the music of Jamaica — but she remembers something else: sargassum. The word sounds like the thing it describes: tangled masses of seaweed that change the white shores of Jamaica into colors less evocative of what you might see on a postcard from the Caribbean, and more evocative of leftovers forgotten for months at the back of the fridge. Sargassum smothers the beaches in shades of browns and oranges that bring with them fetid smells; according to Lovindeer, rotting sargassum fills beaches with a smell reminiscent of rotten eggs. The seaweed used to only spawn in northern waters of the Atlantic Ocean, but, as the climate warms, oceans warm, run-off from land to the ocean increases, and sargassum’s spawning waters are expanding in range.

It’s all helping decimate one of the island’s (not to mention one of Florida’s and Mexico’s) chief industries: tourism.

Lovindeer points to sargassum’s invasion of Jamaican beaches as one of the reasons she struck out on a path to return to research. That path led her to UCI to get her Ph.D. in the lab of Professor Kate Mackey, where she’s studying microorganisms called cyanobacteria, which are responsible for making most of the oxygen in the atmosphere that we breathe. Her initial draw to ocean science were the weekly field trips she got to take when she was getting her undergraduate degree at the University of the West Indies in Jamaica. Those trips took her to the reefs that cradle Jamaica, and she’d go snorkeling in the Caribbean’s warm waters. She said that any science that opened the door for her to get out into the ocean was something she wanted to do, so when she came to UCI, she was excited about its closeness to the oceans — until she found out about the California Current, which brings ice-cold water from the Arctic down past our coast. “It’s freezing!” she said.

In Mackey’s lab, Lovindeer studies the ocean’s surface waters and the cyanobacteria that call those waters home. She wants to know how climate change is going to affect those bacteria just as it’s affecting sargassum. But it’s not always easy knowing the distribution of different kinds of cyanobacteria, which is why Lovindeer’s interested in using satellite images to try and identify cyanobacteria by their color — “they give us an idea of what’s in the water,” she said — a maneuver made tricky by the fact that some species change color, which means satellite pictures may not always be painting, well, a clear picture.

Understanding the factors that influence the color of an organism could help scientists develop early warning systems for something called harmful algal blooms — massive blooms of toxin-producing algae that can invade coastal waters and, in some cases, poison the water supplies of entire cities, which happened in Toledo, Ohio in 2014 when a harmful algal bloom from Lake Erie churned to life thanks in large part to nutrients that washed into the lake from fertilizer used in agriculture.

As an up-and-coming postdoctoral researcher at the University of British Columbia, and a science officer at the International Ocean Color Coordinating Group, one of Lovindeer’s long-term personal projects will involve using satellites and the pictures they take of Earth’s surface to develop a sargassum warning system for islands like Jamaica.