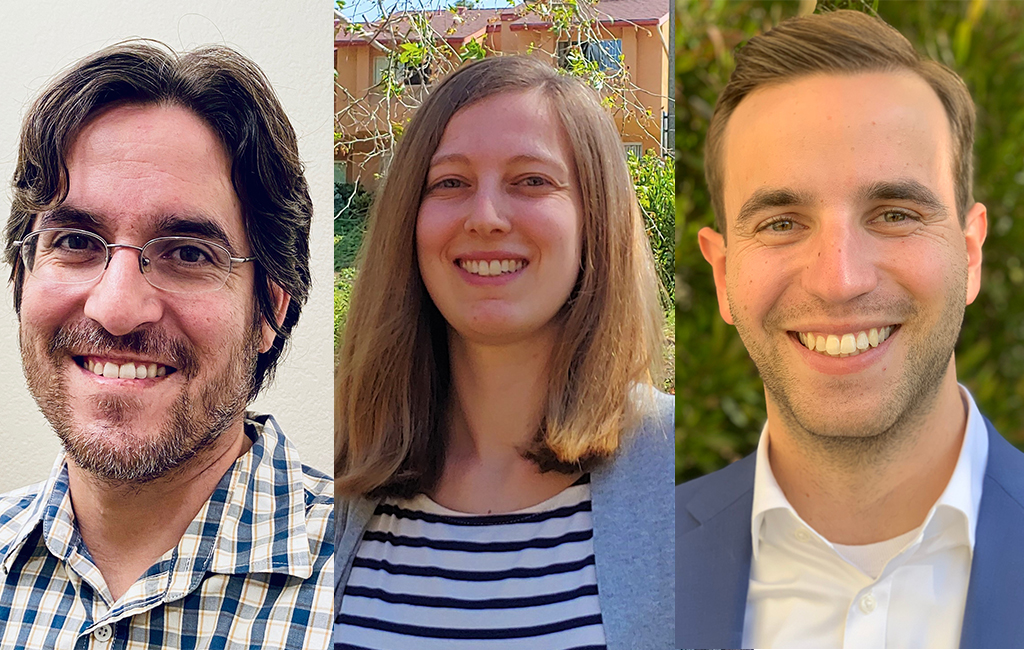 The first COMP leaders, from left to right: John Peca-Medlin, Kelly Isham and Jesse Kreger. COMP, among other things, aims to normalize the common — but oft-unsung — struggles of new graduate students. “I think having conversations about how stressed everyone is, and how there are aspects for everyone that are hard, could really help make the first-years feel like they’re not along,” Isham said.

The office was in room 420 in Rowland Hall, on the fourth floor. Inside there was a smattering of desks, and at one of those desks, back in 2016, Kelly Isham began her career as a Ph.D. student in the UCI Department of Mathematics. Isham, who studies number theory who will soon leave UCI, points to that first-year office as what was, until now, one of the few spaces — if not the space — in her department where new graduate students could find community when they first came to campus. The office was, before the pandemic, a space where new students could talk and connect and start to feel that, though the path forward might be hard, they were not alone.

Even back then, however, a sense of belonging was elusive. Isham was one of only three women in an incoming graduate student class of 25, and she watched as fellow students dropped out of the program. She recalls feeling like an imposter, that she, too, maybe didn’t belong where she was. “It’s easy to think that everyone else is doing incredibly well,” said Isham.

After the pandemic hit, the thin community lifeline that was the first-year office suddenly severed, and incoming math graduate students had nothing to help them connect to a university that many of them, according to John Peca-Medlin, a mathematician who studies random matrix theory and who’s a sixth-year Ph.D. student at UCI, have never even seen in person. Then, after the murder of an unarmed Black man named George Floyd by a white police officer in Minneapolis laid bare the rot of racism that courses through the U.S., the lack of a diverse student body — be it the lack of women or underrepresented minorities — in the Department came into cuttingly sharp focus, and an outcry for change came from the math graduate student community. Students called for change in the extent to which the Department fosters a sense of community, and in how it instills diversity in its ranks, and this spurred Isham, together with fellow Ph.D. student and mathematician Jesse Kreger, to found the Community, Outreach, and Mentoring Program (COMP) this past summer.

“The broad goal of COMP is really a culture change,” said Kreger, whose research revolves around trying to understand how HIV evolves. The aim of COMP, he explained, is to build community and to run outreach efforts that encourage underrepresented students to pursue math or another STEM-related field. “I think we have a great department, and I think we can build a great culture in our department, too,” said Kreger.

Isham and Kreger’s story is a common one at Physical Sciences. Across from Rowland Hall, in Reines Hall, two current graduate students in the Department of Physics & Astronomy founded the Physics & Astronomy Community Excellence (PACE) program. PACE works to pair new grads with mentors who can be a guide, and it runs a one-hour seminar that gives new grads a forum to connect and commiserate.  "We were definitely inspired by PACE and the physics department," Kreger said.

Like PACE, COMP pairs new graduate students with more senior graduate mentors who’ll serve as guides, and it runs a mandatory weekly seminar for first- and second-year grads that will see, among other things, a presentation from the Association for Women in Mathematics on what it means to be a woman working in math. The Department of Mathematics ran a peer-mentoring program before, but it was hit-or-miss; Peca-Medlin, the inaugural COMP fellow who will run the program, remembers how when he first came to UCI in 2015, he had a mentor that vanished after one or two meetings. “I followed up a couple times, and it never really went anywhere,” he said. But now, Peca-Medlin will check in with mentors and mentees to see how their pairing is working, and, if need be, find students new mentors.

“I hope that COMP really normalizes experiences in grad school and makes people kind of feel like ‘yes, grad school is hard, but everyone feels that way, and we can all get through it together’,” said Isham.

Peca-Medlin will be running virtual events for grads, like virtual movie and game nights. And soon, COMP will start giving presentations — digital at first, and, one day, in-person — at local, minority-serving schools in an effort to reach interested students and show them that they, too, can belong in a field that until then, deliberately or not, never felt like an open door.

“My view of things is that humanity has to take place beforehand — we’re humans first and mathematicians second,” said Kreger. “The math department, with leadership from the School of Physical Sciences, has started to do a much better job of instilling that culture and growing that culture.”