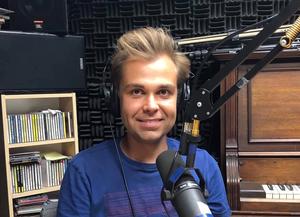 KUCI interviewed Labe in 2018 for a story about Arctic climate change.

Climate scientist Zack Labe came to UCI in 2015, and when he got to Orange County, where the sun never seems to set, he didn’t know there would be so much ice in his future. Labe, who graduated this quarter with a Ph.D. from the Department of Earth System Science, came to UCI from Cornell University with an bachelor’s in atmospheric sciences, and he spent his five years here modeling how ocean sea ice in the Arctic helps create the weather in places like North America, Europe and Asia.

“I feel like my dissertation really tells a story,” Labe said. “I really focus a lot on the thickness of Arctic sea ice, and found that the loss, the thinning of Arctic sea ice can actually reinforce the amount of warming that’s happening in Arctic climate change.”

Before, researchers had only really considered how sea ice surface area coverage — not sea ice thickness — impacts weather, but Labe helped alter this paradigm. “Declining sea ice thickness is going to affect weather going into the future,” he said.

These days, after driving east for two days, Labe’s living in Fort Collins, Colo. where this coming Monday he’ll start as a post-doctoral researcher at Colorado State University. There, he plans to investigate one of his field’s most enduring mysteries: How do climate scientists like him tell the difference between natural climate change and man-made climate change?

“It’s very difficult to disentangle,” Labe said. “I’m excited to get started on something a little different.”

You can find out more about Labe by following him on Twitter: @ZLabe