Virtual Talk: Lessons Learned From Bacteria as we Fight COVID-19 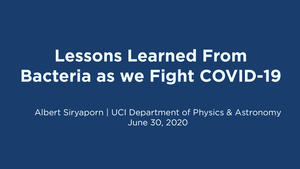 The survival of bacteria is constantly threatened by a multitude of viruses and antimicrobial mechanisms. Professor Albert Siryaporn's talk will explain recent discoveries by his lab about how bacteria successfully defend against viral attacks and how these systems may be adapted to potentially combat SARS-CoV-2.

Dr. Siryaporn is an assistant professor in the departments of Physics & Astronomy and Molecular Biology & Biochemistry. He studies the dynamics of bacteria using a range of biophysical techniques. His group investigates antibiotic resistance, viral infection, biofilms, metabolism, and host-microbe interactions. He is currently developing a method to adapt highly effective bacterial anti-viral mechanisms to combat SARS-CoV-2. Professor Siryaporn received his B.S. in Physics from Brown University and his Ph.D. in Physics & Astronomy from the University of Pennsylvania. After his postdoctoral training at Princeton University, he joined the faculty at UCI in 2016. He is the recipient of the NIH K22 Career Transition Award.