Blu-ray disc lasers could help kill the coronavirus, according to UC Irvine researchers 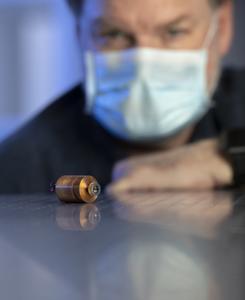 Chris Barty, UCI Distinguished Professor of physics and astronomy, is leading a team researching the use of Blu-ray lasers to kill the coronavirus that causes COVID-19.

Not only can Blu-ray lasers replay the “Harry Potter” series 50 times over, they may possibly help kill the coronavirus.

UC Irvine researchers are investigating whether the lasers inside Blu-ray players can be used as a disinfectant to fight the spread of the deadly virus.

UCI professor Chris Barty, who is leading the research team, envisions lasers in ventilation systems disinfecting the air, lasers as small as a key fob that could be used to sanitize hands and lasers built into face masks that clean the air as it filters through.

“You can imagine many many ways you could deploy the technology if it’s cheap enough,” Barty said.

When combined with special crystals, the Blu-ray lasers can convert to UVC light, which has been shown to be effective at eliminating microbes. UVC has been used in the past to kill germs, including by hospitals. But Barty’s method may be much more efficient and cost-effective.

Barty said Blu-ray disc lasers have to be high quality because they need to read a lot of information in the disc player.

“If we can get the 10% to 20% conversion of the Blu-ray light into UVC, then this is really very different than what the current methods of generation are,” Barty said. “Factors of 10 to 100 more output per dollar.”

Hospitals currently use robots to sterilize rooms but in addition to UVC, they also give off UVA and UVB lights, which are dangerous for humans. Barty said the rooms have to be cleared before the robot can begin sterilizing.

Though UVC light is powerful, Barty said the tears in a person’s eyes and dead skin cells are enough to absorb and protect people from the harmful light rays.

The lasers his team is working on could be a cost-effective alternative for hospitals.

Barty’s team is made up of five graduate students, two undergraduates and one post-doctoral student. The group is currently waiting on all the parts to arrive before they can get fully started on the study. They do have some of the laser diodes, but it will take a month or so for the crystals to arrive.

“Some time in midsummer, we are going to be generating UVC,” Barty said.

There are currently several companies online selling UV light wands, claiming they can sterilize surfaces better than other sources, though Barty said the products aren’t very powerful. It would take several minutes of exposure to sterilize a cell phone.

“You have to have enough light to be useful and in an economic range that makes sense for wide deployment,” Barty said.