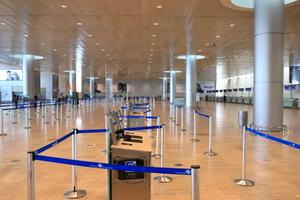 Security stations stand empty in the check-in hall at Ben Gurion Airport on May 14, 2020 near Tel Aviv, Israel.

On April 7, global carbon dioxide emissions plummeted to levels not seen since 2006, according to a study released yesterday that suggests the coronavirus pandemic might have led to the largest reduction in CO2 ever recorded.

But few scientists are cheering the sudden change. To the contrary, researchers increasingly view the precipitous drop in emissions as a sign of how much work the world has to do to avoid the worst impacts of climate change.

On that day, almost 90% of global CO2 was released in areas under lockdown to avoid spreading the virus. A study published yesterday in Nature Climate Change estimates emissions on April 7 fell by 17%, more than any other day during the first four months of 2020.

At first glance, a reduction of that magnitude appears massive. In comparison, global emissions dropped 1.5% during the Great Recession in 2009.

But a deeper look shows that individual changes in behavior produce limited emission reductions. Much of the world stopped traveling, eating in restaurants and buying merchandise. It was an unmatched experiment and yet 80% of emissions were untouched.

“It shocked me at how much emissions have dropped temporarily and showed me how hard it is to reduce emissions annually for years,” said Rob Jackson, an earth scientist at Stanford University and a co-author of the study.

His research estimates that global emissions will fall 4% in 2020 if the world returns to normal this summer. That figure could grow to 7% if lockdowns persist in parts of the world for the rest of the year.

Even an emissions drop of that scale would fall short of the 7.6% annual reductions the United Nations has said are necessary over the next decade to hold the global temperature rise to below 1.5 degrees Celsius.

Scientists have sought to reject claims that emissions reductions associated with the coronavirus are a silver lining. Carbon dioxide is a long-lived gas capable of staying in the atmosphere for up to a century, meaning a temporary drop in emissions is unlikely to change the world’s climate trajectory.

“The magnitude of reductions has to be similar, but it has to persist over time, and it can’t be as disruptive as this has been,” said Steven Davis, an earth scientist at the University of California, Irvine, who did not participate in the study.

History suggests that temporary drops in emissions associated with recessions are easily offset by economic rebounds. Emissions rebounded by 5% in 2010, as the world dug its way out of the Great Recession.

That trend is already starting to show signs of repeating itself.

In China, where daily emissions fell by almost a quarter at the height of the pandemic in February, CO2 levels returned to pre-pandemic levels by the end of April. And oil demand in the United States and Europe has crept up in recent weeks, as both regions begin to emerge from lockdown.

Governments will need to employ green stimulus, or investments designed to clean up power generation, transportation and buildings, in order to revive the economy and prevent a return to pre-pandemic emission levels, said Megan Mahajan, a policy analyst at Energy Innovation, a research firm unaffiliated with the study.

“I think what this really shows is that in order to meet the sort of ambitious decarbonization targets, we need really large structural shifts in our energy system,” she said.

The world’s emissions trajectory depends on how the pandemic unfolds. In the first phase of the virus, emission reductions were driven by stay-at-home orders and other restrictions intended to halt its spread. Those orders resulted in steep declines in transportation emissions. Surface transport and aviation accounted for 53% of the emission reductions recorded on April 7.

Those figures show how unusual this pandemic is. Past recessions have pushed emissions temporarily lower. But those decreases typically occur in the industrial sector, which has seen CO2 levels fall at a lower level than transportation during the pandemic.

It is unclear whether that dynamic will continue. Lockdowns may persist throughout parts of the world for the remainder of 2020. Some 700,000 people in China, where the virus had been contained, were recently locked down to combat a new outbreak. And people may be reluctant to travel even in places where restrictions are eased.

Yet industry is likely to suffer more as the downturn persists. U.S. steel manufacturing is already down by one-third, Jackson noted.

“As drastic as the cuts have been in the last few months, they won’t have enormous effect unless a recession continues or some of the policies put in place continue. So I think long-term, the economic effects of COVID will be greater than the sheltering effects on emissions,” Jackson said. “A year or two from now, it mostly will be about what the economy does, not what sheltering in place did.”