Two UCI alumni donate $25,000 to advance research into something no-one has ever seen before
Lucas Joel
UCI Physical Sciences Communications 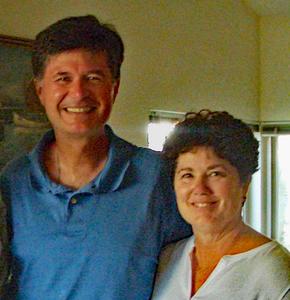 Inspiration is a wind that can kindle a fire. That wind stirred on October 29, 2019 in the Pacific Ballroom at the UCI Student Center as Professor Jonathan Feng gave a talk as part of the School of Physical Sciences’ Breakfast Lecture Series. It stirred as Nancy and Corwin Evans, both UCI alumni who read about Feng’s talk in an email, listened to Feng describe something called dark matter.

Dark matter’s an enigma. Physicists like Feng know that everything that humans can see, from the sand at the beach to the sun and the moon and the billions of stars in our Milky Way galaxy, make up only 15 percent of the matter that exists in the universe. The rest of it — 85 percent of all that is — is invisible dark matter.

“We’re surrounded by a sea of stuff, and we don’t even know it’s there,” Feng said during his lecture.

“Dr. Feng did an outstanding presentation,” Corwin Evans says. “It really brought people in, and described it in such a way that everyone could understand.”

“The information was approachable, regardless of level,” says Nancy Evans.

Feng finished his lecture by describing a project he and his research group launched to, among other things, detect dark matter — something no-one’s ever done before.

No-one’s ever detected dark matter, but we know it’s there because without it — and without the gravitational effects that it has on everything else — the stars that comprise the Milky Way would not be moving through space as fast as they are.

Still, dark matter’s invisible. It doesn’t absorb, reflect or emit light like everything else does, which makes detecting it a bit like trying to see the wind.

In France and Switzerland, they’re trying to see the wind at a place called the European Organization for Nuclear Research, or CERN, where there’s an underground machine called the Large Hadron Collider, or LHC. LHC cost billions of dollars to build, it fills a circular tunnel roughly 17 miles long, and it, along with a six-story-tall particle detector, are part of CERN’s efforts to detect dark matter.

So far, CERN has not had any luck — but Feng thinks he can find dark matter a different way. He and his team are building a particle detector at CERN that, rather than being building-sized and requiring billions to build, will be small enough to fit on a table, will be relatively inexpensive, and could be sensitive enough to detect dark matter.

Feng’s lecture ended, and Nancy and Corwin Evans turned to one other.

“That’s exactly what I was thinking,” Corwin Evans told her. “Just the whole idea of such a unique experiment. You could do it on your tabletop.”

“We have this rule in our marriage that if we both look at something and like it, we should probably do it,” Nancy Evans says.

The two went to Feng after his talk and said that they wanted to know where their money might go if they were to support his research. Feng told them that he wanted to send one of his new graduate students, Savannah Shively, who grew up in southern California, to CERN so she could help get the project running. The next several months, he said, were going to be a critical time for his team because they needed their detector to be operational by summer of the following year.

The next day the Evans’s called the School of Physical Sciences and said they wanted to donate $25,000 to support Feng’s work.

“That was the most expensive breakfast that we ever had,” says Nancy Evans, laughing.

The Evans’s met at UCI in 1972. Corwin Evans was leaving a movie theater with friends, and Nancy Evans was going to the same theater, also with friends. The two didn’t know each other, but the friends they were with knew each other, and they met when the two groups collided. The following year Corwin Evans got his bachelor’s in Biological Sciences, and in 1974 Nancy Evans finished two degrees: one in mathematics and the other in social sciences. Nancy Evans returned to UCI to get a master’s in math, Corwin Evans went to UCLA to get his dental degree and then to USC for his periodontal specialty training. Later, he worked as a periodontist at UCI for 19 years.

“We’re very different in our interests,” Nancy Evans says. “I’m interested in math, definitely. Math math. Puzzles and gardening. Nature. Nature you and I both like.”

“He’s always interested in science, period,” says Nancy Evans. “Astronomy or astrophysics have always been interesting to you.”

“Any lectures that come up at UCI, I’m always interested in,” Corwin Evans says.

Nancy Evans taught math at community colleges in Orange County for 27 years. She taught at Irvine Valley College, where she won the “Teacher of the Year” award in 1996.

Savannah Shively, Dr. Feng’s graduate student, went to Irvine Valley College before transferring to UCI to finish her undergraduate education. In February, Shively moved to Thoiry, France to help build Feng’s detector at CERN. She’d never been overseas before, and now she’ll be hunting dark matter in France for about a year, all thanks to the Evans’s gift.

Now, she gets to “participate in building this thing that might change physics as we understand it,” Shively says.

The night the Evans’s met in 1972, the two went to see the same movie, Catch-22. Something made them both want to go to the film, which played at what was the campus’s only movie theater inside what is now Schneiderman Lecture Hall. Then, 48 years later at the Pacific Ballroom, something made them both want to help UCI illuminate the dark universe.

Now, the two want to know what Feng and his group discover next.

“It’s made us feel like we’re more a part of the UCI Physical Sciences family,” Corwin Evans says.