For Roger McWilliams, it was about joy

McWilliams has anteater blood coursing through his veins, and he successfully turned a noun into an adjective. But those aren't the most important things.
Lucas Joel
UCI Physical Sciences Communications 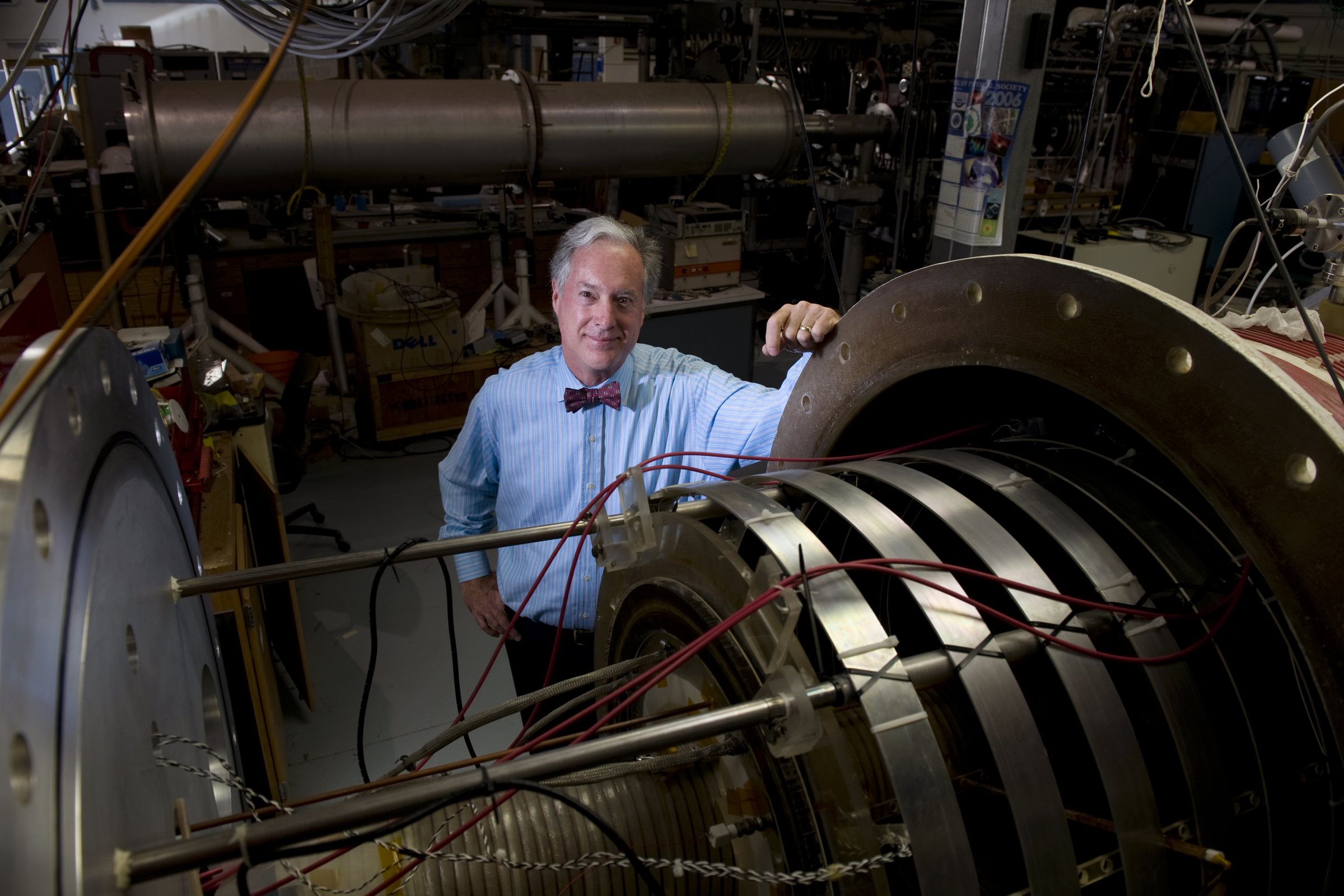 There’s a secret at the UC Irvine School of Physical Sciences. The secret is at the Infinity Fountain, which sits outside Rowland and Reines Halls and in front of Aldrich Park, and which is where water splashes the figure eight infinity symbol into a shallow blue pool.

But that’s not the secret. The secret is on the side of the fountain that faces the stairs that climb to Rowland and Reines Halls. There, you’ll see a square spot in the concrete that looks a bit different than the surrounding concrete. In that spot, there used to be a plaque, and the plaque, while it corroded and is now gone, read, in part: Alvin Randall Edgar, Margaret Edgar McWilliams, Generations in the Professoriate.

Margaret McWilliams is in her early 90s. She’s a violinist, and she’s the mother of a man whose name is as much a part of the story of the School of Physical Sciences as Rowland or Reines. “Roger McWilliams is the most UCI physics professor that we have,” said Tim Tait, professor and chair in the Department of Physics & Astronomy. “He’s UCI through-and-through.”

McWilliams, who retired in June after 40 years as a professor of physics and five years as Associate Dean of Research and Graduate Studies at the School of Physical Sciences, would agree. “I think I have anteater blood in me,” McWilliams said while sitting in front of a computer screen during a Zoom call inside his garage at his University Hills home. Behind him sat an old black Jaguar, and above the garage door a sign read “Roger’s Garage.”

McWilliams has anteater blood in him, and he’s made it to the point where the people who know him think the best adjective to describe him is “UCI.” But for McWilliams, there’s another term that he thinks forms the main thread that weaves itself within and without his 40 years at UCI: joy. “I think the story is one of continuous joy, and never being bored in trying to help people use science for fundamental knowledge, and also for applications useful to society,” McWilliams said. “The joy of physics in part is that a curious mind will never be bored.”

That joy born from curiosity goes back decades. McWilliams, born in Iowa, moved with his family to California in the 1960s. He grew up in Fullerton, and when he was 16 he got his driver’s license. He loved the freedom that driving a car gave, but there was a problem: he didn’t have a car. “My dad, when I got my license, he said ‘do you want to drive a car?’” recalled McWilliams. “And I said, ‘yeah, I would love to!’” So, the two went to his dad’s friend’s place, and they bought a car from him.

But then there was another problem: the car didn’t run. The two towed the car home with a rope, and his dad told him: “‘there’s your car. You fix it, you make it work and that’s your transportation.’” His dad gave him some tools to fix the car, and McWilliams started tinkering. “Working with the hands is cathartic,” he said.

McWilliams tinkered with the car — a Jaguar Mark 5, just like the one that now sits in his garage — and he fixed it. And after that, he never stopped tinkering; over the years he tinkered with everything from that first Jaguar to an army-style Willys Jeep. “He has owned virtually every kind of car that you can imagine,” said McWilliams’ former graduate student Daniel Sheehan, who’s now a physics professor at the University of San Diego. McWilliams doesn’t buy cars simply to own them, Sheehan explained. He loves to experiment with them, like the time he put pure benzene in his car instead of gasoline, “which would end up almost melting the engine,” Sheehan said.

“He’s very much a hands-on, hardware type of person,” said physics professor Bill Heidbrink, who spent years co-advising students alongside McWilliams. “It’s always been important to him that physics be an empirical science,” Heidbrink said.

Thomas Roche, one of McWilliams’ and Heidbrink’s former students and a plasma physicist who earned his Ph.D. in 2012, remembers coming into the lab one day and finding McWilliams tinkering with one of his Jaguar engines, which he stored in his lab. “‘The science that you’re doing should not be your whole life,” Roche recalled McWilliams teaching him. “You should have a broader perspective.”

Roche thinks that that broader perspective was at work when McWilliams, for a research project, used an unlikely tool: chicken breasts. The aim was to figure out a way to use plasma — or superheated gas — to cauterize a wound that a human might have, and McWilliams thought that the best thing to start blasting with plasma would be a chicken. “He had these chicken breasts in the lab, and he would score it with this cauterizer, evaporating all this chicken into the atmosphere.” That experiment worked, and so did many others, like the work that McWilliams did on lasers that made the fiber-optic communication cables that link places like the U.S. and Japan possible.

Sheehan said that he thought of McWilliams as an older brother. While only five years apart in age, Sheehan called McWilliams “Dr. McWilliams” until the day he got his Ph.D. in 1987. Sheehan looked up to McWilliams, who he said could come across as gruff, but who is not that way, because he “has, in many ways, a poet’s heart,” and he’s a “gentle soul,” said Sheehan, who explained that McWilliams was the one who inspired him — and then taught him — to wear bow ties. “Bow ties are just kind of happy,” he said.

Sheehan described how, about twenty years ago, McWilliams wanted to learn to play the saxophone. So, he did. He now plays the tenor and soprano saxophones, and he played in a UCI group called The Interactions Jazz Ensemble, which would play all over campus, including gigs outside the Anthill, and they would play at weddings and at bar mitzvahs around Orange County. Sheehan said that McWilliams was the kind of person who, once he decided he wanted to pursue something, he pursued it — a quality Sheehan thinks helps explains the great diversity that defines McWilliams’ career. At one turn McWilliams will be driving an Aston Martin and serving a four-course premier dinner, and at the next he’ll be revving his Willys Jeep up rutted roads out at UCI’s Steele/Burnand Anza-Borrego Desert Research Center and cooking a steer’s head in an oven “with the brains and the tongue intact,” Sheehan said.

McWilliams is “somebody who is swallowing life whole,” Sheehan said, which is what made McWilliams the perfect person to be founding director of the UCI Campuswide Honors Program. The program gives undergraduates the chance to have an intimate, liberal arts education in the context of a major research university, and McWilliams was perfect for it because, for him, being a student isn’t just about striking out on a path that leads to a career — it’s about getting your hands dirty and experiencing life in all its dimensions. He would take honors students with him to Anza-Borrego so they could experience nature and connect each other as human beings, and not just as faces in a classroom. “Many students from city environments have never seen the Milky Way,” McWilliams said. “I think that I encouraged students to see science in the world around them, and peeling them out of the classroom and putting them into the world is a very important part of teaching science.”

When Sheehan first met him, McWilliams drove an Aston Martin. Now, though, McWilliams drives and tinkers with the same model car that he first towed home with his father when he was 16 — a Jaguar Mark 5. Whatever kind of car is in Roger’s Garage, though, “if you’re going to the end of the world — in other words, driving to the end of the world, he’s the kind of guy you want on your side,” Sheehan said. “Because he has lots of knowledge, lots of talent, self-confidence, culture, and would get through it.”

McWilliams may not take his saxes along for that ultimate car ride. He’d love to, but he now has arthritis in his jaw, and playing can be too painful for him. “But, you know, if I’ve worn out some body parts by having a good use of them, and very rewarding use of them, I’m fine with that,” he said.