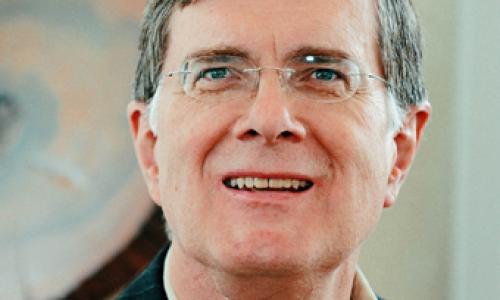 Dr. Prather's career began in astrophysics and then moved to Earth and planetary atmospheres, where currently his research group integrates global modeling with measurements of the composition and chemistry of our atmosphere. He is currently deputy principal investigator on a 5-year $30M NASA aircraft mission that will measure the chemical reactivity of the atmosphere while circumnavigating the globe over 4 seasons.  His paper identifying the potential environmental threat posed by the new technology gas NF3 was cited by Foreign Policy magazine as a top-ten hidden story of 2008. Prather has published numerous papers and has been lead author on international assessments of ozone depletion and climate change since 1985. He has been active in the Intergovernmental Panel on Climate Change (IPCC) assessments since 1992 and participated on the scoping and authoring of the 2014 IPCC 5th Assessment Report.

As a Jefferson Science Fellow at the U.S. State Department (2005-6), Prather worked with the policy and intelligence communities on emerging issues in science and the environment. Among his many accolades, Prather has been elected Fellow of AGU and AAAS, was awarded the 2015 Haagen-Smit Clean Air Award for his climate research in support of California's greenhouse gas polices, and is foreign member of the Norwegian Academy of Science and Letters. Prather founded and directed the UCI Environment Institute (2008-2013) which initiated cross-campus research on sustainability science.  Recently, Dr. Prather was named UCI Distinguished Professor. He has served on various panels of the National Academy of Sciences.

Dr. Prather is a founding faculty member of UCl's Department of Earth System Science (ESS), and served as the Fred Kavli Chair from 2002-2013. Established in 1991, the Department was largely the vision of Professor and UCI Chancellor Emeritus Ralph Cicerone, past-president of the National Academy of Sciences. The first interdisciplinary department worldwide created and designed to study the Earth as a system, ESS consistently receives top rankings for excellence in research and graduate education.

Prather studies what makes the climate tick the way it does by, among other things, making models of how different gases move about the atmosphere.
fprofile_ldap_buzz
Atmosphere