An experiment on the UCI campus seeks to understand the harmful gases and particles that emit from car and truck brakes.
Lucas Van Wyk Joel
UCI Physical Sciences Communications 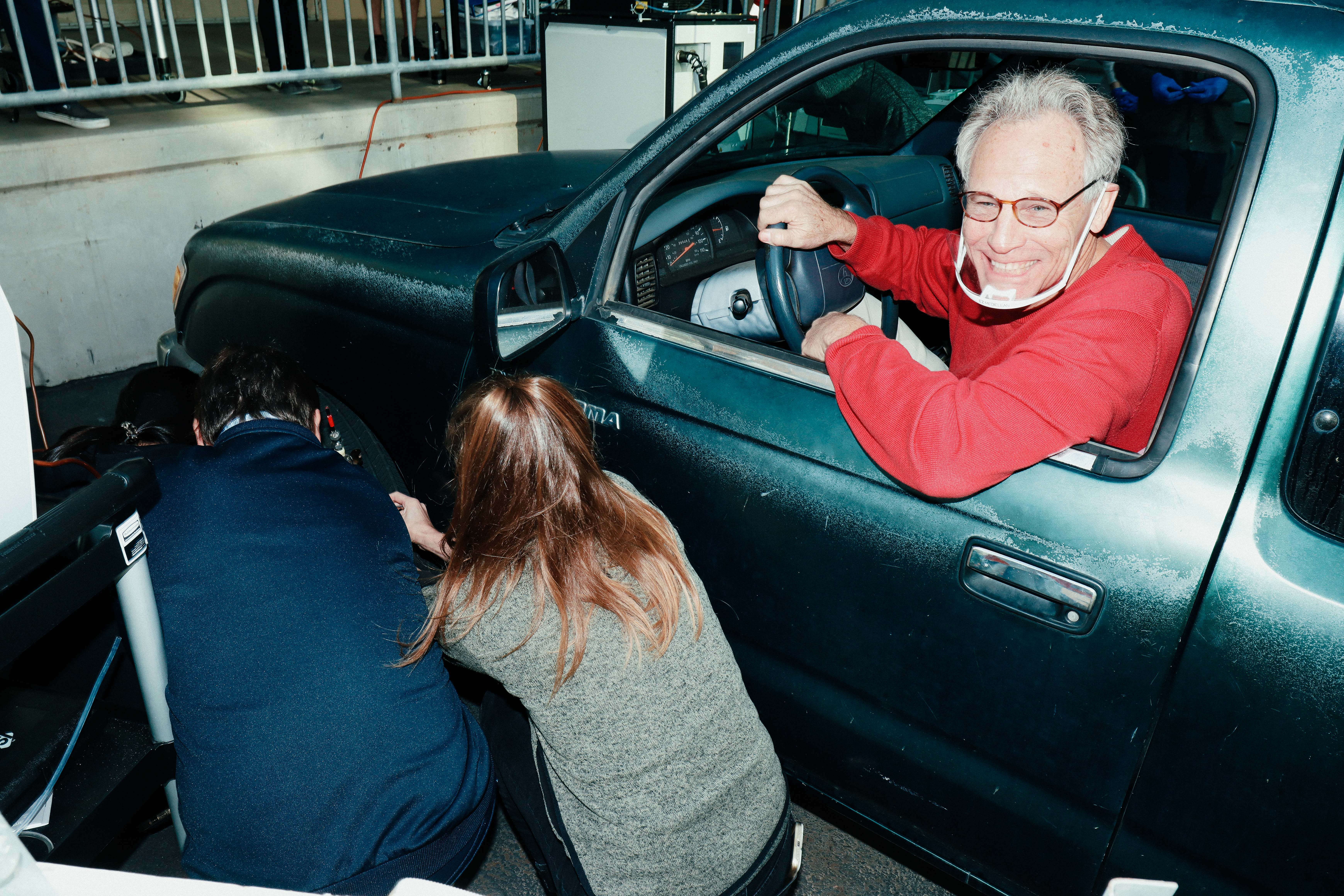 Professor Don Blake of the Rowland-Blake lab in the UCI Department of Chemistry grins after peeling into Rowland Hall's loading dock, where fellow scientists huddled around his Toyota Tacoma's tires so they could take air samples.

Last Friday, in the shadow of Rowland Hall at the University of California, Irvine, at that building’s loading dock, researchers from the UCI Department of Chemistry, Department of Earth System Science (ESS) and UCI Social Sciences huddled around a 21-year-old Toyota Tacoma. Behind the wheel of the truck was Professor Don Blake — an atmospheric chemist renowned for his research into concentrations of greenhouse gases in the atmosphere like methane. His plan: back the truck up to UCI’s Ring Road, which abuts Rowland Hall, rev the engine and ride the brakes back to Rowland Hall’s loading dock where fellow scientists would then measure the air around the tires with the aim of sampling the gases and particles emitted by the brakes.

“Our hypothesis is that the emissions from brakes and tires could be affecting people’s health,” Blake said just before climbing into the Tacoma. “The goal is to see if we can somehow identify gases and particles that are harmful to people.”

Brake emissions, according to UCI atmospheric chemist Professor Barbara Finlayson-Pitts, are something agencies like the California Air Resources Board are taking note of as a public health issue because some of the things that brakes can emit, like polycyclic aromatic hydrocarbons, are carcinogenic. “CARB is funding research on this,” Finlayson-Pitts said. “While there have been a number of measurements of particle emissions from brakes and tires, much less is known about the gases that are emitted and how they go on to react in air.” Additionally, the California Department of Justice is funding the UCI research from fines levied on Volkswagen for a 2015 emissions cheating scandal, which saw the German car manufacturer illegally bypass emissions standards set by the Environmental Protection Agency.

California cities like Santa Ana here in Orange County suffer from particularly high levels of air pollution from all the highways that crisscross the region, and scientists know very little about how much of that pollution comes from brakes. “We have some of the worst air quality not only in the county but in the state of California,” said Leonel Flores, who's the Community Organizer for Getting Residents Engaged in Empowering Neighborhoods (GREEN), a community-driven non-profit in Santa Ana's Madison Park neighborhood. “Hopefully this study helps us identify what might be harming us.”

Measuring brake emissions like this collaboration did at UCI, as a lead-in to understanding impacts — including health effects — on a local community in need of environmental justice, is something that’s never been done in the chemistry community. “It’s a pretty big milestone for us,” Finlayson-Pitts said.

And the milestone happened at Rowland Hall, as Blake revved the engine and let the brakes squeal as he drove into the loading dock with a grin on his face, and teams of scientists, like a NASCAR pit crew, swarmed around the tires with their instruments, paving a new avenue of research in the process.