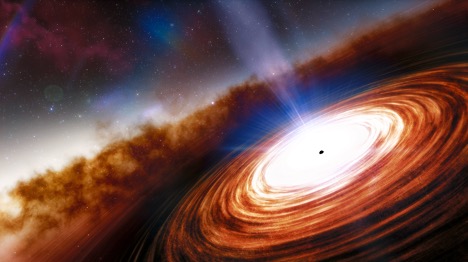 An artist’s impression of quasar J0313-1806 shows the supermassive black hole and the extremely high-velocity wind. The quasar, seen just 670 million years after the Big Bang, is 1,000 times more luminous than the Milky Way and is powered by the earliest known supermassive black hole, which weighs 1.6 billion times the sun’s mass.

Named J0313-1806, the object is 1,000 times more luminous than the Milky Way, and the black hole from which it emanates is 1.6 billion times more massive than the sun. The researchers, led by astronomers from the University of Arizona, used data from an assortment of resources – including the UKIRT, W.M. Keck and Gemini observatories atop the Mauna Kea peak in Hawaii and the Pan-STARRS1 survey telescope on Maui – to discern the redshift, mass and other characteristics of the quasar and its black hole. The team’s results, included in a paper in The Astrophysical Journal Letters, were shared today in a panel discussion at the American Astronomical Society’s January 2021 meeting. “Measurement of spectral lines that originate from gas surrounding the quasar’s accretion disk allows us to determine the black hole’s mass and study how its rapid growth influences its environment,” said co-author Aaron Barth, UCI professor of physics & astronomy, who led the Keck component of the multi-observatory effort. Using spectroscopic observations from Keck and Gemini North, the astronomers uncovered a high-velocity wind traveling away from the black hole at 20 percent of the speed of light. The quasar’s cosmological redshift is 7.64, meaning that we observe light that left the quasar when the universe was just 670 million years old. Said Barth: “It’s astounding that quasars were able to grow to such large masses so rapidly, and J0313-1806 takes us one step closer to witnessing the earliest history of the largest black holes in the universe.”