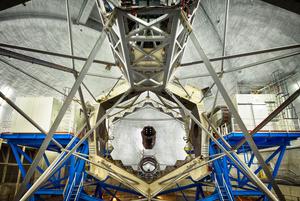 The 36 hexagonal mirror segments of one of the Keck telescopes. If there was ever a problem with the mirrors’ alignment, Gary Chanan was the one people called.

The two W.M. Keck Observatory telescopes sit inside domes perched atop Hawaii’s dormant Mauna Kea volcano. Run by the University of California and Caltech, these telescopes help astronomers and other scientists discover things like planets orbiting other stars, or measure the acceleration of the expansion of the universe. Gary Chanan, Professor Emeritus in the UCI Department of Physics & Astronomy, has won the Yale 2020 Award for Advancement of Basic and Applied Science for the work he did making discoveries like these possible.

Chanan isn’t one of the scientists who uses the Keck telescopes to scan for the wonders in the night sky. Instead, his work involves ensuring the 36 hexagonal segments that form each of the two telescopes’ primary mirrors are properly aligned, and it’s for this that Chanan got the award. “I help to design and build telescopes; I don’t look through them,” Chanan said.

Chanan helped design the system that keeps the mirrors aligned alongside his late colleagues Jerry Nelson and Terry Mast, both of UC Santa Cruz. Nelson was the one pioneered the segmented mirror idea because it helped reduce the telescope’s weight; a telescope mirror made of 36 segments, Chanan explained, will be 36 times thinner than if it were made of just one giant piece of glass.

Chanan’s one of the few people in the world who know how to fix a segmented mirror telescope when something goes awry, and having such expert knowledge means Chanan was the scientist others would call if there was ever a problem at Keck. Chanan was virtually always on call, and since astronomers use the telescopes at night, he would get emergency calls in the small hours of the morning, and one common issue the Keck telescope operator would call about would be fuzzy or multiple images of stars.

“If there’s something wrong with your glasses, or you have a concussion or something, you’ll see double,” Chanan said. “For a 36-segment telescope, if it’s not aligned properly — I don’t know what the adjective is, but you’ll see 36 images.”

The Keck telescopes are 10 meters long, but if its mirrors don’t align properly, then the resolution of the images the telescopes retrieve will only be about as good as images that come from just one of the less-than-two-meter-diameter mirror segments. “That’s a huge difference,” Chanan said. “The alignment that I have been responsible for makes the limiting resolution of the telescope six times better than it would otherwise be. That’s equivalent to the difference between being able to see just the first two lines of the eye chart and having 20/20 vision.”

Because of his expertise, Chanan has served as a consultant to a variety of telescopes and observatories around the world, including the Hobby-Eberly Telescope in Texas, the Southern Africa Large Telescope, the Gran Telescopio Canarias in the Canary Islands, the European Southern Observatory, and the soon-to-launch James Webb Space Telescope.

Chanan’s work is also informing the construction of the Thirty Meter Telescope (TMT) — a telescope that, when finished, would use 492 mirror segments. But Chanan will not be on-call for that telescope. Instead, one of this former graduate students, Mitchell Troy, now at the Jet Propulsion Laboratory, will take on that role.

“I was honored to receive all those phone calls from Keck,” said Chanan. “But my phone won’t ring in the middle of the night for TMT. Part of me will miss it, but on the other hand I’ll sleep better.”