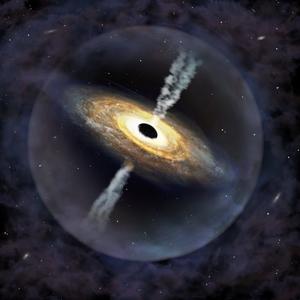 Pōniuāʻena is the indigenous Hawai’ian name given to the second-most distant quasar ever discovered.

Using three observatories on Maunakea in Hawaiʻi, astronomers at the University of Arizona have discovered the second-most distant quasar ever found. As part of an international effort to confirm and study the newly discovered object, a team at UCI and UC Santa Barbara used the Keck II 10-meter telescope to perform a spectroscopic analysis. The Keck observations at infrared wavelengths made it possible to determine the mass of the black hole powering the quasar (1.5 billion times more massive than our Sun) and to study the intergalactic gas that surrounds it. The findings are the subject of a paper published today in The Astrophysical Journal Letters. “This is only the second quasar yet detected at a cosmological redshift greater than 7.5, and it hosts a black hole twice as large as the other quasar known in the same era in the early universe,” said co-author Aaron Barth, UCI professor of physics & astronomy. The light from the object has taken about 13 billion years to reach Earth, so what we observe now shows us the quasar’s properties as they were just 700 million years after the Big Bang. Because it was discovered using data from telescopes in Hawaiʻi, the quasar was given an indigenous Hawaiian name, Pōniuāʻena, which means “unseen spinning source of creation, surrounded with brilliance.” Its discovery is a “big step” toward more fully understanding the formation of supermassive black holes and galaxies in the early universe, according to a Keck Observatory announcement.