Seeing cancer with a camera 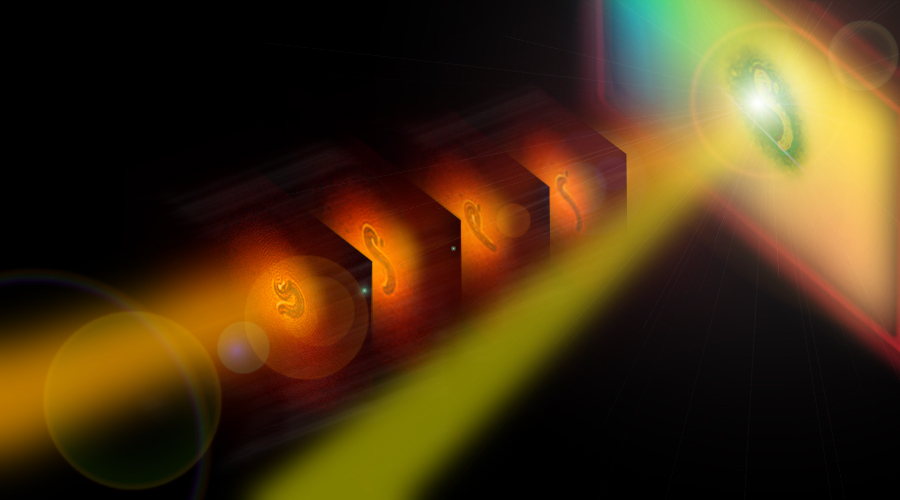 An illustration depicting two beams of infrared light striking a cheap silicon-based camera sensor. The energy from both beams creates enough of a charge for the sensor to make infrared images of different materials.

There’s the light we can see — the violets, blues, yellows, oranges and reds that combine and shine to give definition to everything around us — and then there’s the light we can’t see, like infrared (IR) light. There’re cameras that let you see infrared light, but they have shortcomings and can cost upwards of half a million dollars. Recently, though, a team of researchers from the UCI Department of Chemistry published research in the Nature journal Light: Science & Applications describing a new sensor that dramatically reduces the cost of IR cameras — a leap forward for chemical imaging that stands to help doctors make, among other things, faster cancer diagnoses.

The new sensor comes from an old one: using charge-coupled devices (CCDs) — silicon sensors that’re in many of today’s digital cameras and which cost relatively little to make — Fishman and his team were able to detect light in the mid-infrared range (MIR). “Silicon-based sensors are not sensitive to the MIR,” said Eric Potma, a physical chemist and a professor in the Department of Chemistry and an author on the new paper. But after supplying the CCD sensors with a little extra energy provided by a beam of light, the team discovered they could use the sensors to make infrared images. “Nobody expected the silicon camera to be of any use for the MIR,” Potma said. “It’s a remarkable feat — it’s completely unexpected.”

Researchers sometimes call the MIR spectral range the “molecular fingerprint” region, because many molecules have characteristic vibrational resonances that only happen in the MIR. This means that, with the team’s new sensors, scientists can capture images that show contrasts in the chemical composition of a subject; this has many applications, including in biomedical imaging. “You can see the difference between diseased and healthy tissue,” Potma said. The cameras can spot cancerous tissues, for instance, which could one day help doctors who previously didn’t have access to expensive MIR equipment make faster diagnoses.

“The approach is simple, and will allow IR imaging in most optical labs utilizing existent infrastructure,” said Dmitry Fishman, a physicist in the Department of Chemistry

and a co-author of the paper who now wants to try using more modern cameras to increase the image quality of his team’s MIR images. “Moreover, optimizing the MIR light source will boost the imaging performance even more. We are currently working on both these fronts to get our technique into the hands of imaging experts in the field.”

In the Media
Chemistry