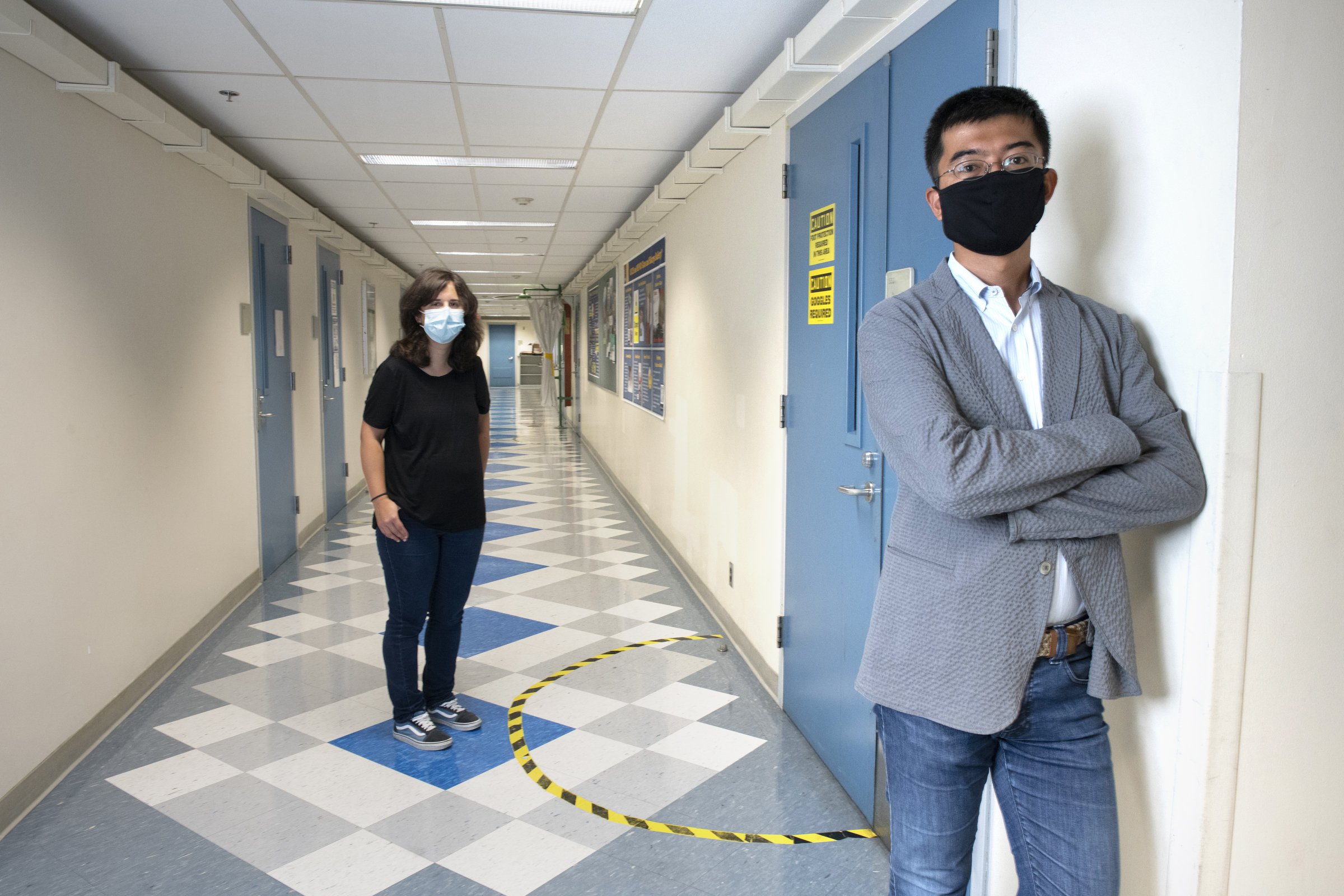 Manabu Shiraiwa (right), UCI associate professor of chemistry, is principal investigator on the Modelling Consortium for Chemistry of Indoor Environments, a 6½-year, $3 million initiative that began in 2017 and recently was granted renewed funding from the Alfred P. Sloan Foundation. Here, he and project scientist Pascale Lakey practice social distancing in Rowland Hall.

UCI atmospheric chemist Manabu Shiraiwa says he has appreciated the cleaner skies over many cities during this year’s coronavirus lockdown, but he’s more concerned about air quality where people spend most of their time: at home.

“Average life expectancy in the United States is 79, but people are inside 70 of those years and outside only about four,” he says. “If you want to understand the health impacts of air quality, you have to look at what’s going on in houses and buildings. And it’s particularly important during this pandemic situation, as many people are now in their homes closer to 24/7.”

Shiraiwa, an associate professor of chemistry, is principal investigator on the Modelling Consortium for Chemistry of Indoor Environments, a 6½-year, $3 million initiative that began in 2017 and recently was granted renewed funding from the Alfred P. Sloan Foundation.

MOCCIE, which commences the last of three phases in December, is a unique effort in which Shiraiwa and his team at UCI coordinate the work of experimentalists and modelers at research institutions around the world to make steady gains in the knowledge and understanding of indoor air chemistry.

Research by MOCCIE scientists has had some definite real-world impact. Earlier this year, the journal Environmental Science & Technology published a study by the group with some relevance to people employing strong detergents to disinfect surfaces against the coronavirus. That’s not a bad thing, according to Shiraiwa, but he wants the public to be aware that use of chlorine-based cleaning agents can generate such toxic gases as nitrogen trichloride and hypochlorous acid, strong oxidants that can defeat the body’s natural defenses.

The chemists also focused on the interactions of ozone with human skin and squalene, a double-bonded lipid therein that helps protect people from ozone and other toxic gases. In addition, they explored connections among personal hygiene, clothing and indoor air.

“Even if you are exposed to high levels of ozone, you may be protected thanks to clothing and skin oil, but some of the disinfectant products are known as skin and respiratory irritants and can be harmful,” Shiraiwa says.

“For our May 2019 study in the Nature journal Communications Chemistry, we found that if you wear the same clothes every day and that clothing is soiled, it contains a lot of your squalene, so you are actually very reactive,” he says. “If you’re then exposed to ozone, you can generate toxic gases all by yourself. There’s a cloud of pollutants surrounding you, and you might also put your peers at risk of exposure to pollutants.”

Airplane cabins – especially those on cut-rate airlines that employ less-than-optimal ventilation systems to remove ozone – can have very high ozone concentrations and are particularly susceptible to the confluence of human and atmospheric pollutants, Shiraiwa says.

These sorts of projects exemplify the depth and breadth of the MOCCIE approach.

On the smaller scale, researchers such as those led by Douglas Tobias, UCI professor and chair of chemistry, conduct molecular dynamics simulations to understand how certain compounds interact with surfaces or, in the case of clothing, fabric fibers. UCI chemists in the Shiraiwa lab group created a kinetic model for the interactions of ozone with skin and clothing to bridge molecular dynamics and computational fluid dynamics simulations. Pascale Lakey / UCI

Shiraiwa’s subgroup works on kinetic modeling to learn how long it takes for chemical reactions to occur, while scientists from other institutions – Pennsylvania State University among them – are contributing their expertise in fluid dynamics to characterize how the body temperature of someone sitting in a chair differs from the temperature in the surrounding room and how that, in turn, determines the way polluted air circulates.

“We know how ozone reacts with skin. The question we sought to answer – and ultimately did through experimentation and modeling – was how fast secondary pollutants are generated, which we now know varies from minutes to hours,” Shiraiwa says.

“You couldn’t get the insights we’re gaining through experimentation alone,” Tobias adds. “You need modeling to understand how the chemistry will have an impact in the real world. By having all of these different teams consolidate their results in a central hub here at UCI, we’re able to resolve a wide range of questions.”

Shiraiwa says another area of concern for his group is how chemicals react with countertops, walls and ceilings in houses.

“People used to think that there’s not much chemistry happening on indoor surfaces because usually the oxidant concentration inside is low,” he says. “But that’s not entirely true. Many pollutants can actually stick to walls and other surfaces, and once they’re stuck, they can react with indoor air and result in the emission of secondary gases or particles that could be harmful.”

For example, a burned batch of popcorn or an overcooked steak can release black carbon, or soot, into the kitchen and adjacent spaces. These particles often contain polycyclic aromatic hydrocarbons, which are toxic and carcinogenic. People customarily clean work surfaces but seldom take the time to clean walls and ceilings, which, in the presence of ozone, could become sources of future emissions. A study by MOCCIE scientists published last year in showed that the fate of toxic compounds indoors can be controlled by the chemistry on indoor surfaces.

“Ultimately, we’re hoping that our research causes people to think more about routine habits and factors such as ventilation, circulation, and air exchange versus recirculation in rooms,” Shiraiwa says. “This information can inform the design and operation of buildings and lead to real benefits in public health going forward.”