The new fellows research everything from solutions to climate change through chemistry to cancer treatments through mathematical modeling.
UCI Physical Sciences Communications 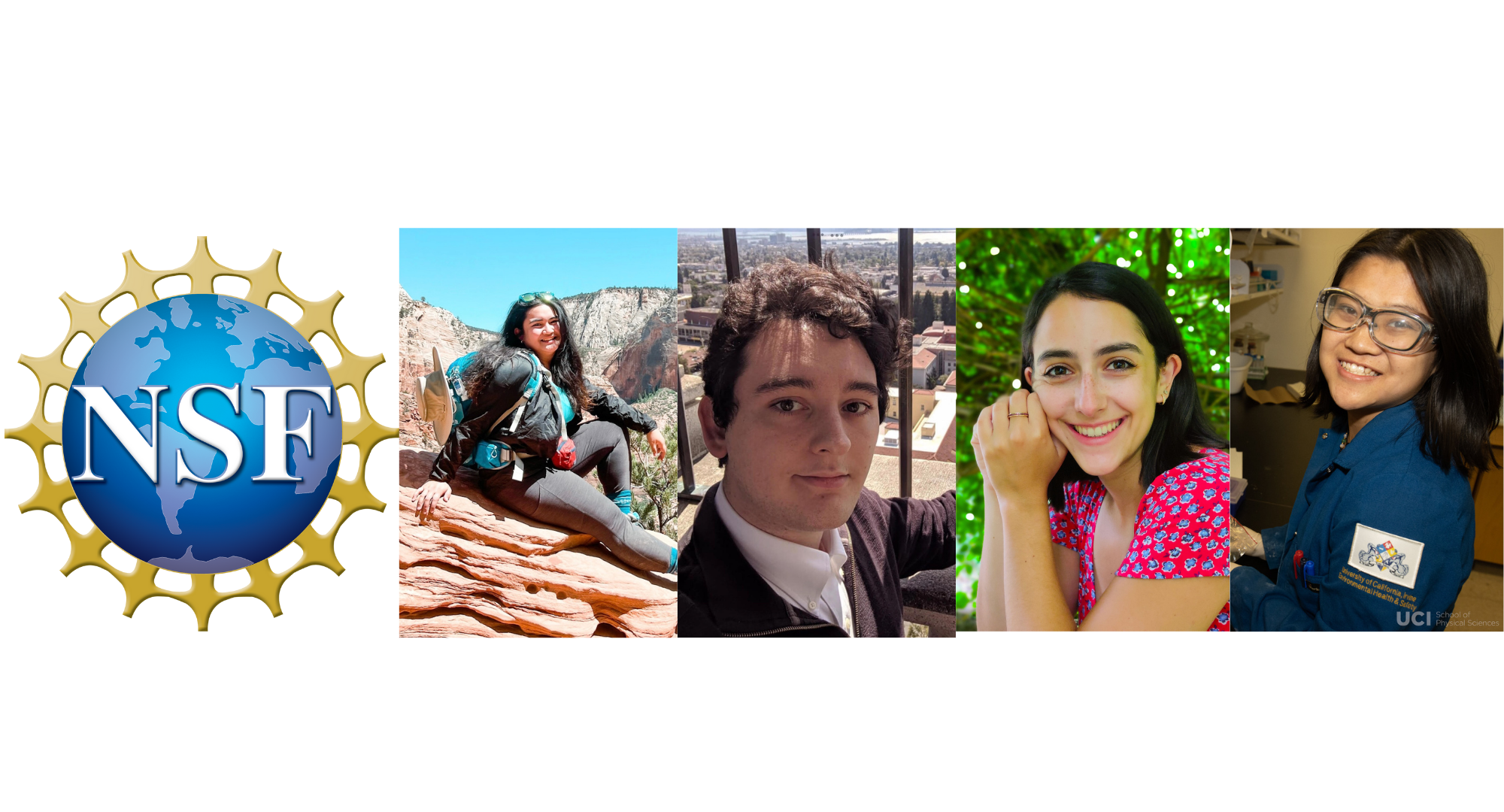 The National Science Foundation’s Graduate Research Fellowship (NSF GRFP) is perhaps the most prized research grant that a graduate student can receive during their career. To get one, a student must compose an application that includes not only a fine-tuned proposal describing what they plan to research, but also a personal statement that talks about who they are and why they should become a fellow. This year, three students from the UCI School of Physical Sciences won an NSF GRFP.

Alexander Vasquez is an incoming Ph.D. student in the UCI Department of Physics & Astronomy, where he plans to concentrate in chemical, applied and materials physics. Vazquez has had an interest in physics and astrophysics for as long as he can remember, and he's following that interest into quantum science research that he hopes will improve the efficiency of solar cell devises — work that could improve solar cell technology used here on Earth as well as in space. A strong proponent of neurodiversity in STEM fields, Vasquez's undergraduate career saw him helping create NASA's Neurodiversity Network (N3) — a program that gives neurodiverse students opportunities for research and mentorship in STEM fields.

Erin Joy Araneta is an undergraduate chemistry major, and she works in the lab of Professor Jenny Yang in the UCI Department of Chemistry. Araneta’s research focuses on how chemistry can help in the transition to greener technologies as the push to decarbonize the global economy continues in the face of climate change. When she’s not working in Yang’s lab, she’s working to lift up those around her, be it through the non-profit she founded to help educate impoverished youth in her native Philippines, or through writing childrens’ books that she hopes will show young girls from historically marginalized groups that they, too, can become scientists if they want. Araneta will be taking her fellowship to the University of Southern California, where she’ll be furthering her environmental chemistry work.

Lucy Yang started at UCI with aims of going to medical school, but, in following that path, she discovered a love for research in the lab of Professor Andrej Luptak where she’s spent the last four years studying RNA. These days, Yang’s studying the role RNA played in the origin of life on Earth billions of years ago — a time when life didn’t yet use DNA as its primary information storage molecule. For her NSF-funded research, which she’ll be starting this fall at Harvard University as a new graduate student, she’ll be working to understand which molecules helped catalyze chemical reactions in that hypothesized “RNA World.”

Rachel Sousa’s a Ph.D. student whose research straddles disciplines; as an NSF fellow, she uses math to model novel treatments for cancer growth in the human body. Sousa never imagined she would end up using math in this way, but thanks to a string of good teachers, including her father, who fostered a love of math in her when she was young, Sousa’s now working in both the Department of Mathematics and the UCI School of Medicine to test cancer treatments on patients in computer simulations. It’s work she’s honing alongside her science communication chops; earlier this year, Sousa won the UCI round of the Grad Slam research communication competition, which saw her travel to and place third in the UC-wide Grad Slam.