The Reionization of Katy Rodriguez Wimberly 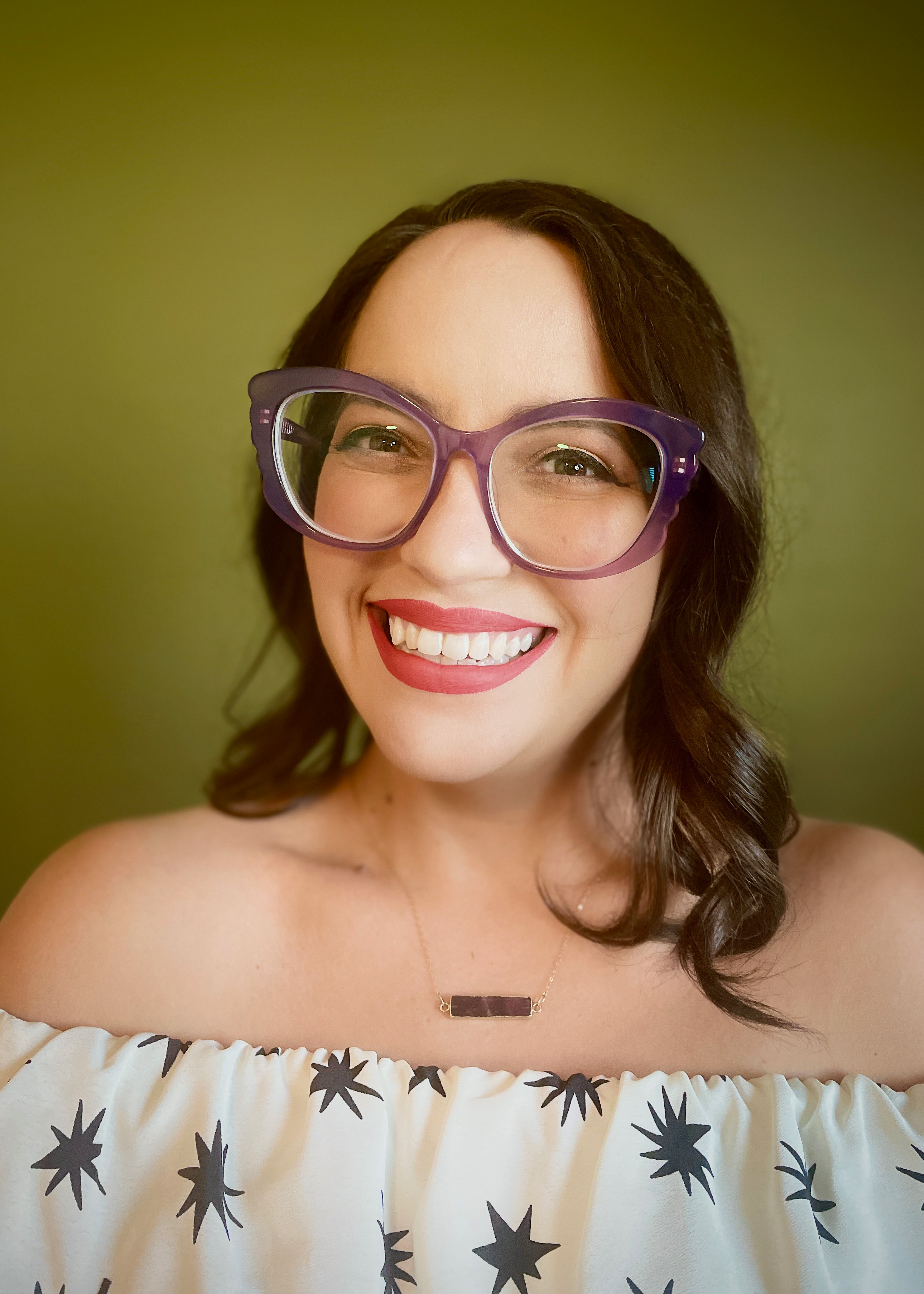 Top: The faint red and blue lights of an ultra-faint galaxy called Horologium I as observed by the Dark Energy Survey uses the Auxiliary Telescopes at the European Space Agency's Paranal Observatory in Chile.

Katy Rodriguez Wimberly will soon have her second child and she and her husband plan to name the child Qora. If a younger version of herself were to travel from the past to today (not as far-fetched a possibility as you might think, considering Rodriguez Wimberly grew up in Southern California’s Hacienda Heights neighborhood, right next to the mall where filming of scenes from the time-travel movie “Back to the Future” happened), she’d grin. That’s because she grew up the youngest of six sisters, with the next youngest 18 years older than her, and she watched her sisters raise their families and “I got to see how happy that made my sisters, and I wanted that my whole life,” she said.

Luckily, us future folk already know the end of the story; Rodriguez Wimberly lived along into her dream of motherhood — and, as she’ll soon be graduating with her Ph.D. in physics from the UCI Department of Physics & Astronomy after working with Professor Michael Cooper and moving on to a position as a postdoctoral researcher at UC Riverside supported by a first-of-its-kind National Science Foundation Mathematical and Physical Sciences Ascending Postdoctoral Research Fellowship, she’s now also another thing she dreamed of becoming long ago: an astrophysicist, one who now studies what may be the oldest known galaxies in the Universe.

But the reality of her story isn’t quite as straightforward as jumping into a modified DeLorean sports car like the main characters in “Back to the Future” and vrooming down the streets of Rodriguez Wimberly’s childhood town and into a tidy future with a family at home and galaxies at work. Instead, in listening to her, what takes shape is a story with at least two parts, with the transition from the first part to the second marking a change that, if there were a name for the whole drama, would be named for the change: “The Reionization of Katy Rodriguez Wimberly.”

“Reionization” refers to a time called the “Epoch of Reionization,” which, starting about 400 million years after the Big Bang and lasting for about 600 million years, is when the Universe started forming the first stars and galaxies. Like getting a second wind after its post-Big Bang sophomore slump, galaxies and stars and their light came to be. If a life is a series of defining moments, some of which give the moments that follow a certain zest — not to mention a different character and almost a new identity — then in the universe that is the story of a life, reionization events can and do happen.

For instance, names. Once, Rodriguez Wimberly’s last name was simply “Rodriguez.” And, once, she didn’t go by “Katy,” she went by “Maria.” But reionization happened. First, it happened when she was born, when her mom wanted to name her “Katy” — but her mom decided “Katy” wouldn’t make for a good first name and so named her “Maria” instead. But her mom still liked “Katy” and so made her middle name “Kathleen” and used “Katy” as a nickname. “Maria” and “Kathleen” were her grandmothers’ names, and when Rodriguez Wimberly met her husband, Kris her name reionized again and resolved into a “Katy Rodriguez Wimberly” state.

Reionization also involves epiphanies. In Rodriguez Wimberly’s pre-reionized world, an epiphany — or the prelude to an epiphany, when the gas of her early stars was still coalescing — happened in Utah when she was 9 years old, out in the middle of a reservoir called Lake Powell. It was there that her family rented a house boat, and at night out on the water her parents told her she was now old enough for something special. They explained that at night she could sleep on the roof of the house boat and watch the stars. It was one of the first times Rodriguez Wimberly remembers connecting with the stars in a way that today seems to be a foreshadowing of what she would do later in life, like a subtle but clear gravitational tug, felt only in hindsight. “I remember around then telling my family, ‘I’m gunna be an astronaut!’” Rodriguez Wimberly said.

The word “astronaut” reionized over time into “mathematician,” then into “actress,” and then, immediately after finishing high school, Rodriguez Wimberly joined the U.S. Army reserve band as a saxophonist, and she was in the band for 12 years and over the years played for thousands of people in places like Panama and, in a military marching band, down main street in Disneyland. She also worked at Disneyland for a time when she was in her early twenties, and it was there at one of their Tomorrowland attractions during her onboarding training that she met someone who worked at a Tomorrowland show named Kris Wimberly — and her stars, including her first child, Zion, were, in hindsight, on their way.

Stars were forming — but there were still confused clouds of gas trying to figure out what they were. “I’m half Latina and half Caucasian,” said Rodriguez Wimberly, who explained that her father — whose own father emigrated from Mexico to Texas, and who grew up in Texas and dropped out of high school to join the marines so he could escape from racial segregation in Texas schools — decided not to teach his children Spanish, even though Rodriguez Wimberly identifies strongly with that part of her heritage. Her father hoped to integrate his kids into white American culture.

“But,” she added, “I was never Mexican enough for the Mexican kids and never white enough for the white kids.” But according to Rodriguez Wimberly the social landscape in Latinx culture has shifted since she was young, and anyone with some Latin or Hispianic descent is, nowadays, “Latin enough,” she said. “Social media has helped a lot with this, and the Chicanx, Latinx and Mixed Race communities on social media platforms have been crucial in helping me feel like I do belong to all my heritages,” which includes Spanish and indegenous Mexican, some African ancestry on her dad’s side, English, French, and, according to a genetic test her sister did, Irish. “Who knew!” Rodriguez Wimberly said.

The star of her cultural identity formed and became clearer, and so, too, did her astrophysicist star. An avid Star Trek fan, Rodriguez Wimberly described watching the character of Captain Katherine Janeway on the “Star Trek: Voyager” TV series, and in Janeway she saw herself: a scientifically-minded, strong woman with her eyes on the stars. Rodriguez Wimberly asked her now ex-boyfriend if studying astrophysics was something one could do professionally. “Yes, totally,” he said.

During the Epoch of Reionization, Rodriguez Wimberly explained, the very first galaxies formed. At least that’s the thought, and whether or not they did is part of what Rodriguez Wimberly’s planning to work out at UCR, where she’ll research “which of the known ultra-faint dwarf galaxies are relics of those first galaxies formed,” she said. These galaxies — known in the astrophysical lexicon as ultra-faint galaxies because their stars, long in the tooth and short on fuel, don’t shine quite as brightly as they used to — are still around, but they’re so dim that astrophysicists like Rodriguez Wimberly can only spot the ones that orbit our own Milky Way galaxy. That’s because other ultra-faint galaxies, though they almost certainly exist, aren’t bright enough for current telescope technology to see them.

But the light from Zoom call with Rodriguez Wimberly was bright enough to reach my eyes, and during the call she changed her Zoom background into an image captured by the Dark Energy Survey — an astronomical survey that uses the Auxiliary Telescopes at the European Southern Observatory’s Paranal Observatory in Chile — showing an ultra-faint galaxy. When I think of the word “galaxy,” my bias is that I imagine photos of proud space-faring monolithic discs spinning through space and commanding the attention of a viewer. This was not that. If a galaxy ever looked like it was asleep with the latest issue of AARP The Magazine covering its face, this was that galaxy. Before me was not a proud disc, but a smattering of tired blue and red lights that looked like what stars look like when you look at them without your glasses — and you’re the kind of person who, like me, really needs your glasses to see stars. Rodriguez Wimberly’s studying ultra-faints, and she wants to help sharpen the definition of what an ultra-faint galaxy is and what it isn’t, with the hope that, with a more clear-cut definition, researchers like her will be able to decide whether or not the stars they’re looking at are pristine examples of stars that formed during the early days of the Universe. If they are, then they stand to help astronomers understand how the very first stars actually formed — and, in that way, why stars should form at all in the first place. “If we find a pristine one, we have a lot of confidence that these stars could be among the first stars that ever formed,” Rodriguez Wimberly said.

The trick is to tell whether or not the galaxies you’re looking at are in a pristine, original state. It’s hard, because ultra-faints, because they’ve been around for such a long time, have had time for larger galaxies to disrupt them or to even merge with smaller galaxies — events that can change an ultra-faint galaxy’s character. To unwind the clock — to get back in the DeLorean and un-reionize the Universe back to when it went by Maria — Rodriguez Wimberly plans to observe ultra-faint galaxies like one called Willman 1 and study their chemical compositions using the University of California’s Keck Observatory, and by comparing those observations with models that simulate different cosmic environments over time.

Back here on Earth, in UCI’s corner of the Milky Way, Rodriguez Wimberly, when she isn’t looking at galaxies, is also the co-founder of her department’s Physics & Astronomy Community Excellence program. It’s a program that helps make the oft-labyrinthine path that is a graduate school education a bit less twisty. It’s something she built alongside fellow Ph.D. student Arianna Long after she joined the UCI Department of Physics & Astronomy’s Inclusive Excellence Committee as a Gradulate Student Representative. Rodriguez Wimberly’s also the Director of Peer Mentorship of a scholarship program called Cal-Bridge, which helps students from underrepresented groups from California’s state universities transition to Ph.D. programs at UC campuses — an effort she helps with by running professional development courses for the program’s scholars. As part of her Ascend proposal, she’ll be taking her peer-mentoring know-how and passing it on to a close corner of the galaxy over at UCR, where she’ll be working with Professor Laura Sales. “I want to try to help other people build these communities,” she said.

The first time I ever spoke with Rodriguez Wimberly, it was March 2020 and the pandemic had just started and she’d just had her first child, Zion. Zion was one of the stars that formed after Maria Rodriguez finished reionizing into Katy Rodriguez Wimberly, and now, with Qora on the way, it seems a whole new galaxy is forming, one that’s anything but faint.