Arianna’s long path to the stars

UCI astrophysicist faces the universe’s darkness with help from those around her and from the stars above her.
Lucas Joel
UCI Physical Sciences Communications 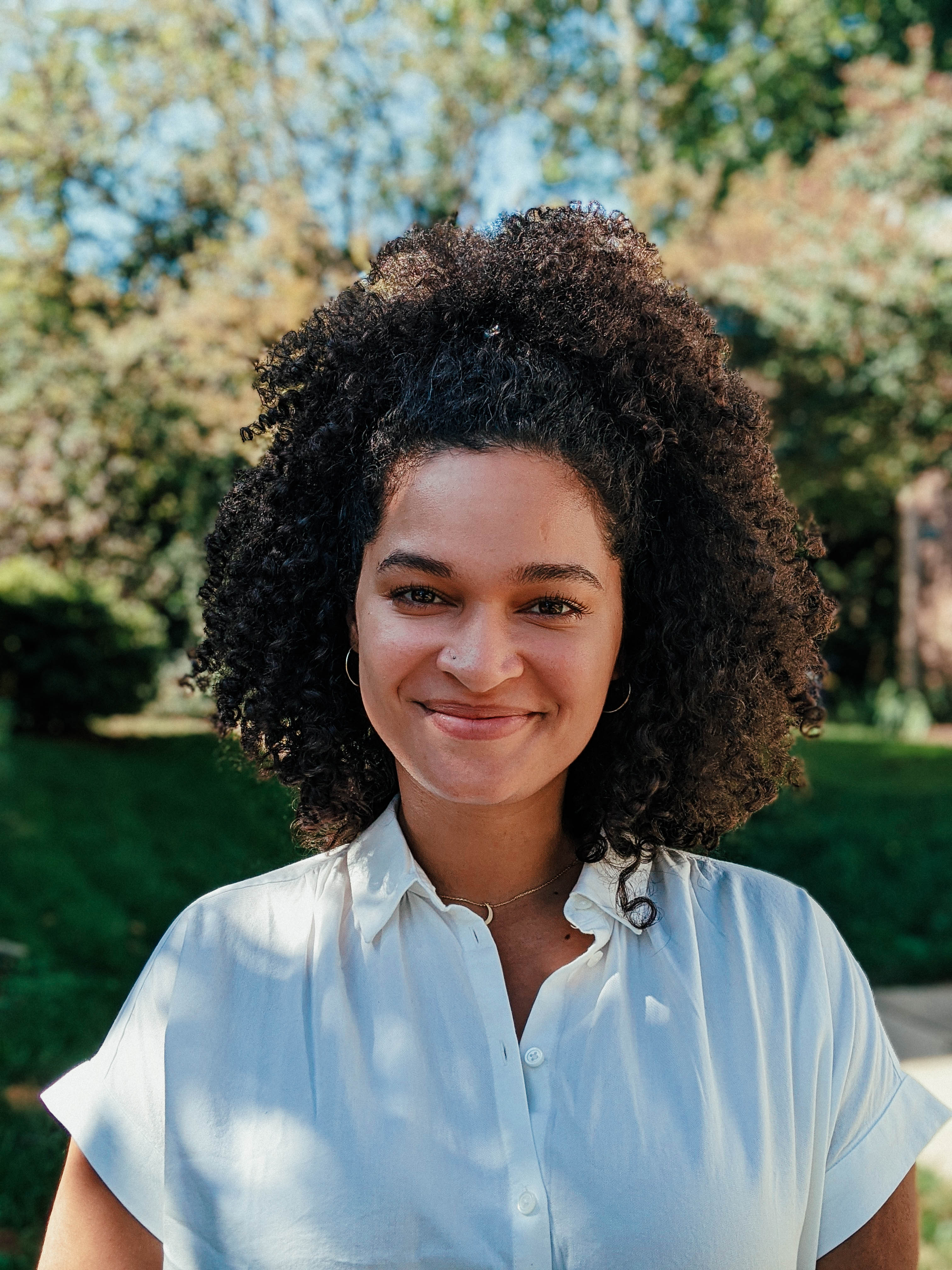 Top: A composite of two illustrations showing a dusty, star-forming galaxy. Dust enshrouds the galaxy in the bottom-left illustration, while the artist lifted the dusty veil in the top-right illustration to reveal a galaxy hard at work forming new stars.

Bottom: A portrait photograph of Arianna Long, an astrophysicist with her own constellation.

Once, when Arianna Long was a girl, she sat outside under the stars next to the ocean, and she looked out and felt the presence of something that today she describes as an immense, unknown void. “I just felt so calm, and so at peace and so centered,” she said. Long recalled this memory over a Zoom call with me in October. She’d just moved with her partner, Patrick, from UCI to Rockville, Maryland, which is the city she moved to when she was 12 with her mother from the Florida Keys.

It was in the Keys that Long sat outside and witnessed the universe. She could see the Milky Way — the silver river of stars that arcs across the spine of the sky on clear nights, and which is the galaxy we call home — and she would see the equally endless ocean, and she would dream about one day becoming an underwater archeologist, exploring coral reefs around shipwrecks. The memory of that place, like a star in a constellation, is part of a broader story that remains nebulous until the person the story belongs to decides to point into the sky and tell you about it. Then, what was a moment ago a chaotic cluster of lights, abruptly takes on new life, and the meaning of the night sky forever changes for the listener.

When we spoke, it was the memory of the Keys, now 16 years away, that Long, who’s a Black Jewish woman, pointed to as the start of her story. It’s a story that crisscrosses the country, from the Keys to Rockville, to college at Towson University in Baltimore, where she began dating Patrick, to Los Angeles, to Santa Ana, to UC Irvine and then, the other month, back to Rockville, where in her office she and Patrick keep a Lego model of the Millennium Falcon spaceship from the “Star Wars” film franchise on top of a bookshelf, just above a 1977 vinyl disco record called “Star Wars and Other Galactic Funk.”

When not listening to galactic funk, Long also loves to read science fiction and fantasy books. One of the books she loves — and she’s read it three times now — is a novel called “The Ocean at the End of the Lane” by the author Neil Gaiman. I’ve listened to the audio version of the book more times than I can recall, and it tells the story of a little boy who, with help from friends, faces abuse and darkness at home.

When Long sat outside with the stars and the ocean, she told me, she did so because her mom was doing something inside that she was not allowed to see. “My mother was a near-teenage mother,” Long said. “And she worked in the sex entertainment industry.” Her mother was also a drug addict — narcotics — and in the time lost to her mom’s job and her addiction, Long got to know the universe that she would one day study as an astrophysics Ph.D. student in UCI’s Department of Physics & Astronomy.

When she was 12, Long’s mother moved the two of them to Rockville, where part of her mother’s family lived. “We were leaving my abusive stepfather,” said Long. “I told my mom I didn’t want to live with them anymore — she promised me we could leave the next time they fought, and so we did. Within 24 hours we were packed up and driving up the coast.”

When they moved, Long lost clear night skies, and, as though jettisoned into a more distant orbital plane, her connection to the stars faded, too.

In school in Rockville, Long was at the top of her classes. “I loved school,” Long said. “It was where I excelled, felt I had control, and where I received the most praise, from both teachers and my mother. I really enjoyed learning about other worlds and mastering new concepts. And my teachers really saw that in me.”

But racism lurked in the air. Some teachers suspected cheating, Long explained, probably because she’s a Black woman. “The first time I vividly remember was in eighth grade,” Long said. “‘This is too good for you to have written it!’” she remembered her teachers spitting at her as they scrutinized her assignments. These types of accusations happened all the way through her undergraduate career — but Long’s love for academics persisted. Meanwhile, as her mom’s addiction worsened, Long gained a “bonus family” when she had to move in with her aunt and uncle and their two-year-old. Now, many years later, Long has a large, complex set of parents, siblings, and cousins who she’s grateful to have close relationships with, including her mother, who’s now several years sober and leading a happy, stable life.

The dark things that lurk in Long’s life — in this story, addiction and racism — are particularly sinister because they’re often invisible. Like monsters made of gas, they can fill a life and corrode it in every crack and corner. They find Long when she goes into stores around campus and store clerks follow her because they suspect she might be there to steal something; they find her when she’s mistaken for the only other Black woman at an academic conference; they found her when she discovered that she was hired to do data analytics for a big pharma company that made the kinds of drugs her mom had been addicted to; and they find her when she’s forced to reconcile that her dream to be a professor is bound to an institution that reinforces the same barriers and stigmas that she’s worked her entire life to overcome. “Regardless of how hard I work, how many publications I push out, how many talks I give, there will always be assumptions about me because of the body I was born into," said Long. "Unfortunately, I’m not alone — but, thankfully, many of us are out here working hard to change that.”

The dark things aren’t always there. They weren’t there when, soon after getting to UCI, she, along with fellow Ph.D. student Katy Rodriguez Wimberly, and with support from then-Physics & Astronomy chair, James Bullock, founded the Physics & Astronomy Community Excellence (PACE) program in 2017, which seeks to guide new graduate students in the department through the tempestuous waters of grad school; they weren’t there when she spent nights celebrating milestones with other graduate students of color in physics, or days doing outreach to underserved communities of people who reminded her of herself; they weren’t there when Long got to help organize and lead the Conference for Undergraduate Women in Physics held at UCI in January, which helped her connect with undergraduate women of color exploring potential careers in physics; and they weren’t there when she and Patrick lived in L.A. amidst friends who, like Patrick (who would sleep on couches as he navigated opportunities in film), were chasing their dreams. Long grew up dancing competitively, and she met some of the dancers she’d watched growing up on TV’s “So You Think You Can Dance.” “I got to meet some of them in casual settings. They were still working so hard, even though they’d made it,” said Long, who wanted to follow suit and chase a passion — but she didn’t know how to do it while ignoring practicalities. Patrick, though, told her to say the first thing that came to her mind, practicalities be damned.

And the night skies from the Keys, in deep orbit for 16 years, came again into view.

Now, when Long looks at the night sky alongside her UCI advisor, Professor Asantha Cooray, she sees more than just the Milky Way, which she described as a pretty standard, run-of-the-mill galaxy as far as galaxies go. Using telescopes like the Hubble Space Telescope and the Atacama Large Millimeter Array in Chile, Long looks at galaxies called dusty, star-forming galaxies, which are about 10 to 100 times more massive than the Milky Way. These galaxies, explained Long, who just won the School of Physical Sciences’ new Women in Natural Sciences award for her mentoring work, could be playing a role in the formation of the most massive structures in the Universe: galaxy clusters, which are groups of hundreds to thousands of galaxies bound together by gravity in the same neck of space. Dust, however, enshrouds these massive star-forming galaxies, because they make new stars at a rapid clip; they can build about 100 to 1000 stars as massive as our sun every year, whereas the Milky Way only churns out about one to three of our suns annually — and the mayhem involved in star birth creates astronomic amounts of dust. Laughing, Long said she sometimes thinks of the dust as galactic “stretch marks,” and the stretch marks enshroud these galaxies, making them hard to spot with visible-light telescopes. This makes grasping what their exact role in the formation of galaxy clusters is, like the whole night sky once was for Long, an immense, unknown void, one that she aims to fill.

Sharing her story isn’t easy, Long explained, but she does it in the hopes of creating a stronger, more inclusive community in astronomy. “All scientists are humans,” she said. “We’re real people who experience real-life joys and tragedies. My hope is that by sharing my triumphs and tribulations, I can help someone else see that their future isn’t defined or stunted by their past. You have the freedom to seek joy in your life and in your work, and if that’s by studying the stars, then do it!”

And do it, she does. Long has published two lead-author papers during her tenure here at UCI, and she hopes to publish two more before she graduates. She’s networked hard to build some of her own collaborations with scientists at outside universities, and she leads several undergrads and early graduate students through their own research projects. She’s received a campus-wide reward for her excellence in mentorship, and regularly mentors nearly a dozen women of color in STEM fields. She’s held leadership roles on several departmental committees, and runs mentoring workshops for on- and off-campus events.

But professional stars aren’t the only stars in her constellation. Long is a person of many interests — a “renaissance nerd,” as she described herself. “Part of the recovery process from childhood trauma is to explore new passions and hobbies that maybe we didn’t get the chance to enjoy when we were young.” She enjoys her science, but she spends her free time learning and doing in other areas: she reads lots of science fiction, she reads education, mentoring and retention literature, she cooks, she keeps diverse collections of houseplants, and she writes. “I love writing, though it’s usually for personal or motivational purposes,” she said. Nevertheless, come 2021, you can find a piece of her science writing in the January issue of Scientific American.

Above her desk, not far from her galactic funk album, Long keeps a number of charts that help her calculate how far in time and space the galaxies she studies are from Earth. By the time you read this, the stars of Long’s tale will be in different positions — and they’ll have shifted a bit more still before you read the next and last sentence. Some will have drifted away, but, like the memory of the stars and the ocean at the end of the lane in the Keys, they can return on some distant day to shine new light on the path ahead, whatever dark things might be there.