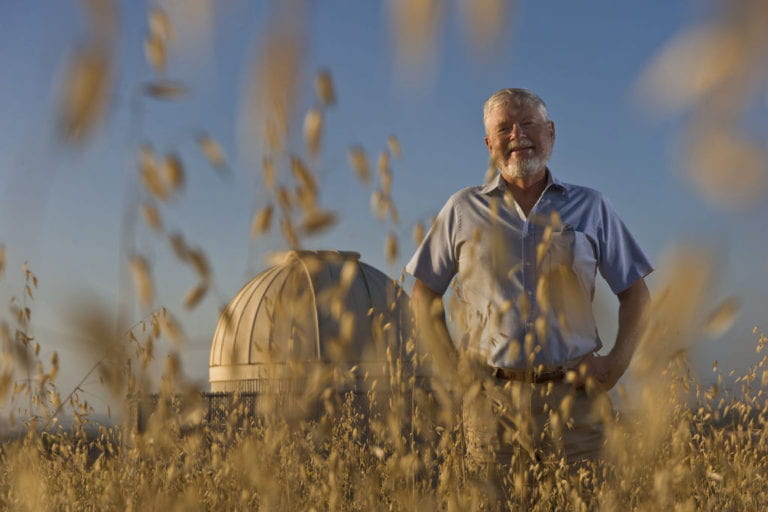 “The magnitude of the climate problem is enormous; in a single year, about 10 billion tons of carbon dioxide gets into our atmosphere and stays there,” says Gregory Benford, UCI professor emeritus of physics & astronomy. “Other methods of carbon sequestration that have been proposed are in the megaton range, but we believe that CROPS can achieve that easily and go for far more.”

Growing up in Fairhope, Alabama, in the mid-20th century, Gregory Benford engaged in more than his share of character-building employment. In sun-parched farm fields, he chopped sugar cane and bagged potatoes. On shrimping and fishing boats operating out of Mobile Bay, he hauled in nets laden with the ocean’s produce.

Those years of toil on the land and water planted a seed in Benford’s young brain that would, decades later, sprout into CROPS, a nascent commercial enterprise he co-founded that may prove to be one of the most practicable and effective approaches to solving climate change ever devised.

Crops Residue Oceanic Permanent Sequestration is a method of atmospheric carbon dioxide removal that’s simple, straightforward and globally scalable. It relies on the seasonally regulated natural processes of our planet combined with readily available farm labor and unremarkable, centuries-old equipment such as baling wire, trucks and barges. Essentially, CROPS involves bundling agricultural waste into half-ton cubes and transporting them out to the deep sea, where gravity will take them to the ocean floor. Here, the carbon that was once in the air will sit unperturbed for millennia.

“The magnitude of the climate problem is enormous; in a single year, about 10 billion tons of carbon dioxide gets into our atmosphere and stays there,” says Benford, UCI professor emeritus of physics & astronomy. “Other methods of carbon sequestration that have been proposed are in the megaton range, but we believe that CROPS can achieve that easily and go for far more.”

A dominant factor, he notes, is expense. Carbon dioxide is currently being removed from the air by an industrial plant in Iceland that took five years and $500 million to build – at a cost of $1,000 per ton of CO2. Benford says that to seriously address the rise of the greenhouse gas in the atmosphere, we need to take out about 5 billion tons annually.

“Five billion times $1,000 is $5 trillion. Per year. It’s not going to happen industrially,” he says. “Compare that with our technology for pulling carbon dioxide out of the air: plants, which do the job for free. In carbon sequestration, most people want to build plants, but we want to sequester plants.”

Benford and his collaborators have been developing the CROPS concept for decades. They published peer-reviewed papers on it in 2001 and 2009. Twelve years ago, they sank a 1-ton bale of corn stover – plant detritus left in a field after harvest – in the deep ocean off the coast of California. Researchers at the Monterey Bay Aquarium Research Institute have made trips to the site every three years or so to collect samples. So far, according to Benford, the block of material has remained intact and inert.

“Our method is to place this stuff on the sea floor, below the thermocline, where the water temperature is just above freezing,” he says. “There’s almost nothing alive beyond microbes at the bottom of the ocean because there is no oxygen, no light and no nutrients, so the CROPS approach will have zero to minimal impact on the marine habitat.”

Early customers for CROPS carbon systems include French farmers who view the technique as a way to offset the carbon dioxide they produce, Benford says. Other countries with large agricultural sectors and extensive river networks, such as Russia and Brazil, are good candidates. And the biggest prize of all would be the United States, the world’s leading agricultural producer and exporter, as well as a major CO2 emitter. Benford envisions barges of bundled carbon navigating the Missouri, Ohio and Mississippi rivers on their way to the Gulf of Mexico for long-term storage of their cargo.

Benford and his twin brother, James, both studied at UC San Diego in the mid-1960s. Having earned a Ph.D. in physics in 1967, Benford moved to the Bay Area, lured in nearly equal parts by his interest in rock ’n’ roll music and a job at Lawrence Livermore National Laboratory under the direction of famed nuclear physicist Edward Teller.

He joined UCI’s Department of Physics & Astronomy in 1971 and earned tenure within two years. “Things just happened more quickly in those days,” he says. Another difference: While today’s scientists tend to pick a field and stick with it, Benford started as a theoretical physicist in Livermore, was hired to conduct plasma physics research at UCI and began delving into plasma astrophysics later in his career.

He was closely aligned with Norman Rostoker, the late UCI professor of physics & astronomy, whose ideas about particle physics and fusion formed the kernel of another effort to do some good for the climate, that of Orange County-based energy company TAE Technologies, formerly Tri Alpha Energy.

Benford holds several patents and is behind eight startup companies in the biomedical field. And he’s a major figure in the world of “hard science fiction,” a segment of sci-fi that hews more scrupulously to scientific reality, he says. Benford has lost count of how many books he’s published, but a scroll through titles at a popular online book retailer shows 40 to 50 entries. Timescape, a novel he wrote in the 1970s about how scientists might think and work in the near future has sold more than a million copies.

“My brother and I both loved science fiction when we were kids, and so we quickly figured out that we wanted to pursue careers in science,” Benford says. “Working on fishing vessels and farms in the Deep South convinced me that it would probably be smarter to go into a more intellectually driven field, so theoretical physics it was.”

He says that the idea for CROPS came to him decades ago while he was sailing in the South China Sea. “I was struck by the enormity of the ocean; it’s the majority of the area of our planet. When you combine that profound and simple fact with processes evolved by the biosphere itself to take CO2 out of the air, you have a carbon sequestration technique that’s bound to work.”

“It’s true; it’s a natural process,” Benford adds. “So I guess it helps to have grown up on a farm.”