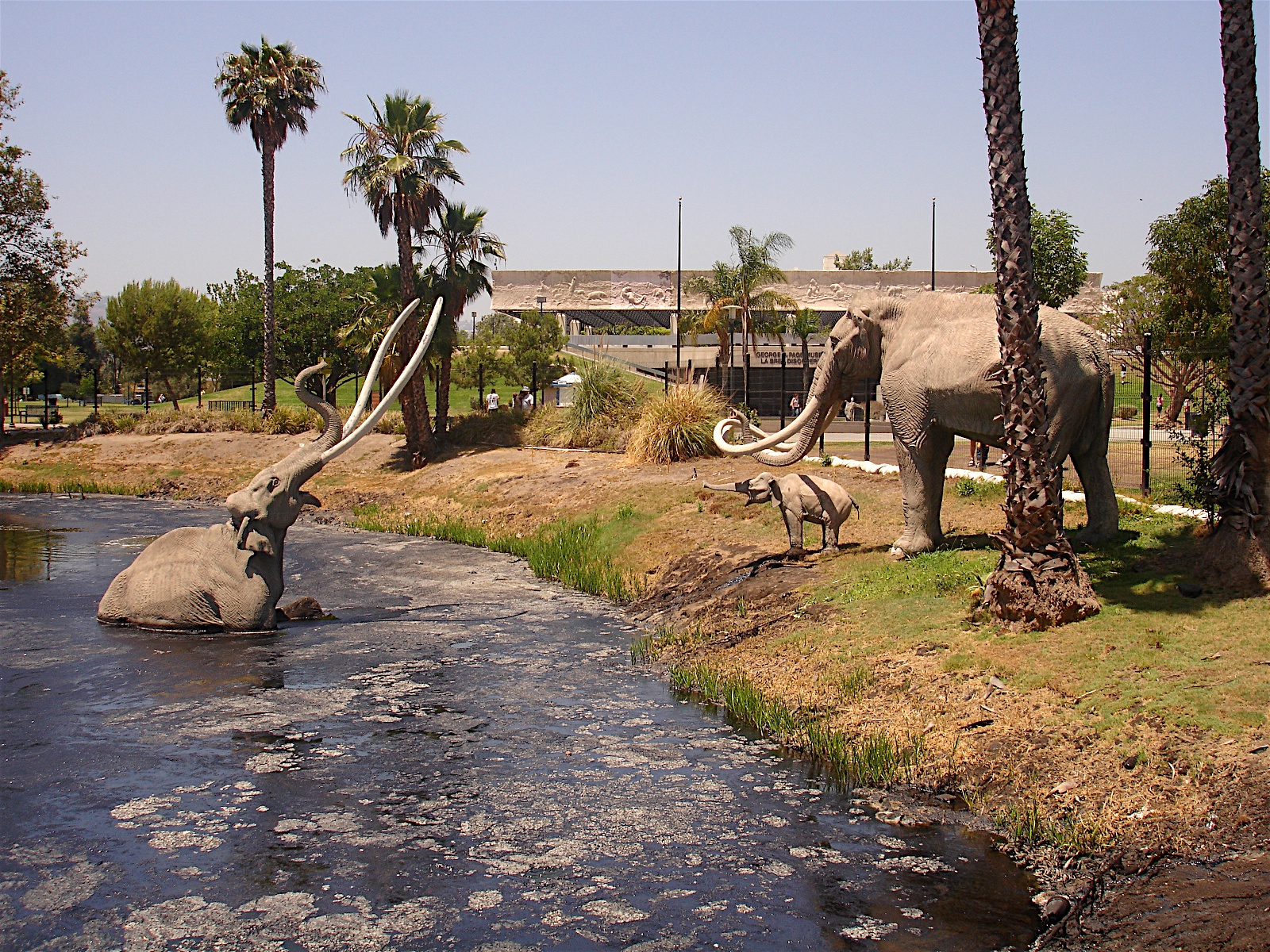 Mammoth replicas at the La Brea Tar Pits Museum in Los Angeles. One UCI collaborator crawled into the skull of a La Brea mammoth to retrieve fossil insect remains for analysis at the Keck facility.

There’s a crack in time just up the 405 freeway, off Wilshire Boulevard right next to the LA County Museum of Art. If you’re walking on the sidewalk there, just outside the La Brea Tar Pits and Museum, you might see something black oozing out of cracks in the sidewalk. That’s from the time crack: the ooze is tar, which, working like a preservative, has ensnared plants and animals — including one human — in tar pits more or less consistently for the last 50,000 years. The pits offer, for the scientists who’ve excavated its depths and for the people who visit the museum there, a collage of snapshots of Los Angeles life through the ages, with the pits acting as a sort of morbid camera.

The snapshots reveal a diverse cast of characters. There were saber-toothed cats with teeth as long as kitchen knives and, serrated, just as sharp. There were the mammoths and mastodons the saber-toothed cats likely ate. There were the dire wolves that probably scavenged on the remains left behind by the cats. And there were plant seeds, and insects, too. And there were giant ground sloths that may’ve eaten things like Joshua trees, and, in a more recent find, coprolites (fancy speak for fossil poop).

The tar does a good job of preserving this life because the tar, devoid of very much oxygen, makes for a poor place for bacteria to thrive and decompose the remains further.

But the tar is also a problem. Quite often, paleontologists find fossils preserved in rock layers that, like the pages of a book, form one after the other. This can give a paleontologist a sense for how an ecosystem changed through time. But at the pits, it seems, scientists can’t have their tar and sniff it, too, as clear layers are a rarity.

So how does one tell time when all you have is what amount to a sticky jar of molasses filled with bones and other fossils?

If you could tell time, the pages of the book that tells the story of the history of life in the area would begin to sort themselves out, and could reveal something about why, for instance, none of these creatures roam Southern California anymore. Many are thought to’ve gone extinct at the end of the last ice age around 10,000 years ago. But, without good time constraints, how that extinction story unfolded — and how humans may’ve been involved — will remain blurry.

“All of that, you have to be able to precisely know when that fossil was around,” said Emily Lindsey, assistant curator and excavation site director at the La Brea Tar Pits and Museum.

One tool a scientist like Lindsey can use if they want to know the age of something is the natural radioactive decay of certain elements that comprise the thing they want to date. Such elements decay at a constant rate, and so if you can measure the amount of the original element compared to what it decayed into, you can calculate an age for your sample. One such radioactive element is carbon, which decays over time in a slightly lighter version of itself.

Tar is made of a lot of carbon, but, Lindsey explained, “tar is radioactively dead,” she said. “You’d get erroneously old dates,” as the carbon has already fully decayed.

The bones themselves have radioactive carbon, however, and, using a method developed in collaboration with the W.M. Keck Carbon Cycle Accelerator Mass Spectrometer at UC Irvine, would sonicate the La Brea remains and separate the tar from the fossils. “What you’re left with is what seems to be pure collagen that you’re then able to date,” Lindsey said.

Methods existed before to separate the tar from the carbon, but, according to John Southon, who co-founded the Keck facility, they were expensive and it was a “hell of a lot of work,” he said. But the center can process samples quickly and cheaply, and the results are already helping unblur the past.

Results are revealing that fossil insect remains, some, Southon explained, were scavenged from the inside of a mammoth skull, can deliver accurate radiocarbon dates, and are also good proxies for what past climate was like in the region.

And precise dating of coprolites reveals that woodrats, which still live in the area today, were scurrying around under the feet of larger mammals.

Keck has even helped clear a mystery involving the one human skeleton discovered in the pits, and whether or not a domestic dog discovered near the skeleton existed at the same time as the so-called “La Brea Woman.” (It didn’t.)

The dates are only just beginning to help reveal the tale behind the tar — but the results, Southon explained, promise to reveal never-before-seen chapters in Southern California’s natural history, including the mass extinction 10,000 years ago. “Is it climate change or is it humans?” he said.

And whatever they find, the results will make their way out of the crack in time and into the museum itself. “I’m excited about the opportunity to document an entire ecosystem through time,” Lindsey said. “The new exhibits are going to include that modern science.”