From the Sky Above to the Sea Below 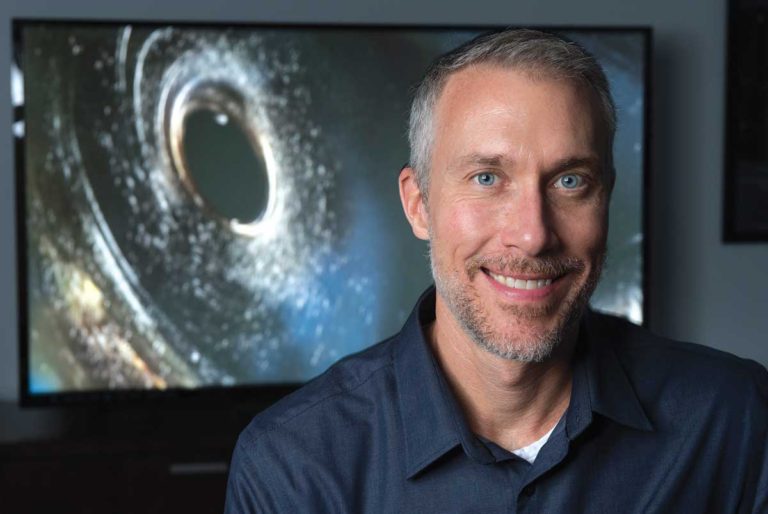 James Bullock, dean of physical sciences, says that half of the school’s faculty are working with AI to propel new discoveries – changing how science is conducted.

The UCI researchers who probe the Earth and sky for answers to momentous questions about the environment, the oceans and the atmosphere have gotten smart about unlocking solutions. The key: They turn billions of pieces of data into insights by embracing artificial intelligence and machine learning.

AI – with its growing presence on campuses worldwide – has already transformed what computers can do for scientists and is now being touted as potentially revolutionizing academic research in the next few years.

“The excitement is palpable,” says James Bullock, dean of the School of Physical Sciences and professor of physics & astronomy, describing the effect machine learning has had on basic physical science research. “There is a sense that we’re about to experience a phase change in the way science is done.”

Roughly half of the school’s faculty are using or developing machine learning algorithms to drive new discoveries, he says, in areas that include climate change, particle physics, quantum simulation and materials science.

“Probably the most oversubscribed talk series in the School of Physical Sciences is our Machine Learning Nexus seminar, which brings together researchers from all of our subfields – astronomy, chemistry, climate science and physics – to share techniques and ideas in this domain,” Bullock notes.

In addition to its uses in academic research, machine learning equips students with the expertise to pursue a variety of careers in well-established companies or in industrial research.

Shane Coffield, a Ph.D. candidate in Earth system science, says that the university’s machine learning program influenced his decision to choose UCI for his graduate education.

“It started a really fruitful collaboration,” he says. “I get to work with experts who help me understand the best tools to apply to my science.” Coffield and his UCI research partners received international media coverage for their wildfire predictions. The group is just one of several UCI Earth system science teams that have had studies utilizing machine learning tools published recently.

Another such team includes Associate Professor Michael Pritchard, who calls AI “a big game changer” in his field. He’s a cloud guy, with office walls that sport posters of swirling white satellite images.

“I remember being enamored with clouds when I was 5 or 6 years old,” he says. “My family moved around, and I went on a lot of international flights. I fought with my brothers because I always wanted to be next to the window to look at the clouds.”

Pritchard worked with researchers from UCI, the Ludwig Maximilian University of Munich and Columbia University to develop deep machine learning tools that would factor clouds into climate models. Their research was published in September 2018 by the Proceedings of the National Academy of Sciences.

He is particularly fond of stratocumulus clouds – the marine layer – common in Southern California. “They’re the beautiful clouds you see out your window if you fly from here to Hawaii. They’re unbroken, ripply, a dazzling bright layer,” he says.

But clouds frustrate climate scientists: It’s difficult to factor them into predictive models because of their size and variability.

“They can be formed by eddies as small as a few hundred meters, much tinier than a standard climate model grid resolution of 50 to 100 kilometers, so simulating them appropriately takes an enormous amount of computer power and time,” Pritchard says.

It’s hard to know if a warmer world will bring more low-lying clouds that shield Earth from the sun, cooling the planet, or fewer of them, warming it up, he says.

AI, which Earth system scientists find masterfully efficient, could make a difference. “If we try to simulate the whole planet’s atmosphere, we’re horsepower limited, because we have to simulate it for a hundred years,” Pritchard says. “But with machine learning, we could speed that up – maybe we only have to simulate three months of atmosphere. Then we could really do justice to detailed cloud physics.

While Pritchard looks to the sky for his field of study, his colleague Adam Martiny, professor of Earth system science as well as ecology & evolutionary biology, focuses on the deep blue sea.

“AI offers a new way of doing science that’s very exciting,” says Martiny, noting that it can present the unexpected. His research has contradicted prevalent views about the effects of global warming on phytoplankton in tropical waters. The study was published in January in Nature Geoscience; his co-author was Earth system science professor Francois Primeau.

Martiny, the lead researcher, explains: “AI is a set of tools that are super useful when we’re working with large amounts of data because it helps us see new patterns. In the past, based on our best theories, we had predicted that as the ocean heats, the plankton that lives there would become more stressed.”

Instead, using AI, they were able to forecast that phytoplankton populations in low-latitude waters will expand by the end of the 21st century.

“There is a sense that we’re about to experience a phase change in the way science is done.”

“We give the model tons and tons of data,” Martiny says. “Artificial intelligence tools can help us challenge existing paradigms.”

That’s exactly what happened in this project. The researchers had a very large dataset describing the abundance of phytoplankton in various regions. “We asked what the relationship was between common environmental factors such as nutrients and temperature,” Martiny says. “Much to our surprise, in the low-latitude regions and tropics, we saw a very significant positive relationship between temperature and abundance of these plankton.”

It wasn’t what they expected to find. “We were very puzzled,” he says, “because it essentially offered a very different outcome on how warming and stratification would affect these populations.”

One possible explanation for the growth focuses on the life cycle of phytoplankton. “When plankton die – especially these small species – they sit around for a while longer,” Martiny says. “And maybe at higher temperatures, living plankton can more easily degrade them and recycle the nutrients back to build new biomass.”

What’s next? “The AI and mechanistic models give such opposite results. I don’t know which one is right,” he says. “That’s for the next round of research to figure out. But AI really opened a door.”

The same is true for doctoral student Coffield and his collaborators, who have been using AI and machine learning to determine which wildfires will burn out of control. The technique they developed helps project the final size of a fire from the moment of ignition, thus allowing firefighters to more efficiently allocate scarce resources.

The researchers’ analysis, which focused on Alaskan fires, is highlighted in a study published in September 2019 in the International Journal of Wildland Fire. Coffield worked with an interdisciplinary team and with co-author James Randerson, professor and Ralph J. & Carol M. Cicerone Chair in Earth System Science at UCI.

Alaska was used as the locale for the project because the state has been plagued over the past decade by a rash of concurrent fires in its boreal forests, threatening people and vulnerable ecosystems.

“In Alaska, there can be huge numbers of fires burning at the same time,” explains lead author Coffield. “Our goal was to help fire managers predict the largest fires before they get out of control – kind of a triaging system.”

“Machine learning is promising because we’re living in a world where there’s so much data,” he says. “You dump in all the data you have, and it figures out the underlying patterns, whereas in the more traditional approach, you know the laws of physics, and you put in the rules and start from the bottom up.”

Coffield and the UCI team are now focusing on California fires and forests. “We’re building off some of the things we learned from the Alaska study,” he says, “and are creating a more complex machine learning based model for predicting fire spread in California.”

Machine learning is “a really powerful tool,” Coffield adds. “There’s so much to be learned from it.”