New postdoc in the Department of Physics & Astronomy has research opportunities for students looking to study the origins of everything.
Lucas Joel
UCI Physical Sciences Communications 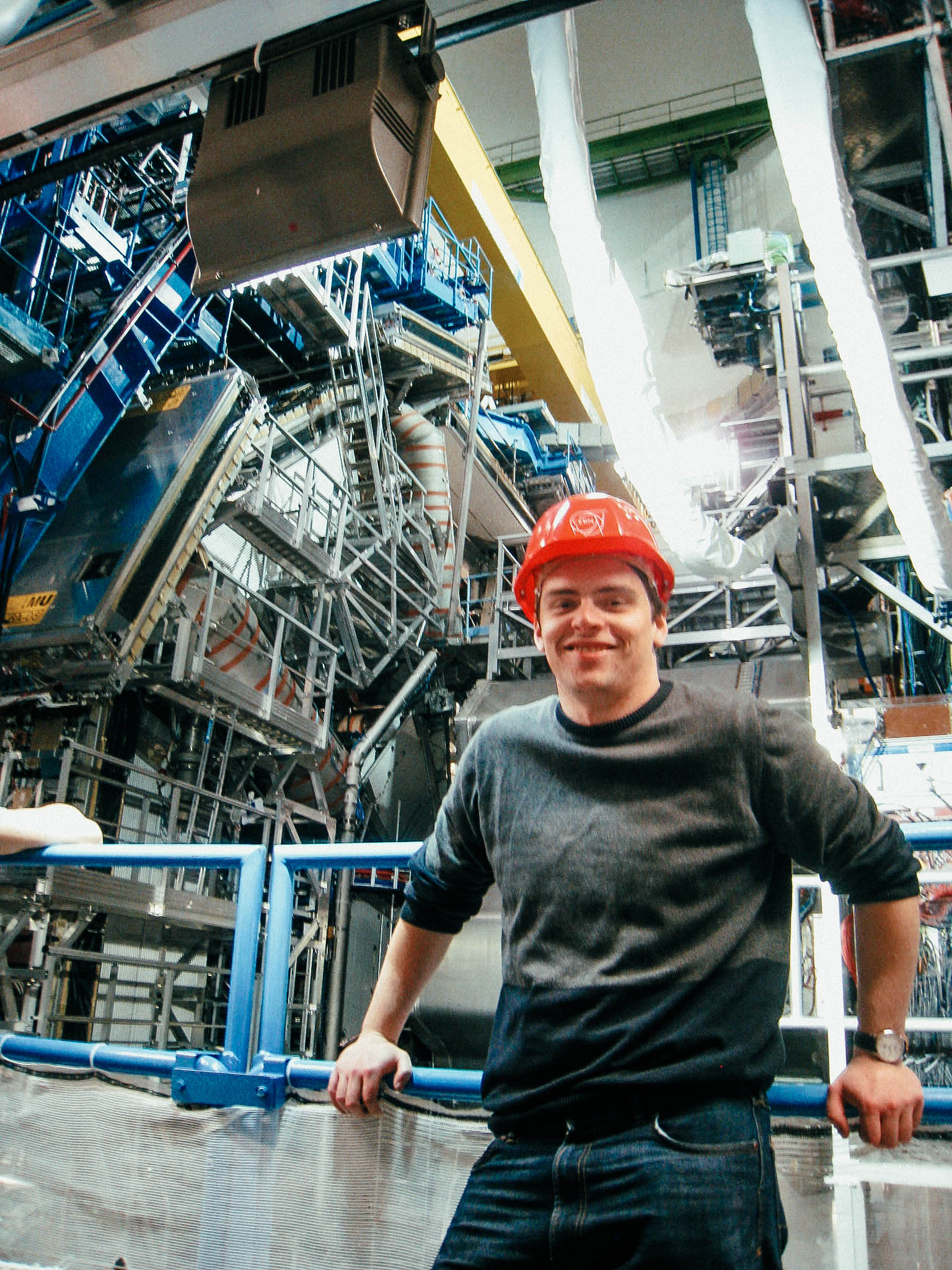 Mike Fenton, standing at CERN, wants to unravel why the universe started the way it did.

When particle physicist Mike Fenton moved to America last September, things didn’t go quite right for him. But Fenton will be the first to tell you that when the universe began some 13.7 billion years ago during the Big Bang, things started out just right.

The forces that make the universe tick came into being just after the Big Bang happened, and any change in those initial starting conditions “would fundamentally change the way the universe had evolved,” says Fenton, who’s a postdoctoral researcher in UCI’s Department of Physics & Astronomy.

It was like the Goldilocks fairy-tale, only in this version Goldilocks found the “just right” porridge, chair and bed right off the bat.

“If gravity was a tiny bit stronger, then things would be pulled together more, and the universe would just collapse back in on itself,” Fenton says. “But if it was weaker, you wouldn’t have matter clumping together to make stars and planets for us to evolve on. In some sense, it’s like it was just right.”

Things were just right for the universe — but not for Fenton when he got to the U.S., because on his first night he had only a travel towel to use as a bed sheet and a travel neck pillow to use as a pillow. He soon got a duvet and a proper pillow, and then he wanted to be able to get around more easily, so he went to a Subaru dealership. Fenton told a dealer there that he wanted to buy a car, but when he said he was from the U.K., the dealer told him that even though he might have perfect credit history back home, it wasn’t going count for anything in the U.S.

“He thought it was hilarious, and he laughed at me as I walked out,” says Fenton. “I literally got laughed out of a Subaru dealership.”

Gravity, it seems, was either too strong or too weak for Fenton that day.

But gravity wasn’t too strong or weak when the universe began, which is why Fenton came to work at UCI. He’s here to try and understand why the universe began as ideally as it did. To do this, he’s joined the ranks of thousands of other scientists at the European Center for Nuclear Research, or CERN, which straddles the border between France and Switzerland in Geneva. At CERN, there’s a machine called the Large Hadron Collider, which is a 17-mile-long machine that makes subatomic particles travel at close to the speed of light, and then smashes those particles together.

Colliding subatomic particles at such high energies, Fenton explains, creates conditions that mimic those that existed when the Big Bang happened.

“The higher energy you get, the closer back to the Big Bang you get,” says Fenton, who works with Professor Daniel Whiteson.

Fenton works from home in Huntington Beach, and some days he wakes up at 3 a.m. so he can join CERN’s online meetings. The coronavirus pandemic — another change to his U.S. starting conditions — isn’t altering the way his time here is evolving too much.

“I in principle can do everything I can do work-wise just with a laptop and a Wi-Fi connection,” Fenton says. For this reason, he’s now on the lookout for undergraduate and graduate students who may want to join him in investigating the origins of everything.

Fenton studies the Big Bang — and, in the meanwhile, his own universe has been correcting itself: a white car now sits in his driveway. After the Subaru experience, Fenton rode his bike to a Mazda dealership, and drove away in a car.

“The guy was laughing at me as well, but in a much friendlier way,” Fenton says. The dealer laughed because, in their 12 years of selling cars, they’d never seen anyone come to the dealership on a bike before.

Fenton put his bike in the back of the car — he made sure it fit just right — and he drove away.