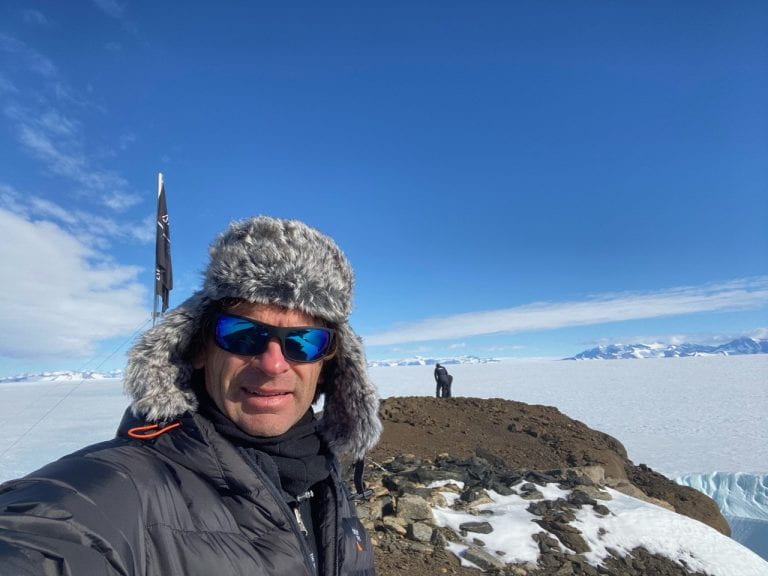 Eric Rignot, UCI professor of Earth system science, recently was invited to visit the Belgian research facility Princess Elisabeth Antarctica. During his time there, Rignot, through a video link, conducted the opening session of ESS 21, a lower-division climate science course for nearly 400 students.

Connecting with nearly 400 freshmen and sophomore students in the ESS 21 “One Thin Ice” class via Zoom, Rignot started with a routine discussion of his syllabus, grading policy and advice on the importance of taking notes. Following these perfunctory mentions, the renowned polar ice scientist recounted his journey, which included a flight from LAX to Washington, D.C. Next up, a 14 hours in business class trip to Cape Town, South Africa, and then a five-hour hop across the South Atlantic Ocean nearly due south to the frozen continent.

Rignot was invited to visit the research outpost by its director Alain Hubert, who dropped into the Zoom session to tell the students how hard it is to cross Antarctica on a pair of skis and talk about the station’s unique zero-carbon operations. The facility – with its wind, solar and battery power system and computerized energy usage controls – is viewed as a prototype that may help guide the development of future climate-friendly structures around the world.

“People who come here are really impressed by what they see, and it should inspire the design of other stations around Antarctica,” Rignot said. “Beyond that, it serves as an example of what we can do in big cities like Los Angeles. If these [zero-carbon] facilities can be built in such a harsh environment as Antarctica, then it can work elsewhere.”

Hubert said the laboratory has shown the promise that can be realized when scientists and engineers from around the world unite behind a common cause.

Rignot told his students that the research community in Antarctica is bound together by the notions of survival and scientific curiosity.

“Change is forced on us by our own actions, but this is not a doomsday scenario. There is still a lot we can do,” he said. “We have to get into motion on the way we live on this planet. The way people are living and working here shows that we don’t have to be poor and uncomfortable while protecting the climate. We can all be much better off.”

Rignot closed his first meeting of ESS 21 to begin the next part of his short visit to Antarctica. Before returning to Irvine, he said he wanted to put his ocean robot through a bore hole about 80 miles from the research station to make long-term observations of ice-ocean interactions and how the ocean melts away Antarctica’s ice.