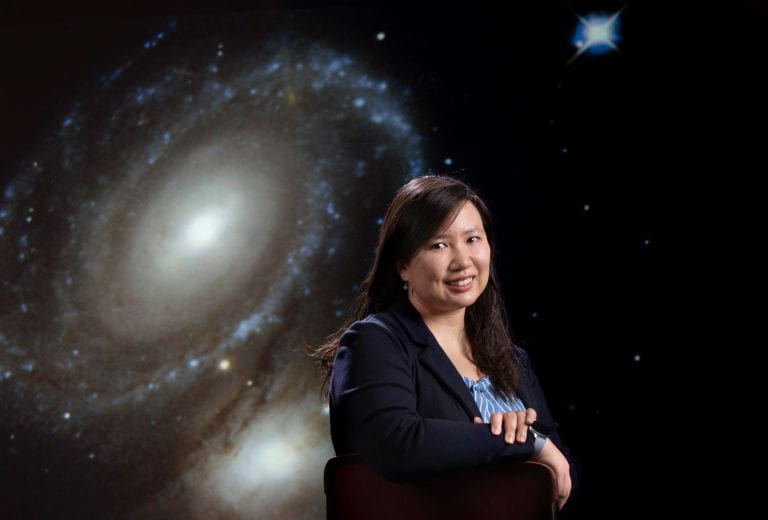 Vivian U, UCI assistant research scientist in physics and astronomy, is a member of a James Webb Space Telescope Early Release Science team that’s using access to data from the JWST’s advanced new instruments to learn unexpected things about nuclear dynamics in nearby galaxies.

Irvine, Calif., Nov. 14, 2022 – First in line to receive data transmissions from the James Webb Space Telescope, a team of astronomers at the University of California, Irvine and other institutions is using the unprecedentedly clear observations to reveal the secret inner workings of galaxies.

In a paper published today in The Astrophysical Journal Letters, the researchers describe their examination of the nearby galaxy NGC 7469 with the JWST’s ultrasensitive mid-infrared detection instruments. They conducted the most detailed analysis yet of the interactions between an active galactic nucleus dominated by a supermassive black hole and the star-forming galaxy regions surrounding it.

“What we are seeing in this system has been a surprise for us,” said lead author Vivian U, UCI assistant research scientist in physics and astronomy and member of one of 13 JWST Early Release Science teams. “Viewing this galaxy face-on, we are able to see not only winds from the supermassive black hole blowing in our direction but also ‘shock heating’ of the gas induced by said winds very close to the central active galactic nucleus, which is something we had not expected to be able to discern so clearly.”

U noted that shock heating happens when wind from a black hole in a galaxy’s center pushes on surrounding dense gas, creating a shock front that deposits energy into the interstellar medium. This effect could influence star formation in two opposing ways, she said. By compressing the gas into molecular form, it can foster the birth of new stars, or excessively strong feedback processes from the galactic wind can prevent birth by destroying stellar nurseries. 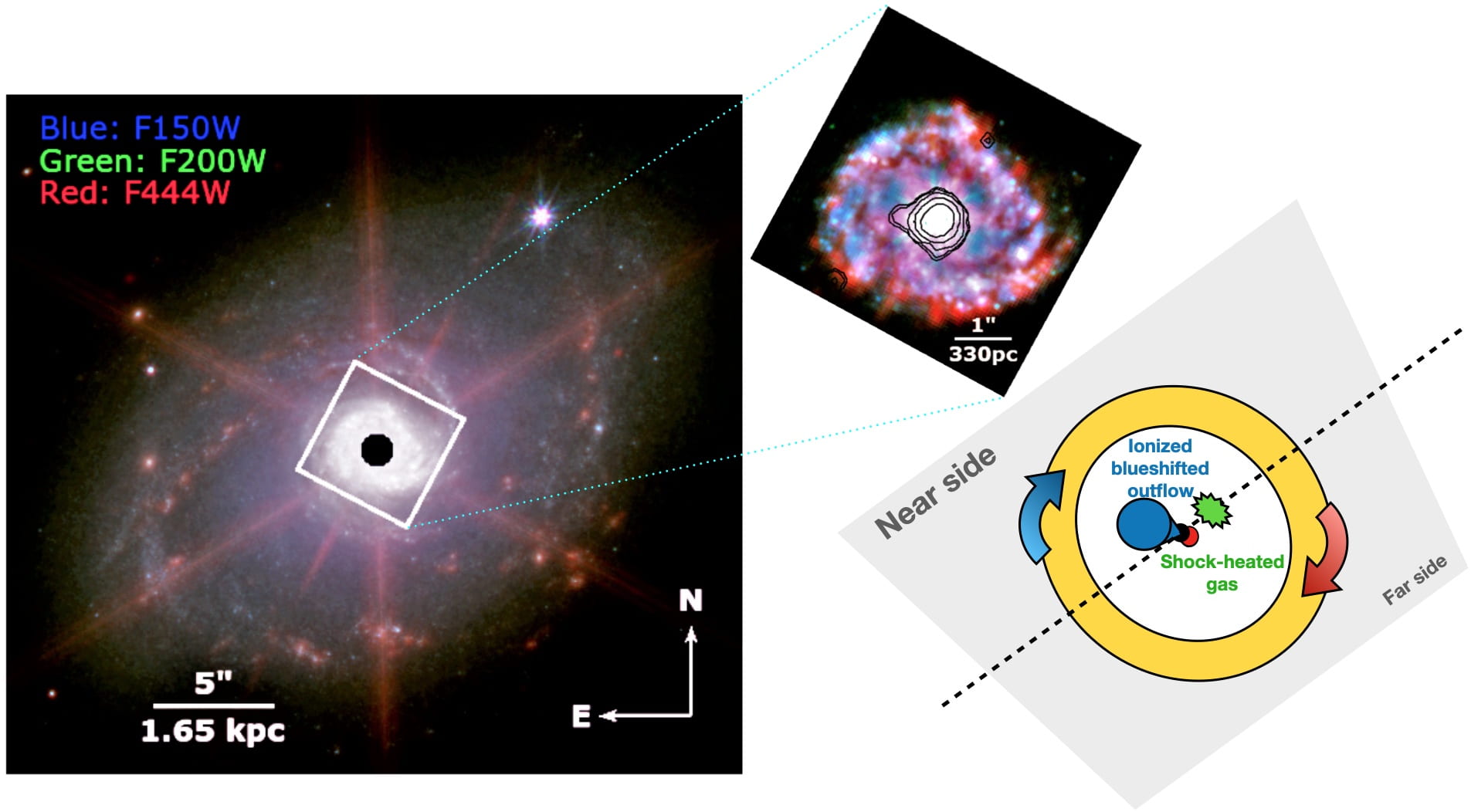 According to U, NGC 7469 is a Seyfert galaxy with an active center hosting a supermassive black hole and a ring of star-forming regions. For decades, astronomers have tried to study the detailed dynamics of these systems, which make up about 10 percent of all galaxies, but dust – commonly abundant at the center of them – has made that a challenge. The JWST gave U and her co-authors access to what lies behind the dust veil.

Using the telescope’s 6.5-meter mirror and advanced suite of tools, including the Mid-Infrared Instrument, the researchers were able to map several key ionized and molecular gas emission lines that inform astronomers about the conditions of the interstellar medium – the gas, dust and radiation that exist between star systems in a galaxy – pinpointing star-forming regions within a starburst ring. They also detected a high-velocity outflow of ionized gas that’s “blueshifted,” meaning it’s coming toward the observer versus traveling in the opposite direction.

“The newly realized capability of mid-infrared integral field spectroscopy from the JWST’s Mid-Infrared Instrument now allows us to see not just what’s there behind the dust but also how things are moving at very small scales that we couldn’t previously see at these wavelengths,” U said.

“We now have a more coherent picture – at least in this system – of how the active galactic nucleus is driving out gas and how that’s impacting the surrounding material,” she added. “We see definitive signs of the black hole-driven winds dumping energy out into the interstellar medium.”

U said that a significant contributor to the roiling dynamics of NGC 7469 is the fact that it’s merging with a second galaxy.

“The interaction with another galaxy means that galactic materials are being moved around as a result of tidal forces, and they file toward the center of the galaxy system when angular momentum is lost. This process tends to make the galaxy center very dusty,” she explained. “That’s why you need instruments like the ones aboard the JWST that allow us to peer through the dust and facilitate our understanding of the dusty cores of merging galaxies.”

Today’s publication is among the first in a series of papers from U and her collaborators that analyze data from the JWST Early Release Science program No. 1328. According to U, the spectacular imaging and spectroscopic data from the JWST offer an in-depth view of how galaxies evolve through the merging mechanism and enable her team to delve into the physics of star formation, black hole growth and feedback in nearby merging galaxies.

Principal investigators include U, Lee Armus at the Infrared Processing & Analysis Center at Caltech and Aaron Evans with the National Radio Astronomy Observatory in Virginia. The study was supported by NASA and based on observations from the James Webb Space Telescope, which is jointly operated by NASA, the European Space Agency and the Canadian Space Agency.

About UCI’s Brilliant Future campaign: Publicly launched on Oct. 4, 2019, the Brilliant Future campaign aims to raise awareness and support for UCI. By engaging 75,000 alumni and garnering $2 billion in philanthropic investment, UCI seeks to reach new heights of excellence in student success, health and wellness, research and more. The School of Physical Sciences plays a vital role in the success of the campaign. Learn more by visiting https://brilliantfuture.uci.edu/uci-school-of-physical-sciences.