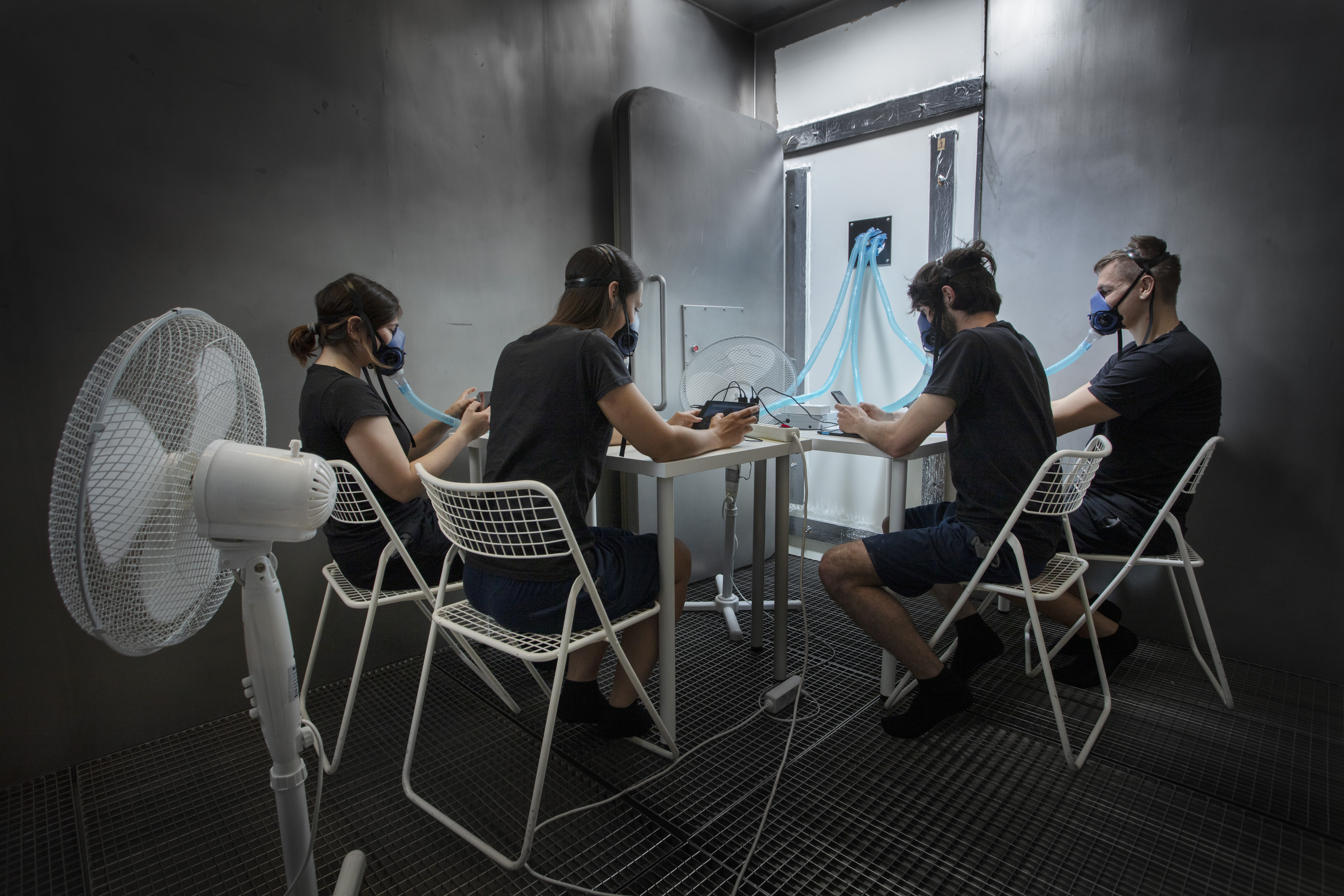 Study participants like these helped reveal how our skin plays a role in altering the chemistry of indoor spaces.

People typically spend 90 percent of their lives inside, at home, at work or in transport. Within these enclosed spaces, occupants are exposed to a multitude of chemicals from various sources, including outdoor pollutants penetrating indoors, gaseous emissions from building materials and furnishings, and products of our own activities such as cooking and cleaning. In addition, we are potent mobile emission sources of chemicals that enter the indoor air from our breath and skin.

But how do the chemicals disappear again? In the atmosphere outdoors, this happens to a certain extent naturally by itself, when it rains and through chemical oxidation. Hydroxyl (OH) radicals are largely responsible for this chemical cleaning. These very reactive molecules are also called the detergents of the atmosphere and they are primarily formed when UV light from the sun interacts with ozone and water vapour.

Indoors, on the other hand, the air is of course far less affected by direct sunlight and rain. Since UV rays are largely filtered out by glass windows it has been generally assumed that the concentration of OH radicals is substantially lower indoors than outdoors and that ozone, leaking in from outdoors, is the major oxidant of indoor airborne chemical pollutants.

OH radicals are formed from ozone and skin oils

However, now it has been discovered that high levels of OH radicals can be generated indoors, simply due to the presence of people and ozone. This has been shown by a team led by the Max Planck Institute for Chemistry in cooperation with researchers from the USA and Denmark.

"The discovery that we humans are not only a source of reactive chemicals, but we are also able to transform these chemicals ourselves was very surprising to us," says Nora Zannoni, first author of the study published in the research magazine Science, and now at the Institute of Atmospheric Sciences and Climate in Bologna, Italy. "The strength and shape of the oxidation field is determined by how much ozone is present, where it infiltrates, and how the ventilation of the indoor space is configured," adds the scientist from Jonathan Williams' team. The levels the scientists found were even comparable to outside daytime OH concentrations levels.

The oxidation field is generated by the reaction of ozone with oils and fats on our skin, especially the unsaturated triterpene squalene, which constitutes about 10 percent of the skin lipids that protect our skin and keep it supple. The reaction releases a host of gas phase chemicals containing double bonds that react further in the air with ozone to generate substantial levels of OH radicals. These squalene degradation products were characterized and quantified individually using Proton Transfer reaction Mass Spectrometry and fast gas chromatograph-mass spectrometry systems. In addition the total OH reactivity was determined in parallel enabling the OH levels to be quantified empirically.

The experiments were conducted at the Technical University of Denmark (DTU) in Copenhagen. Four test subjects stayed in a special climate controlled chamber under standardized conditions. Ozone was added to the chamber air inflow in a quantity that was not harmful for humans but representative of higher indoor levels. The team determined the OH values before and during the volunteers' stay both with and without ozone present.

In order to understand how the human generated OH field looked like in space and time during the experiments, results from a detailed multiphase chemical kinetic model from the University California, Irvine were combined with a computational fluid dynamics model from Pennsylvania State University, both based in the USA. After validating the models against the experimental results, the modelling team examined how the human-generated OH field varied under different conditions of ventilation and ozone, beyond those tested in the laboratory. From the results it was clear that the OH radicals were present, abundant, and forming strong spatial gradients.

“Our modeling team is the first and currently the only group that can integrate chemical processes between skin and indoor air, from molecular scales to room scales,” said Manabu Shiraiwa, a professor at UC Irvine who led the modeling part of the new work. “The model makes sense of the measurements — why OH is generated from the reaction with skin.”

Shiraiwa added that there remain unanswered questions, like the way humidity levels impact the reactions the team traced. “I think this study opens up a new avenue for indoor air research,” he said.

"We need to rethink indoor chemistry in occupied spaces because the oxidation field we create will transform many of the chemicals in our immediate vicinity. OH can oxidize many more species than ozone, creating a multitude of products directly in our breathing zone with as yet unknown health impacts”. This oxidation field will also impact the chemical signals we emit and receive," says project leader Jonathan Williams, “and possibly help explain the recent finding that our sense of smell is generally more sensitive to molecules that react faster with OH.”

The new finding also has implications for our health: Currently, chemical emissions of many materials and furnishings are being tested in isolation before they are approved for sale. However, it would be advisable to also conduct tests in the presence of people and ozone, says atmospheric chemist Williams. This is because oxidation processes can lead to the generation of respiratory irritants such as 4-oxopentanal (4-OPA) and other OH radical generated oxygenated species, and small particles in the immediate vicinity of the respiratory tract. These can have adverse effects especially in children and the infirm.

These findings are part of the project ICHEAR (Indoor Chemical Human Emissions and Reactivity Project) which brought together a group of collaborating international scientists from Denmark (DTU), USA (Rutgers University), and Germany (MPI). The modelling was part of the MOCCIE project based in University of California Irvine and the Pennsylvania State University. Both projects were funded by grants from the A. P. Sloan foundation.