Christ received her Ph.D. in Chemistry from UCI in 1994. But that was just the start.
Lucas Van Wyk Joel
UCI Physical Sciences Communications 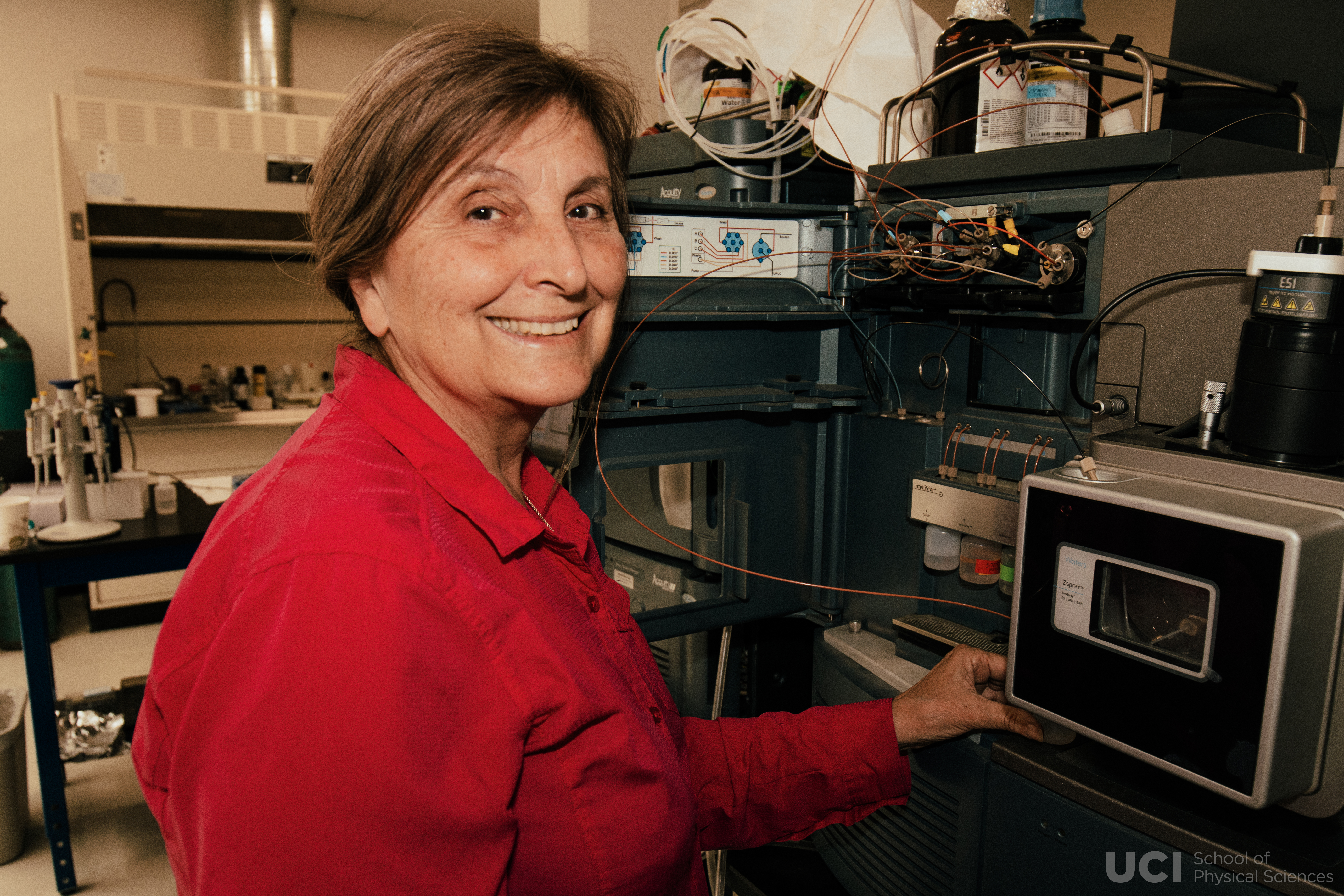 Alumna Dr. Marie Christ tinkers with a mass spectrometer in her lab not far from UC Irvine, where she graduated from the Department of Chemistry.

Marie Christ graduated from UC Irvine in 1994 with her Ph.D. from the Department of Chemistry. But she didn't move far; she works near Red Hill Avenue and Main Street, where she and her husband, UCLA alumnus Richard Christ, run a company called Mass Spec Lab that specializes in testing materials used in products such as biomedical devices and pharmaceuticals. One of the products they test are intraocular lenses (IOLs), which surgeons implant in the eyes of patients with cataracts. Once implanted, IOLs restore a patient’s distance vision to levels often better than their natural sight; patients who had to wear glasses prior to surgery often no longer need them after surgery. But ensuring the lenses are safe is no easy trick. "You have to be a little bit like Sherlock Holmes," Christ said. What her lab is looking for are what Christ described as "extractables and leachables" — substances that can unintentionally migrate from implanted medical products and into the bodies of patients where they can cause harm. Christ and her team hunt for such “residuals” using a battery of highly sensitive and accurate analytical tools, especially mass spectrometers that help them identify unknown substances like degradants that arise from product aging processes, impurities or additives like BPA. In one corner of their lab, the team has a set of IOLs sitting under a xenon lamp that’s shining ultraviolet and visible light on the lenses so the team can assess the degradational effects that sunlight might have. It’s work that evolved from the years Christ spent as a graduate student in the lab of Professor David Brant, where she honed her analytical skills studying chemical structures; in particular, she characterized a polysaccharide she recovered from sea urchin eggs whose detailed chemical structure is essential in sea urchin fertilization. It's a career that earned Christ a 2022 UCI School of Physical Sciences Alumni Hall of Fame award, and it’s a story Christ shares as a member of the UCI School of Physical Sciences' Industry Advisory Board — a group created in 2019 that, comprised of executives representing a range of companies relevant to the practical and industrial application of the majors offered through Physical Sciences, serves as a bridge between the academics happening in our departments and the wider world of industry. “I take being a member of the Physical Sciences Advisory Board seriously,” said Christ. “Not only is close interaction between the Southland’s science-based industrial community and the UCI campus essential to maximize their successes, but it is important on a whole other level. We need to strengthen data-driven science worldwide, and starting locally is a way to achieve this goal.”