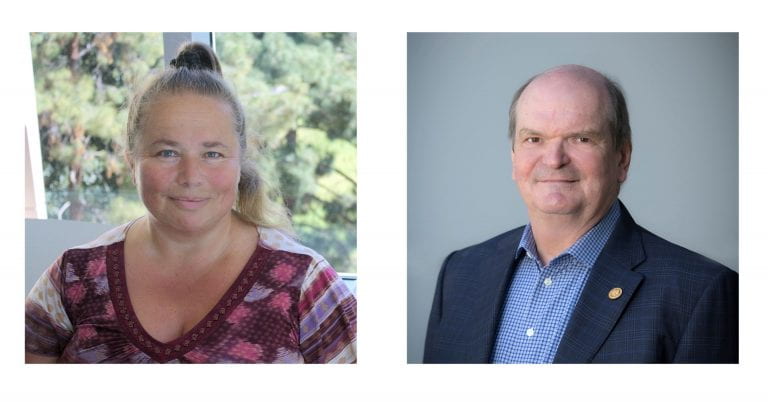 Irvine, Calif., May 4, 2022 – Two University of California, Irvine researchers have been elected to the National Academy of Sciences, one of the world’s most respected scientific organizations. Svetlana Jitomirskaya, Distinguished Professor of mathematics, and Krzysztof Palczewski, Distinguished Professor of ophthalmology, are among 120 U.S.-based members chosen this year.

“Congratulations to Svetlana Jitomirskaya and Krzysztof Palczewski on this exceptional achievement of being elected to the National Academy of Sciences,” said Hal Stern, provost and executive vice chancellor. “Their recognition serves as another indication of the innovative contributions and academic excellence of UCI faculty.”

Ukraine-born Jitomirskaya – after earning her bachelor’s, master’s and doctoral degrees at Moscow State University – came to UCI in 1991as a part-time lecturer. She was appointed to a full professorship in 2000. Her work involves the study of equations associated with quantum mechanics – the field in physics describing nature at the atomic and subatomic particle levels – and related mathematical inquiry.

“I am honored and pleasantly surprised to have been elected to the National Academy of Sciences,” Jitomirskaya said. “Having started at UCI as a fresh Ph.D., I am especially proud to now be joining my UCI colleagues who are members of the academy.”

Palczewski, who also serves as the Irving H. Leopold Chair in Ophthalmology and the Donald Bren Professor of Ophthalmology, is a prominent chemist, pharmacologist and vision scientist who has made important contributions to the understanding of the molecular basis of age-related macular degeneration and inherited retinal degeneration, advancing the creation of new treatments.

He came to UCI in 2018 from Cleveland’s Case Western Reserve University to establish the Center for Translational Vision Research at the Gavin Herbert Eye Institute, which is part of the UCI School of Medicine. A member of the National Academy of Medicine, he holds numerous patents and received the Bressler Prize in Vision Science in 2015 and the inaugural Beckman-Argyros Award in Vision Research in 2014.

“I am sincerely honored to have been elected as a fellow by the National Academy of Sciences,” Palczewski said. “Since my still relatively recent arrival at UCI, I have found the institution to be an extremely productive environment for research into eye diseases, and this recognition is further encouragement to pursue even deeper investigations into therapies to address blindness.”

To date, there are 2,512 active NAS members across the globe, and 25 of them – including Jitomirskaya and Palczewski – are from UCI.

About UCI’s Brilliant Future campaign: Publicly launched on Oct. 4, 2019, the Brilliant Future campaign aims to raise awareness and support for UCI. By engaging 75,000 alumni and garnering $2 billion in philanthropic investment, UCI seeks to reach new heights of excellence in student success, health and wellness, research and more. The School of Physical Sciences and the School of Medicine play a vital role in the success of the campaign. Learn more by visiting https://brilliantfuture.uci.edu/uci-school-of-physical-sciences/ and https://brilliantfuture.uci.edu/uci-school-of-medicine/.