Greenhouse gas and aerosol emissions are lengthening and intensifying droughts 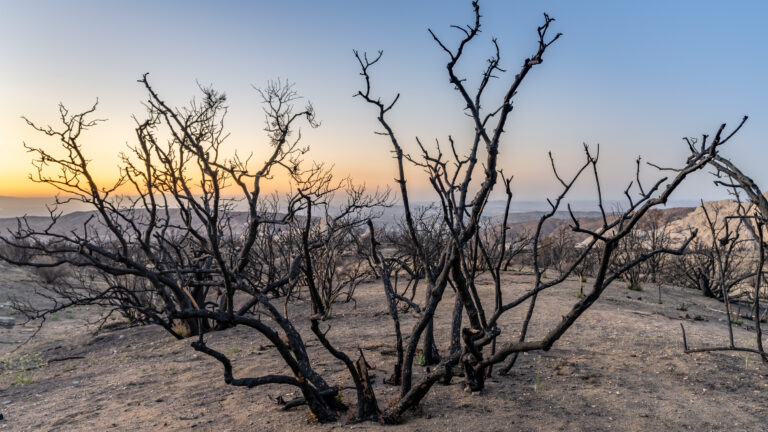 Droughts, such as the one impacting Devil’s Punchbowl on the northern slope of the San Gabriel Mountains in Los Angeles County, have increased in duration and severity over the past century. In a new study in Nature Communications, researchers in UCI’s Department of Civil & Environmental Engineering said that human-sourced greenhouse gases have been a significant factor in the growth and spread of the dry spells.

Irvine, Calif., May 17, 2021 — Greenhouse gases and aerosol pollution emitted by human activities are responsible for increases in the frequency, intensity and duration of droughts around the world, according to researchers at the University of California, Irvine.

In a study published recently in Nature Communications, scientists in UCI’s Department of Civil & Environmental Engineering showed that over the past century, the likelihood of stronger and more long-lasting dry spells grew in the Americas, the Mediterranean, western and southern Africa and eastern Asia.

“There has always been natural variability in drought events around the world, but our research shows the clear human influence on drying, specifically from anthropogenic aerosols, carbon dioxide and other greenhouse gases,” said lead author Felicia Chiang, who conducted the project as a UCI graduate student in civil & environmental engineering.

Chiang, who earned her Ph.D. in 2020 and is now a postdoctoral scholar at NASA’s Goddard Institute for Space Studies in New York, said that her team’s research demonstrated significant shifts in drought characteristics – frequency, duration and intensity – due to human influence, or what they call “anthropogenic forcing.”

The researchers used the recently released Coupled Model Intercomparison Project Phase 6 platform to run climate simulations showing how the length and strength of droughts changes under various scenarios including “natural-only” and with the addition of greenhouse gas and aerosol emissions.

The modeling experiments under natural-only conditions did not show regional changes in drought characteristics from the late 19th to late 20th centuries, according to the study. But when the team accounted for anthropogenic greenhouse gas and aerosol contributions, statistically significant increases occurred in drought hotspots in southern Europe, Central and South America, western and southern Africa and eastern Asia.

The team found that in examining the anthropogenic forcings separately, greenhouse gases had a bigger impact in the Mediterranean, Central America, the Amazon and southern Africa, while anthropogenic aerosols played a larger role in Northern Hemisphere monsoonal and sub-arctic regions. Chiang said human-emitted aerosols are essentially particulate matter that are small enough to be suspended in the air. They can come from power plants, car exhaust and biomass burning (fires to clear land or to burn farm waste).

“Knowing where, how and why droughts have been worsening around the world is important, because these events directly and indirectly impact everything from wildlife habitats to agricultural production to our economy,” said co-author Amir AghaKouchak, UCI professor of civil & environmental engineering and Earth system science. “Lengthy dry spells can even hamper the energy sector through disruptions to solar thermal, geothermal and hydropower generation.”

Co-author Omid Mazdiyasni, who earned a Ph.D. in civil & environmental engineering at UCI in 2020 and is now a project scientist with the Los Angeles County Department of Public Works, said, “To make matters worse, droughts can be accompanied by heat waves, and high heat and low moisture can increase wildfire risk, which is already significant in the western United States.”

Mazdiyasni said that while the research paints a gloomy picture of the unwanted impact of humans on the global environment, it points to a potential solution.

“If droughts over the past century have been worsened by human-sourced pollution, then there is a strong possibility that the problem can be mitigated by limiting those emissions,” he said.

This study was supported by the National Oceanic and Atmospheric Administration’s Climate Program Office and relied on climate modeling software provided by the U.S. Department of Energy.