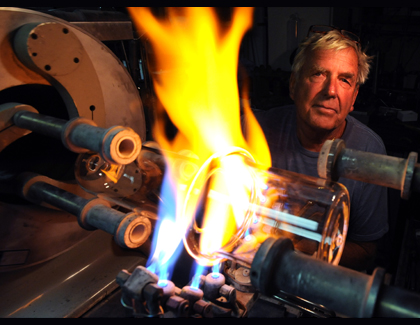 Jorg Meyer is known among UC Irvine’s physical sciences as the man who can fix or craft any glass instrument the imagination can concoct. Meyer’s glass blowing extends over three generations, three continents, and the forty-nine years of existence of the UCI campus. Born in Berlin, Germany, Meyer learned the ropes of glass blowing at his father’s shop – a shop that witnessed three generations skillfully perfecting the trade.

Before Meyer became UC Irvine’s renowned glassblower, he was “The Man Who Rode a Shark.” During his teenage years, Meyer fled the cold winters to explore the depths of the ocean in Australia. His reputation quickly flourished when he rode a 10-meter whale shark. While immersed in the wonders of the sea, Meyer also continued glassblowing at Canberra’s Australian National University.

In 1965, Meyer decided to look for new adventures in California. He arrived at East Los Angeles but soon heard rumors of a new college being built in nearby Irvine, where cattle still grazed the rolling hills.

The day that Meyer came to the UC Irvine campus to seek work as a scientific glassblower, it was none other than Noble Laureate F. S. Rowland who hired him on the spot. Little was known then of the journey on which he was about to embark at the brand new campus.

Behind the world-changing impact of UCI founding professors was the instrumentation for the research. From flasks, condensers, and vacuum tubes to distillers and canisters, Meyer’s apparatuses have helped propel scientific research throughout the years.

“He can do anything with glass,” says Hal Moore, former Dean and Professor of Chemistry. “If it has not been done previously he’ll find a way solve the problem!”

When asked in an interview about his most rewarding work, Meyer said:

“I’d have to say with Mario Molina and Sherry Rowland and their work on the ozone hole. In those days, they collected a lot of air samples in glass vacuum lines. Now, they’re using more stainless steel.” Rowland and Molina won a Nobel Prize in 1995 for demonstrating how chlorofluorocarbons destroyed ozone.

As a founding member of UCI’s School of Physical Sciences, Meyer has seen the UC campus and the region grow all around him. He was there when no more than seven buildings comprised the UC Irvine campus and were surrounded by California’s native chaparral and desolate rolling hills. “Everything was crammed in one building – biology, math, chemistry, and physics,” says Meyer.

So what about retirement for a glass blower who is north of 70? Well he tried that, but scientists needed him and he soon returned to the glass shop. When Meyer isn’t at UCI’s glass shop, you may catch him free diving, spearfishing, or boating. He also enjoys the sport of falconry. The future is bright for Meyer when he decides to “re-retire.” But the School of Physical Sciences will be left without a craftsman who can subdue the sands of time into glass for science.

Meyer is at the apex of his industry, which is unfortunately a trade which too few who can even hold a match, or a 12 nozzle hi-capacity universal hand torch for that matter, with the skills and technique he encompasses. Scientific glassware production is now a pool occupied by mass producers from around the world by people merely trained to operate industrial machines.

“What’s different about Jorg Meyer is that he’s also creative, and he can be involved in the conception of things,” says renowned organic chemist Larry Overman.

“We’ve been fortunate to have Jorg in the School of Physical Sciences,” says Dean Kenneth C. Janda. “As a founding member he’s not only helped shape our School, but he’s been key to the exceptional research that has brought us high rankings and international prominence.”