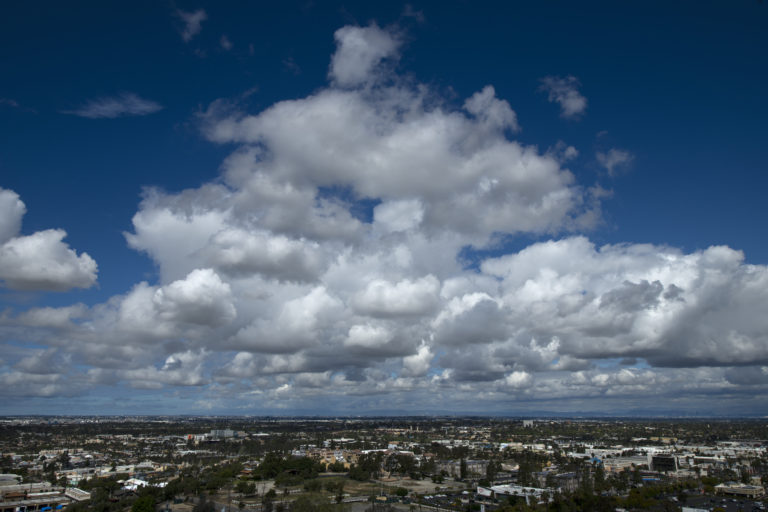 Clear skies over the Los Angeles Basin during the COVID-19 pandemic were accompanied by a more than 5-percent drop in carbon emissions. Climate scientists hope the trend continues to help meet Paris climate goals.

While 64 countries cut their fossil fuel emissions between 2016 and 2019, an international team of researchers, including an Earth system scientist at UCI, stressed that an even more pronounced reduction is going to be necessary to meet Paris Agreement goals to tackle global warming. In a study published today in Nature Climate Change, the team reported that a drop of .16 billion tons of CO2 per year amassed by those 64 countries during the period is only 10 percent of 1-2 billion tons of cuts needed throughout the 2020s and beyond to avoid exceeding global warming within the range 1.5°C to less than 2°C, which is the objective of the multinational accord. And while emissions decreased in 64 countries, they increased in 150 countries. Globally, emissions grew by .21 billion tons of CO2 per year during 2016-2019 compared to 2011-2015.

“COVID-19 lockdown measures over the past year led to a decline in global emissions by roughly 2 billion tons of CO2, a drop of more than 5 percent from 2019 levels,” said co-author Steve Davis, UCI associate professor of Earth system science. “But that pause cannot be expected to carry over in a post-pandemic world, especially if we continue to rely so heavily on fossil fuels.”

Davis said the coronavirus crisis and its expected aftermath present the world community with a unique inflection point. “We have been shown what can be achieved through widespread changes in our habits, now we need to implement policy that cements those new ways of doing things,” he said. The study authors suggested that drop in transportation sector emissions in 2020 provides an incentive to ramp up the large-scale deployment of electric vehicles and the encouragement of walking and cycling in cities.