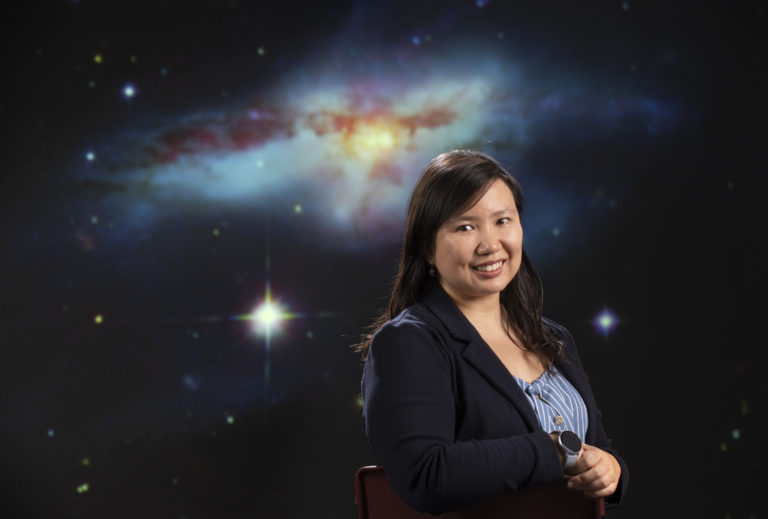 Vivian U, UCI assistant research scientist in physics & astronomy, is on a team that will conduct research with NASA’s much-anticipated James Webb Space Telescope, scheduled to be launched into orbit in 2021. U and her co-investigators will use Webb’s sophisticated infrared detectors and spectrographic instruments to peer through the dust in colliding galaxies.

If you were given a chance to study the cosmos with NASA’s much-anticipated James Webb Space Telescope, what would be your target? University of California, Irvine astronomer Vivian U knows what she plans to observe – the roiling stellar hatcheries that exist in a handful of places where galaxies have crashed into one another.

U belongs to one of 13 teams being afforded access to JWST data soon after the observatory is launched into orbit in 2021. As the successor to the Hubble Space Telescope, Webb is expected to be the world’s premier space science observatory. It will help astronomers solve mysteries in our solar system, look beyond to distant worlds around other stars, and probe the mysterious structures and origins of our universe and our place in it. The observatory is an international program led by NASA with its partners, the European Space Agency and the Canadian Space Agency.

With her co-investigators at Caltech’s Infrared Processing and Analysis Center, the University of Virginia and institutions across the United States, Greece, Chile and Japan, U will use the telescope’s advanced, high-resolution infrared capabilities to peer through the shroud of dust created by merging galaxy systems. Their ultimate goal is to better understand how these cataclysmic events influence black hole dynamics, star formation and other phenomena.

“I’m interested in delving into the detailed interplay between the supermassive black hole and its surrounding stars, gas and dust in nearby merging and active galaxies, and assessing the role that this interaction plays in deciding how galaxies evolve,” says U, an assistant research scientist in UCI’s Department of Physics & Astronomy. “Webb, with its sensitive infrared instruments, will allow us to examine this process in the often-obscured dusty nuclei of galaxy mergers at high resolution for the first time.”

U and her colleagues will perform the research as part of the Webb Director’s Discretionary Early Release Science program, which provides time to selected groups in the beginning stages of the telescope’s mission. The initiative has two goals: to give scientists experience in how to best use Webb’s capabilities while also generating bonafide science results.

The team will focus on four different galaxy pairs, each of which has exhibited intense star formation or an active galactic nucleus. As stars are being born in the merging galaxies, they generate heat in the surrounding dust, causing the emission of enormous amounts of energy in infrared light. With its powerful IR-sensing instruments, JWST will give astronomers an unprecedented view of the action.

In addition to infrared images, Webb will use its Near Infrared Spectrometer and Mid-Infrared Instrument to gather data from the centers of the four merging galaxies to determine what elements are present, their distribution and other factors.

“The images will tell us where things are, but spectra provide the really rich information: They tell you what is there and how it may be moving,” says U.

“This will be an amazing scientific opportunity for the astronomers who designed these Early Release Science programs,” says Aaron Barth, UCI professor of physics & astronomy. “Vivian’s project will give an unprecedented view of the ecosystem of gas flows, star formation and black hole fueling in merging galaxies.”