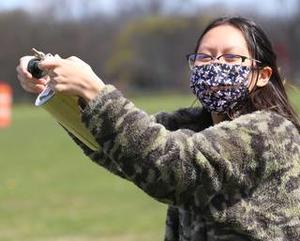 SARP intern Gabriela Vidad, a physics major from Adelphi University in New York, takes an air sample near her home.

Every summer since 2009, the NASA Student Airborne Research Program (SARP) has brought about 30 undergraduate STEM students from across the United States to California for an internship experience with NASA Earth Science research that includes flights on a research aircraft. This year with COVID-19 travel and social distancing restrictions in place, SARP might be grounded but the internship continues with new at-home data collection as well as the analysis of previously collected aircraft, ground and satellite data.

In February, 28 undergraduates were selected for the SARP class of 2020 from hundreds of applicants from U.S. educational institutions. In the weeks after their selection, it became clear that the ability of the students to travel to California and participate in the airborne research was uncertain due to the COVID-19 pandemic.

In previous years, SARP participants sampled and measured atmospheric gases and airborne particles as well as imaged the land and ocean using state-of-the-art instruments onboard a NASA aircraft. Students also collected environmental measurements on the ground across southern and central California. Student research projects have included tracking vegetation recovery after California fires and floods, mapping harmful algal blooms in coastal waters, and sampling the air to measure pollution across California.

Even if an in-person component of SARP does not happen this summer due to the pandemic, participants will still have access to the program’s eleven-year dataset to craft research projects with the support of a team of faculty advisors, NASA scientists, and research mentors. Students will work with their advisors online and will be encouraged to incorporate a variety of NASA satellite, airborne and ground-based measurements into their research projects.

To provide the 2020 SARP interns with a hands-on research experience in atmospheric science, as well as to better understand the unique environmental impacts of the pandemic, SARP leadership designed an at-home air sampling project to take advantage of the geographic distribution of interns across the United States.

The Rowland/Blake Laboratory at the University of California Irvine (where SARP is based following student flights on the research aircraft housed at Armstrong Flight Research Center in Palmdale, California) provided nearly 1,000 air canisters to send to SARP interns at home. Canisters were also sent to several SARP mentors, faculty and NASA scientists.

SARP alumnus and UC Irvine graduate student Alex Jarnot cleaned and prepared the canisters. SARP participants each received 24 evacuated canisters that they are currently using to take air samples of their local environment.

Collecting an air sample is a simple process that takes under a minute. Students go outside and turn the valve on the evacuated cannister to fill it with air. Their sampling locations can be on their doorstep or backyard, or they can also choose to visit local parks or other open outdoor spaces to sample as permitted by stay-at-home ordinances.

Canisters were mailed out to SARP participants in April before the official start of the program in June so that students could sample the air at the peak of stay-at-home orders while emissions were likely lowest in late April. As some states begin the gradual process of re-opening in May, SARP participants will continue to take air samples near their homes, allowing them to track the changes in emissions over the coming months as human and industrial activity ramps up.

Once SARP participants have collected their air samples by mid-June, they will mail the cannisters back to the UC Irvine laboratory where the samples will be analyzed for nearly 100 compounds including greenhouse gases such as methane and carbon dioxide, vehicular exhaust gases, and gases related to industrial activities. By the end of the summer, students will have access to all the gas concentration data collected by the entire group.

The 960 air samples from SARP participants will provide a rich dataset of local atmospheric gas concentrations related to changes in human and industrial activity during to the pandemic. “The variety of gases quantified will yield interesting information about local industrial processes as they come back online as well as providing ‘lower boundary’ gas concentration data for many different cities and towns across America,” said SARP faculty member Don Blake of UC Irvine.

“In some locations where industry does not play a big role, we expect to see changes in carbon monoxide and other vehicular exhaust gases. In other locations, we will likely see increases in industrial emissions like benzene or other solvents.” Quantifying these gas changes, as well as comparing different cities and towns to each other will provide a valuable perspective on the impact of the pandemic shutdowns on the environment.

In addition to the science payoff of the project, it is hoped that the experience of collecting this unique dataset will help to bond the group of SARP interns together as happens each summer when they work together to collect data from onboard a NASA aircraft.

SARP is funded by the NASA Ames Cooperative for Research in Earth Science and Technology, based at NASA’s Ames Research Center in California’s Silicon Valley.