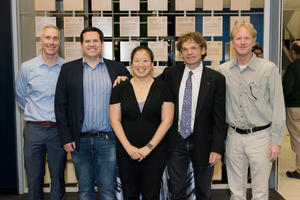 “I am very satisfied to have received the award,” says Rignot, who is Chair and Donald Bren Professor in the Earth System Science Department. “The most gratifying element of it is that it is attributed by a committee of experts out of my field, which means that some of what we do is appreciated and recognized by a broader community.”

The Senate gauges the whole of a researcher’s career before bestowing an award — but the scientists can point to moments in their work thus far that pushed their fields forward. Last year, Yang, who is an assistant professor of chemistry, published research that shines a light on a chemical reaction that reduces carbon dioxide concentrations in the atmosphere. “To accomplish this discovery, we took inspiration from enzymes, which perform these reactions very efficiently in nature,” she says.

Tait, meanwhile, who is Chair and Professor of physics and astronomy, gave a talk last year that led to him proposing that forces at work when the universe was young were different than forces at work today. “It kind of amazes me that someone giving me an undefined talk has inspired an interesting direction of physics research,” he says.